Russia fixes a reactor it initially refused to say was broken

Russian nuclear officials say they’ve fixed a generator glitch that more than two months ago shut down its prized, first of a kind AES-2006 reactor under a cloud of embarrassment and initial secrecy.

Published on January 31, 2017 by Charles Digges 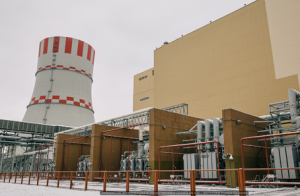 Russian nuclear officials say they’ve fixed a generator glitch that more than two months ago shut down its prized, first of a kind AES-2006 reactor under a cloud of embarrassment and initial secrecy.

The November 10 generator failure at the reactor, which began operating last year at the Novovoronezh Nuclear Power Plant south of Moscow, was kept under wraps by nuclear utility Rosenergoatom.

Official Russian news agencies reported the hiccup six days later, and referenced a statement from Rosenergoatom published the same day. Since then, however, the utility appears to have backdated its initial November 16 Russian language Web post on the incident to November 10.

When the company finally did publish information on the cause of the unexpected shutdown at the flagship reactor, also known as a VVER-1200, which Rosatom is building for a number of foreign customers, it cited a short circuit as the cause.

The apparently re-dated release emphasized that the shutdown was not unusual, and that it had no effect on the radiation safety of the plant. But the utility’s late reporting of the incident gave rise reports in local publications that the plant had suffered an emergency.

On November 15, Bloknot Voronezh, a Web site published in Voronezh Russia, ran a report citing an anonymous witness who reported hearing an explosion near the nuclear plant’s turbine hall, and who spoke of a burned out generator. The witness also reported burned out electrical equipment and a telltale loud noise. 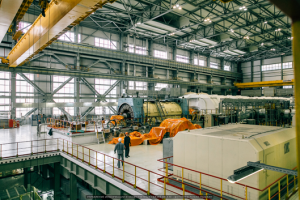 A view of the plant's machine shop and the repaired generator. (Credit: novnpp.rosenergoatom.ru)

Russia’s state nuclear corporation Rosatom has staked much of its reputation on the successful operation of the AES-2006, which had long been under development. Its launch at the Novovoronezh plant was initially scheduled for 2012, but there was a four-year delay in its construction.

When it finally did go online, Rosatom head Aleksei Likhachev visited the plant and hailed the reactor’s launch as “a big success for Russian atomic technology.”

On Friday, Andrei Timonov, Rosenergoatom’s information department director didn’t respond via email to questions regarding the staggered times it published what it knew about the shutdown, but he did say the reactor was again operating at 100 percent capacity.

His remarks were followed up by publication of the reactor’s newly repaired status on Rosenergoatom’s website, on the same day it went back on the grid.

Timonov said that all generators at the Novovoronezh and the Leningrad nuclear power plants are undergoing modernization efforts.

He confirmed that an electrical generator at the AES-2006 had experienced a short circuit, and further said the reactor, which is in pilot operation, had its generator repaired. He also said that the launch of a second AES-2006 reactor at the Novovoronezh plant would not be delayed.

It remains that both the AES-2006 reactor, which is Novovoronezh’s unit 6, and the next reactor from the line at unit No 7 are already seriously behind schedule. The original launch date for unit No 7 passed in 2016.

Previous to that it had been expected to come online in 2014 and 2015 as well, so in total, it’s not on time at all, but rather running five years behind.

But don’t tell that to Belarus, which is currently building an AES-2006 reactor, or Finland, Turkey, and Hungary, who all have orders in for one.

And Rosenergoatom’s initial impulse to not report the shutdown of Novovoronezh’s unit No 6 appeared to be an effort to keep things hushed up. Not until rumors of something far worse bubbled up in the local press did the utility attempt to correct the record by admitting a minor malfunction.

Even then, it apparently rewrote the date when the malfunction occurred on its press release to make it look like it had spoken up earlier. By turns, any of Rosatom’s customers should likely be prepared to receive backdated bills for late reactors when they finally get to building them.

Andrei Ozharovsky contributed to this report from Moscow.