Eight years after an earthquake at sea sent a towering wall of water hurtling toward Japan’s Fukushima prefecture and the six reactors of its nuclear power plant, the most famous accident since Chernobyl is only now beginning to subside.

Eight years after an earthquake at sea sent a towering wall of water hurtling toward Japan’s Fukushima prefecture and the six reactors of its nuclear power plant, the most famous accident since Chernobyl is only now beginning to subside.

Officials say the fruits and vegetables grown in Japan’s agrarian northeast are now safe to eat, as are the fish caught off its coasts. Radiation levels in the prefecture’s capital city, Fukushima, now compare to those seen in places like London and Hong Kong.

The number of workers at the site – which was once in the tens of thousands – has dropped dramatically to 5,000. The protective gear they have to wear is minimal, and the Tokyo Electric Power Company, or Tepco, which operates the stricken plant, now shuttles tours of journalists through the site to show how much the situation has improved.

Those, in any case, are the facts that Japanese nuclear officials have trotted out this year in what has become an annual ritual since the Fukushima Daiichi catastrophe stunned the nation ­– and the world.

But rebuilding the trust of the Japanese public may prove even harder than the clean up, thanks to a culture of nuclear cover-ups and denials that contributed to the disaster, and which continues to dog efforts to restart the country’s nuclear industry.

The scale of the wreckage

The twin earthquake and tsunami of March 11, 2011 killed 16,000 people. The reactor explosions that followed sent a cloud of radioactive cesium and iodine over much of northeaster Japan. Some 165,000 people were driven from their homes, many thousands of which still fear returning.

A clock stopped at the time the tsunami gushed in from the sea found in the destruction of a beach community in Fukushima. Photo: Nils Bøhmer - Credit: Nils Bøhmer/Bellona

In the immediate aftermath, millions of liters of water were pumped from the ocean to cool the smoldering remains of the reactors, which melted down within days of tsunami. The floodwaters poured back into the sea, devastating the region’s fishing industry. Huge specially built tanks near the plant still house over 1 million tons of contaminated water, which the government has yet to purify or dispose of safely.

Agriculture suffered, too. Crops and livestock were poisoned and food exports from the prefecture were forbidden in the years that followed. A number of countries, including China and the United States, still impose bans on Japanese produce. In total, Japanese officials estimate that some 14 million cubic meters of topsoil were contaminated. So far, collecting that soil and moving it to a centralized location has taken the work of 355,000 dump trucks.

One of the biggest casualties was the nuclear industry as a whole. In the wake of the Fukushima disaster, Tokyo stopped operations at the country’s remaining 42 reactors, shutting off a power source that supplied 30 percent of country’s energy. Under the stringent new codes developed for nuclear plants, only nine of those reactors have come back online.

All told, the devastation at Fukushima left an area the size of Hawaii to decontaminate. And while Japan claims progress, the costs of that progress are astronomical. Estimated costs for the cleanup range from $75.4 billion to much as $660 billion. Decontaminating and decommissioning operations at Fukushima plant itself are expected to last for another 40 years.

Still, the some 50,000 technicians working on cleanup at the Fukushima site are making some progress. They have recently used robotic arms to scoop up pebble-sized pieces of radioactive fuel at the bottoms of the three melted down reactors. This is a critical first step in the delicate task of extracting the molten fuel – work officials say will begin in earnest in 2021. 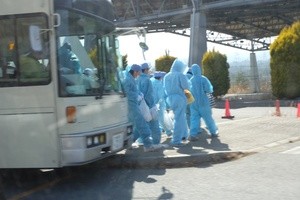 And technicians report they are making some advances in their struggle with contaminated groundwater, which threatens to push radiation into the sea. But a wall of ice coiled into the ground surrounding the plant is holding much of that back. The leakage of these waters, driven by the rains and floods of Japan’s typhoon seasons, has dropped by more than half, down from 470 cubic meters a day to 220 – only slightly less than an Olympic swimming pool.

But how Japan’s nuclear industry will repair its tattered reputation is still in question – and that owes to the trust it squandered in the immediate aftermath of the disaster.

Initially, Tepco refused to admit that the stricken reactors at the Fukushima plant had, in fact, melted down. Later the company apologized for the coverup, but the delay in revealing the full scale of the damage likely hindered a wider evacuation and endangered lives.

Those revelations were followed by a damning parliamentary report in 2012, which concluded that the Fukushima Daiichi accident was “profoundly man-made,” and caused by disregard for the country’s seismic instability. Japan’s nuclear industry, the report said, was too consumed with preserving the illusion that nuclear power was absolutely safe. 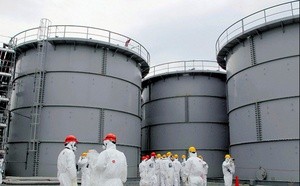 The bitterness of that revelation has stuck with the Japanese public. A recent poll by Japan’s Asahi Shimbun newspaper found that 61 percent of respondents were against restartingthe nation’s 38 idled reactors, with only 27 percent in support of the initiative.

But while numerous other developed nations, including Germany, are throttling the generation of nuclear energy, the return to nuclear power in Japan is a top priority for the government. The plan introduced by Prime Minister Shinzo Abe last year aims for 20-22 percent of energy to be produced by nuclear power by 2030, up from 2 percent currently. Meanwhile, the share of renewable energy is supposed to rise from 15 percent to 22-24 percent.

The cleanup grinds on

Back at the Fukushima site, there are still some 200,000 tons of nuclear waste to secure, but no one can agree where to put it when it is.

While Tepco did manage to remove 1,533 fuel bundles from the plant’s unit No. 4 reactor before December 2014, it still has to do the same for the hundreds more rods stored at the other three units.

To do so, workers will have to clear rubble, install radiation shields, and setting up robotic equipment to remove the rods.

Last year a 55-ton dome roof was built over plant’s third reactor, which will help facilitate the safe removal of the 533 fuel bundles that remain within its storage pool.  But the removal, which was supposed to begin this month, has been postponed. The spent fuel rods at the first and second reactors won’t be removed before 2023.

What Fukushima may look like decades from now, Tepco will not venture to guess. In some reports, the company is quick to say it won’t go the same route as Chernobyl, where an enormous containment structure now covers the remains of the reactor that exploded there in 1986. But the road to rehabilitating Fukushima, and making it inhabitable again, still appears to be longer than anyone might have guessed.