Last week engineering crews confirmed they had finished dismantling the world’s first floating nuclear power plant, deactivating its reactor and removing more than 680,000 kilograms of nuclear waste, which will now be sent to safer storage.

Published on September 24, 2018 by Charles Digges

Last week engineering crews confirmed they had finished dismantling the world’s first floating nuclear power plant, deactivating its reactor and removing more than 680,000 kilograms of nuclear waste, which will now be sent to safer storage.

No, no. Not Russia’s Akademik Lomonosov, who officials there will proudly tell you is the world’s “first” floating nuclear power plant, and which workers are currently fueling and testing in Murmansk. Rather it’s the Sturgis, which was built in American and actually claimed the title of world’s first floating nuclear plant as far back as 1968.

From then until 1976, the single loop pressurized water reactor on the Sturgis supplied power to the Panama Canal Zone, pumping out 10 megawatts of power.

The vessel was built as a response the canal area’s water shortages and weak hydroelectric plant, which made powering its 80 kilometers of ship-moving locks problematic. According to the Army Corps of Engineers, which designed the Sturgis, their floating reactor unit freed up more than 3 trillion liters of water for other uses in the Canal Zone. 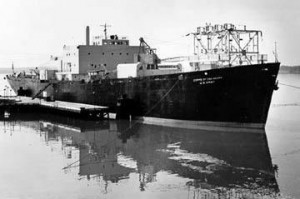 The Sturgis Credit: US Army

Unlike the Akademik Lomonosov, the USS Sturgis wasn’t originally conceived as a nuclear power plant. First it was a World War II naval cargo ship called the SS Charles Cugle, which sailed from 1945 until 1963, when it was requisitioned for the US Army for the military’s small-scale nuclear reactor project.

The floating nuclear plant was born when technicians cut the SS Charles Cugle in half, and inserted the nuclear reactor specially designed by the Martin Marietta Corporation. A turbine generator on board what was now the Sturgis provided power to a portable electric substation that travelled with the vessel.

After its retrofit with a reactor, the Sturgis could not propel itself, and became, like its offspring the Akademik Lomonosov, a barge dependent on tugboats to get it to where it was going. It might not have been elegant, but the Sturgis was the first of what was supposed to be many small, low output and easily deployable nuclear plants designed by the US Army for use wherever there was a waterway to park them.

The Sturgis operated without incident and was refueled numerous times over its short eight-year operation. When it reached the end of its service, the Army defueled it hauled it to the US state of Virginia, where it was stored to permit some of its radionuclides to decay further before its dismantlement near Galveston, Texas.

In some ways, the Russian government can be forgiven for claiming its floating nuclear plant is the first – a project which Moscow hyped throughout the 12 bumpy years of its construction. Because of its military nature the US government kept the Sturgis program as quiet as it could. It wasn’t even photographed but for a handful of times.

In the end, however, it was the only small scale floating nuclear power plant the Unites States ever built. The military program that put it together was disbanded in 1977, when it became clear the program was expensive and impractical. Other alternative energy sources were emerging, and these were cheaper and easier to deploy in remote regions than nuclear reactors could be.

After sinking some $460 million into the construction of the Akademik Lomonosov, whose dangers Bellona has documented well, one wishes the builders of Russia’s first floating nuclear plant had learned more from the Sturgis.