A forest fire that had raged for three days last week in the restricted zone around Chernobyl, scene of the world’s worst nuclear accident in 1986, was extinguished Thursday and no increase in radiation in the air was detected, authorities in Ukraine said. 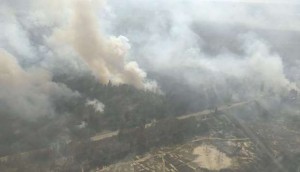 A forest fire that had raged for three days last week in the restricted zone around Chernobyl, scene of the world’s worst nuclear accident in 1986, was extinguished Thursday and no increase in radiation in the air was detected, authorities in Ukraine said.

“The fire in the exclusion zone was put out” in the evening, the Ukrainian emergency situations service said in a statement, adding that “radiation levels in Kiev, Chernobyl and the power plant have not exceeded normal levels.”

The explosion of the number 4 reactor at Chernobyl in April 1986 spread radiation contamination throughout Ukraine, Belarus, Russia and vast swathes of Europe. The 30 kilometer radius immediately surrounding the plant, called the exclusion zone, has remained uninhabitable ever since.

The wildfires broke out  last Tuesday morning in a dry grassy area of the exclusion zone, before moving to a forested area 10 kilometres from the power plant, burning some 10 to 15 hectares in total, according to Ukrainian authorities.

More than 130 firefighters battled the fire with the assistance of two planes and a helicopter that dumped water on the fire, the state emergency service said.

Nikolay Chechetkin, head of emergency services, said torches were found at the scene of the blaze last Tuesday. He later told Interfax-Ukraine that reports of deliberate arson remained unconfirmed.

Wildfires are a regular occurrence in the woods and grassland around the power station, and in the summer months, they blaze up and stoke fears of possible radiation releases. The last large wildfire near Chernobyl occurred in 2015 and burned for four days.

Often, the wildfires are sparked by careless campers. Ukraine’s National Police have opened a criminal proceeding, which might hold any culprits responsible for destruction of property. They are still investigating.
Surprisingly, the three reactors at Chernobyl that remained operational after the disaster continued to generate electricity until the power station was finally closed in 2000.

A giant protective dome was put in place over the fourth reactor in 2016. Ukraine, however, remains dependent on nuclear energy to supply more than half of its electricity.

While international efforts are underway to populate Chernobyl’s exclusion zone with solar power panels, it remains unlikely that Ukraine will be able to wean itself off coal and nuclear produced energy for several decades to come.