Officials in Northwest Russia have said they will soon begin removing hundreds of nuclear fuel assemblies, some of them damaged, from what was the country’s most radioactive nuclear fuel storage ship, the Lepse. 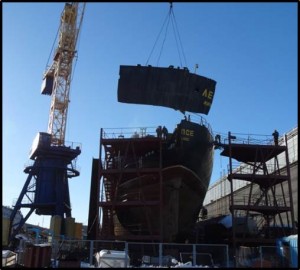 Officials in Northwest Russia have said they will soon begin removing hundreds of nuclear fuel assemblies, some of them damaged, from what was the country’s most radioactive nuclear fuel storage ship, the Lepse.

The fuel removal process is one of the most technically demanding nuclear legacy cleanup operations, and when it’s complete in 2020, it will represent decades of technical preparation and coordination of international funding in often trying political circumstances.

The new phase in the Lepse dismantlement is another remarkable development toward cleaning up naval and civilian nuclear debris in Northwest Russia. Later this month, the first containers of spent nuclear fuel will be hauled away from the notorious Andreyeva Bay.

The Lepse, which was used to unload spent nuclear fuel from Soviet nuclear icebreakers, spent more than two decades languishing at the Atomflot icebreaker port in Murmansk, just four kilometers from the city’s population of 300,000.

Its irradiated holds contain 639 spent nuclear fuel assemblies, many of which were damaged when the vessel refueled the Lenin Icebreaker in 1965 and 1967, and defy removal by conventional means.

The boat was finally towed from Atomflot to the Nerpa naval shipyard in September 2012, after more than a decade of strenuous and often tedious negotiations among Bellona, the Russian government and financial institutions – most notably the European Bank of Reconstruction and Development – geared toward ensuring its disposal.

Once it got to Nerpa, the 79-year-old Lepse ran into a traffic jam and bobbed neglected on the water until 2014, when, during foul weather conditions and thick fog, it was finally docked.

Officials last week said equipment for the final push on securing the fuel assemblies had arrived at Nerpa, and that their extraction would be completed by 2018.

Once the Lepse was in dry-dock at Nerpa, it was cut into five sections, or “storage packages”: the stern section, which is said to be relatively uncontaminated; the section with liquid radioactive waste tanks; the engine and boiler room, and two packaged bow sections, one of which contains the notorious 639 spent nuclear fuel assemblies.

When it was hauled out of the water onto a special slipway, the bow storage package, along with the side sections, was completely enclosed, heating equipment was installed to ensure climate controls for the spent nuclear fuel assemblies inside.

The vessel was also fitted with a communications system, a ventilation system and trace gas detection equipment to ensure safety for the 5000 technicians working on its dismantlement.

Radiation safety shields have also been put up around the vessel, and additional protections were added around the bow to block some 4600 microsieverts of radiation.

After the vessel was pulled out of the water onto a slipway, decommissioning engineers began forming the storage packages – essentially big blocks holing the remainders of the vessel, which will be shipped to long-term storage in Sayda Bay, a refurbished storage site on the coast of Kola Bay where dozens of reactor compartments from other nuclear vessels are kept.

The Lespe was built in 1934, served and as a floating unloading point for spent nuclear fuel from Soviet Icebreakers from 1961 to 1988. That year, it was retired from servicing nuclear icebreakers docked at Atomflot.

In 1994, the vessel and the dangers it posed caught Bellona’s eye, and the organization mobilized the European Union to allocate funding toward removing it from Murmansk harbor and safely dismantling it.

In September 2012, the Lepse was finally towed from its berth at Atomflot, but ran into two years of hassles at Nerpa while the Ministry of Defense and Rosatom wrangled for dry dock space, which, at the time, was taken up by the Leninsky Komsomol, Russia’s first nuclear submarine.

Those difficulties were finally resolved in October, when the Lepse was gingerly moved from the water to dry dock.

The Leninsky Komsomol, which had already been cut into three pieces, was welded back together as a museum piece.