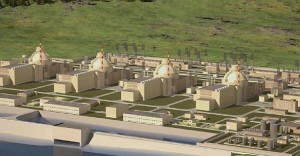 The $22​ billion plan to build four VVER-1200 type reactors was inked in 2012. But the deal so far skirts any of the typical considerations for storing or reprocessing the spent fuel and waste Turkey’s first nuclear power plant would generate once it goes into operation in 2022.

Andrei Ozharovsky, a Russian nuclear expert who works with Bellona and who has travelled to Turkey to discuss the nuclear plant’s plans, says failing to figure out what will happen with the spent nuclear fuel now could lead to a crisis later. 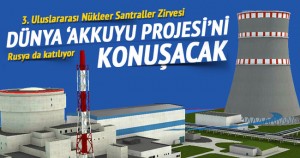 A flyer for a protest against the Akkuyu Nuclear power plant. (Photo: sabah.com.tr)

The agreement between Turkey and Rosatom created a joint stock company called JSC Akkuyu Nuclear, which is responsible for building the plant and eventually handling its waste and ​decommissioning later this century.

Rosatom has said the company submitted plans to Turkish nuclear officials offering some details of how radioactive waste and spent nuclear fuel could be dealt with. One possibility is an agreement with Rosatom that could repatriate spent fuel from Turkey to Russia for reprocessing.

But Ozharovsky points to two problems with that. First, he says that what plans there are for spent nuclear fuel at the plant are being developed in near secrecy.

Second, even if Russia does consider taking the Turkish spent nuclear fuel for reprocessing – which is not uncommon for plants the Soviets built in Ukraine and Bulgaria – Russia would by its own legislation be able to return to Turkey each year ​several tons of highly ​radioactive waste products arising from reprocessing Akkuyu’s fuel.

At best, then, whatever vague plans Rosatom and Turkey are considering for dealing with spent nuclear fuel from the Akkuyu plant might only postpone a radioactive waste crisis for Ankara, and a costly one at that.

And that’s not accounting for eventual political differences that could cloud Rosatom’s obligation to the Akkuyu plant, and Turkey would be wise to consider this because it’s happened before. In 2015, Rosatom halted construction

​preparations​on Akkuyu following the downing of a Russian jet flying sorties over Syria near the Turkey-Syria border.

The site preparation activities at Akkuyu resumed again shortly after Ankara’s position on Syria took a more Moscow-friendly line, but that was only the latest incident illustrating Russia’s growing comfort with using nuclear power deals abroad as a tool for political strong-arming.

At the height of EU-Russia tensions over Moscow’s annexation of Crimea, the Kremlin threatened to cut nuclear fuel supplies to Ukraine’s Soviet built reactors, raising the specter of Moscow forcing a nuclear accident. Rosatom eventually walked the threat back, but the lurid message was clear.