Published on July 15, 2015 by Alexey Pavlov, translated by Charles Digges 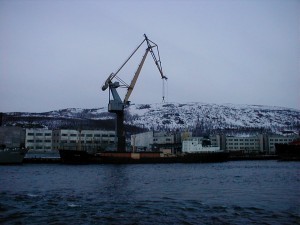 MURMANSK – Russia’s icebreaker port Atomflot has unloaded the second most dangerous parcel of spent nuclear fuel from the holds of the decommissioned nuclear service vessel Lotta.

The load of spent fuel, which spans 50 containers, is currently in on-shore storage.

The pace of the Lotta’s dismantlement seems to be keeping pace with a promise issued early last month by Sergei Kiriyenko, head of the state nuclear corporation Rosatom, to destroy 16 decommissioned nuclear service ships that served the navy and the country’ icebreaker fleet by 2020.

The latest news on the Lotta means the most important work on its long-delayed dismantlement, which began in 2003, has finally been completed. Workers have finally cleared all the spent nuclear fuel in the vessel’s holds, and it will now be stored in specialized containers in a newly built on-shore facility constructed for the purpose. 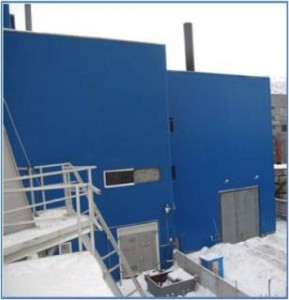 That the work is continuing bodes well for internationally assisted nuclear legacy dismantlement in Russia at a time when the West and Moscow are deadlocked in a political freeze, rumbling rhetoric and tit-for-tat sanctions and visa blacklists not seen since the Cold War.

The British government has spent some $26.6 million on the dismantlement operation for the Lotta as well as a similar derelict service ship, the Imandra.

The heavy usage during Soviet times of nuclear icebreakers like the Lenin, the Arktika, and the Sibir out of Atomflot meant the icebreaker base accrued a staggering load of spent nuclear fuel that currently can’t be reprocessed because the country doesn’t possess the technology to do so.

Much of this spent fuel was for years unloaded and stored on the Lotta floating technical base. But time began to wear on the vessel, and storing spent nuclear fuel on it became more dangerous.

Atomflot entertained the notion of hauling the entire vessel off the water and placing it on shore. Instead, however, the 12-year-old decision to unload it was implemented.

Mantula said that in order to ensure a compact, two tiered storage system, technology to separate active components of the spent fuel assemblies was developed and installed on the Lotta.

Still too early to send ship to scrap yard

An unloading point for the spent nuclear fuel was two years ago built along side the onshore fuel storage unit. There, the fuel will be stored in the long-term storage and transport containers. The unloading point isn’t yet in service, so the unloading of fuel continues aboard a special chamber on the Lotta itself.

“Because of existing technology, spent nuclear fuel from icebreakers before it is transported must be stored for three years at [Atomflot] in dry water cooled encasements,” Mantula said. “Only after that can it be sent on for reprocessing at the Mayak Chemical Combine, which is currently Russia’s only operating – and extremely controversial – reprocessing point.

Progress on other hazardous service ships

Bellona and the international community fought for more than two decades to have the ship removed from the Atomflot port, which is located a mere 4 kilometers from the center of Murmansk.

In September 2012, the Lepse was finally removed from Atomflot to the Nerpa military shipyard for complicated removal of its 639 spent nuclear fuel rods, many of which are damaged and will require as-yet-to-be invented technology to remove them.

After a series of traffic jams trying to get the Lepse onto land – as it’s dry-dock was occupied by Russia’s first nuclear submarine, the Leninsky Komsomolets – operations to saw the nuclear service vessel into pieces finally began in April, almost three years after its arrival.

The Ministry of Defense, which bears responsibility for the historic sub, has meanwhile agreed to turn it into a museum piece, the b-port Russian-language news portal reported.

Alexei Pavlov reported this story and additional reporting was supplied by Charles Digges.