No radioactive contamination from sunken subs in Barents Sea, say experts, but conditions must be monitored

Published on July 14, 2015 by Anna Kireeva, translated by Charles Digges

MURMANSK – Russian and Norwegian scientists have tallied up 20 years of radiation studies in the Barents Sea, Kola Bay, as well as results of algae, sediments and other biological samples taken from the Novaya Zemlya Peninsula, Sayda Bay and Andreyeva Bay.

The work has put a special focus on the K-27 nuclear submarine, which the Soviet Navy sank in the shallows of Novaya Zemlya 34 years ago.

The K-27 has been in the spotlight ever since Russian naval sources revealed to Bellona in 2012 a catalogue of radioactive waste dumped at sea over the course of decades.

Aside from the K-27, the Russian sources said, the Soviet Navy scuttled some 17,000 containers of radioactive waste, 19 ships containing radioactive waste, 14 nuclear reactors, including five that still contain spent nuclear fuel, and 735 other pieces of radioactively contaminated heavy machinery, in the Kara Sea, which neighbors the Barents Sea to the east. 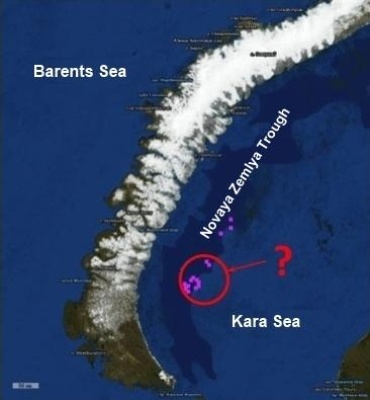 For more than two decades, Russian and Norwegian scientists have been studying the consequences of nuclear weapons testing on the Arctic Novaya Zemlya Peninsula, as well as potential threats from the sunken nuclear submarines other radioactive litter, and have been trying to determine what threats it all poses to the ocean and biological resources of the Barents Sea.

He told Bellona that this year, scientists took new samples to compare to those take 20 years ago, and added that, “that questions remain only in specific areas, specific bays, that we will have to pay attention to.”

But he complained that the local government was unwilling to support the studies.

“We need to school our own governors, they are completely illiterate in this issue,” he said. “I personally invited representatives of the local ministry of ecology to a conference but nobody showed up. It would be good if a few of these people understood the issue and showed support for our work.”

“We share the Barents Sea [with Russia], which possesses one of the world’s biggest harvests of commercial fishing, the volumes of which are high and inspire optimism – the fish here are among the best in the world.”

In 2012 and 2014 Russian and Norwegian scientists conducted a joint expedition to sunken nuclear submarines and containers of nuclear waste in the Kara Sea and along the eastern coast of Novaya Zemlya, particularly Abrosimova and Stepnogo Bays.

In 2012, Justin Gwynn, an expert with the Norwegian Radiation Protection Authority (NRPA) said the K-27 was lying on the bottom of the sea. He added no corrosion to the hull was discovered, though several parts of the outer hull were missing.

“We observed a slightly elevated level of cesium 137 near the reactor chamber, and cesium-137 and cobalt 60 were present in direct proximity to the containers” of sunken radioactive waste, he told Bellona. “But at a distance of 10 meters from the containers we found no elevated radionuclide levels.”

Gwynn also said that the levels of radionuclides in the waters were significantly lower than they were 20 years ago.

In 1968, the K-27, which ran on a liquid metal cooled reactor, suffered an accident. In 1981, its reactor was packed with a special preservative, and was towed to Novaya Zemlya and sunk in 33 meters of water.

In 2014, a joint expedition investigated the ill-fated derelict submarine, the K-159, which in 2003 sank during an accident while under tow from the Gremikha naval installation to the Nerpa shipyard for dismantlement. It went down in 238 meters of water, taking with it the lives of nine of the 10 sailors who were aboard to pump water out of its rusted hull. It also sank with 800 kilograms of spent nuclear fuel in its two reactors.

“There are a number of questions about this submarine,” said Andrei Zolotkov, director of Bellona-Murmansk. “

He raised concerns that the already weak hull of the decrepit submarine might have experienced further damage when it hit the seafloor after sinking, increasing the possibility of further corrosion of it’s hull and radiation released into the sea.

“There is no data on how hermetically sealed its reactors where [prior to the accident], though no real measures were taken in this respect, or if they were, no one mentioned them,” said Zolotkov. “It wouldn’t be desirable to hear about any clear leakages of radiation into the sea from this sub.”

What should happen to the subs?

Norwegian and Russian scientists have long discussed the fate of these sunken subs. NRPA’s Inger Eikelmann says his agency is working out a number of scenarios addressing what to do with the K-27. One is simply leaving it alone. Another is attempting to raise it, and then transport it to Kola Bay.

But the Norwegians are limited to suggesting options – the Russian government has to make the decision, and a number of Russian research centers are examining various methods of raising them.

“Finally, the Russian government has turned to face the problem of raising sunken nuclear subs,” said Vladimir Khandobin, a representative of RosRAO, Russia’s agency charged with handling nuclear waste. “At present, the Krylov institute is designing equipment that’s capable of working at depths of up to 2000 meters.

In Zolotkov’s opinion, the lack of radioactive leakage from the K-27’s still solid hull doesn’t mean it shouldn’t be retrieved from its shallow grave.

“Monitoring radiation conditions around the sub is all well and good, but shouldn’t be the end goal of this particular situation,” he said.

He suggested that “one could continue the monitoring for a few decades more and write a dissertation.” Instead, Zolotkov said, “A decision needs to be taken about raising it, and that’s it, and added, “You don’t want to wait until raising it will be complicated; It’s one thing to raise a submarine whose hull is still solid – but it’s another matter entirely to raise the reactors in a hulls that’s rusty and falling apart.”