Published on January 8, 2015 by Charles Digges 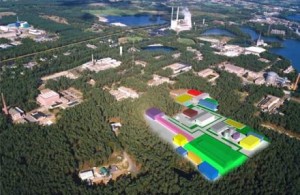 A mock up of the Myrrha reactor at Mol, Brussels. (Image: SCK CEN)

But even with the added safety features, the cost overruns are the least of environmentalists’ worries over what Bellona’s Alexander Nikitin said is a fundamentally flawed reactor design that was tried numerous times in Russia, and met with failure.

The design of the Myrrha, or Multi-purpose hYbrid Research Reactor for High-tech Applications will combine a MOX-fuelled, lead-bismuth-cooled fast reactor with a proton accelerator, allowing scientists to study methods of transmuting long-lived fission products and minor actinides to reduce nuclear waste, according to the Nuclearstreet.com nuclear industry news portal. But Nikitin said that: “Accidents with such reactors present far greater dangers than accidents in pressurized water reactors.”

Based at Belgium’s SCK CEN research center in Mol, the reactor – which has been dubbed as “the first of its kind” by industry media – will be comprised of a 57 MWt accelerator-driven system in which a proton accelerator will deliver a 600 mega-electron volt proton beam to a liquid lead-bismuth spallation target, according to the World Nuclear Association’s description of the project.

This is in turn would be coupled with lead-bismuth cooled subcritical fast nuclear core. It is intended to replace Belgium’s ageing BR2 research reactor, said the WNA.

The Myrrha’s 50-100 megawatt thermal plant would also allow research to further the development of heavy-liquid-metal-based reactors, as well as produce irradiated silicon and medical isotopes, said the nuclearstreet portal.

The Myrrha will replace the SCK CEN’s BR2 fast reactor. Its construction time table, according to Areva, France’s state nuclear corporation, which is leading the project, is between 2017 and 2021, with a full online deadline of 2025.

The cost overruns could delay that, Eloi Glorieux, an energy campaigner for Greenpeace Belgium, said in an email to Bellona.

Accord to De Tijd, the reactor was supposed to land at a cost of €960 million, but new estimates say it will come in closer to €1.5 million.

The Dutch-language paper quoted Belgian Energy Minister Marie-Christine Marghem as saying there were numerous issues driving the cost increase, not the least of which being that the previous estimation is five years old. Figures have now been adjusted for inflation. Further, additional security investments must be poured into the project to bring it up to post-Fukushima regulation. Cost overruns for security or not, Nikitin, chairman of the Environmental Rights Center (ERC) Bellona, and a former submarine captain in the Russian Navy, said the Myrrha reactor type, which were long in fashion on the Soviet Navy’s Alpha Class nuclear subs, is a very accident prone little unit.

Such liquid lead-bismuth cooled reactors, said Nikitin, were first run on highly enriched uranium, rather than the Myrrha’s proposed MOX.

“The Soviet Navy’s 30 year use of eight liquid lead-bismuth cooled reactors led to three accidents and endless malfunctions and incidents,” said Nikitin. He added that even five of the 27 watt land-based prototypes for nautical use ran into dire circumstances because their cores’ kept getting coated with oxides and other liquid metal alloys.

The high susceptibility of liquid lead-bismuth cooled reactors to accidents is a result of the coolant’s high content of the highly radioactive element polonium, which is formed when bismuth is irradiated, Nikitin said.

“Liquid lead-bismuth coolant is more active in comparison to just lead coolant by a factor of about 20 times,” said Nikitin. “If we add to that the reactor fuel [which in the case of the Myrrha] is a mix of uranium and plutonium, then it’s understandable that the consequences of a large-scale accident at the reactor would be catastrophic.