MURMANSK – SevRAO, Northwest Russia’s state nuclear waste handling division, reported in its year end results that remediation efforts at Andreyeva Bay are on schedule, the Volodarsky nuclear service ship was dismantled, and that Gremikha have been completed its most complex endeavor: dismantling the cores of liquid metal cooled reactors. 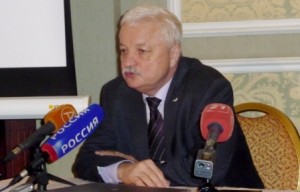 MURMANSK – SevRAO, Northwest Russia’s state nuclear waste handling division, reported in its year end results that remediation efforts at Andreyeva Bay are on schedule, the Volodarsky nuclear service ship was dismantled, and that Gremikha have been completed its most complex endeavor: dismantling the cores of liquid metal cooled reactors.

“I am more than pleased with the results of the year. We did the Volodarsky, this is very good,” SevRAO head Valery Panteleyev told a press briefing in Murmansk Friday. “I am delighted with the difficult work that we accomplished in Gremikha,” he added, saying: “We did not know that there was such a radiation burden. I’m certainly happy with the results for this year. I admire and am proud of my staff, who got the job done.” “We will continue this work by extracting nuclear fuel from underground storage,” said Panteleyev.

In 2013, the retired nuclear service ship Volodarsky, a nearly 100-year-old ship laden with tons of solid radioactive waste, was brought to Sayda Bay for dismantlement. The waste was to be offloaded from the vessel and positioned at the site for further processing after a series of complex engineering operations. The ship itself had to be sawed open. “We have accomplished this task,” Panteleyev told the briefing. “The danger of the Volodarsky – which bobbed at port in Murmansk – sinking is now gone. Today there is no longer any danger of radioactive substances spreading beyond these blocks. Today or tomorrow the last package will be put in place.”

Apart from that, SevRAO put two three-compartment reactor units on blocks at Sayda bay. The center conducted experimental work on one and two compartment units without waiting for construction of a workshop for the formation of one-compartment units to be completed.

“Imagine, in the next six to seven years, we will have 69 blocks in which reactor chambers containing medium level high level and low level radioactive waste that was once stored afloat will be located,” said Panteleyev. “And there was, however small, a danger of them sinking at dock. Or they could have been torn off and taken into the bay. Today in Northern Russia we don’t have half the blocks we had 6 to 7 years ago.”

Panteleyev said that the most important work had been completed at Gremikha on November 28. During 2010, technicians there removed the active zone of a derelict liquid metal cooled reactor. The 25 workers who performed the task received governmental recognition. This year, this active zone had to be dismantled. “I will say first off that this was very difficult because the level of radiological impact was simply huge,” said Panteleyev. “The most important part was performing the work safely.”

He said technicians assumed the work would take some two months, but it was protracted by “huge, unpredictable difficulties” thus prolonging the entire process to a year and a half.

But he said all was accomplished without any radiation exposure to the technicians and without any mishaps. He said that at the beginning, no one had any idea with out to dismantle active reactor zones of this type, and now Gremikha has dispatched with 10.

The so-called cassettes that were loaded into containers will eventually be sent to the Mayak Chemical Combine in the Urals for reprocessing. It was initially decided to manufacture 10 containers to transport these zones under an agreement with Italy. Next, it was expected a repository for their long-term storage would be built at Dimitrovgrad until further decisions on their disposition could be made. It’s now expected a hot cell will be constructed, and the active zones will further be dealt with within it before being sent for reprocessing.

The cost of this work was expected to cost between 5 and 15 billion rubles ($89 million to $268.5 million). Aside from constructing the containers, it was necessary to outfit the Italian-provided nuclear waste transport ship, the Rossita, to transfer the reactor chambers to Gremikha.

The ship required a nuclear and radiological physical control safety system for anchoring the containers, each of which weighs some 50 tons. Train cars for the transportation of such containers also needed to be built. SevRAO spent some 120-130 million rubles, including taxes, to dismantle the containers when they reached Gremikha. The Rossita. (Photo: Courtesy of Thomas Nilsen and the Barents Observer)

“It’s not just colossal state economic means, but the development of priceless technologies by us, “ said Panteleyev. “

He continued to say that the new techniques developed at Gremikha for dealing with liquid metal cooled reactors would be an essential ingredient in raising the K-27 nuclear submarine, which was dumped by the Russian navy off the Arctic Novaya Zemlya Archipelago in a mere 30 meters of water. The sub was sunken as trash after a 1968 reactor leak killed nine sailors.

The submarine has been the subject of numerous promises that it will eventually be raised due to the danger of a possible uncontrolled chain reaction in its reactors.

“Now we know exactly what to do with those reactors as soon as a decision to raise it and give it to us for dismantling,” said Panteleyev.

Russia’s plans for nuclear remediation in 2015 include the dismantlement of another reactor core at Gremikha. Panteleyev added that only one core per year can be broken down due to the high levels of radiation technicians could potentially be exposed to. Panteleyev said the remaining eight reactor cores at Gremikha and another to be imported from Sosnovy Bor near St. Petersburg, are expected to be dismantled over the next nine years.

This corresponds exactly with the number of years experts say a decision about what to do with the sunken K-27 must take.