ST. PETERSBURG – What can Russia do with the nuclear power reactors that have exhausted their useful life terms? Where will the decommissioning funding come from? What options can be offered to the workforce employed at these power plants? And how can Russia benefit from international experience in decommissioning old reactors? Representatives of environmental NGOs tried to find answers to these questions during a recent international round-table discussion in St. Petersburg.

Published on January 25, 2013 by Yevgeny Usov, translated by Maria Kaminskaya 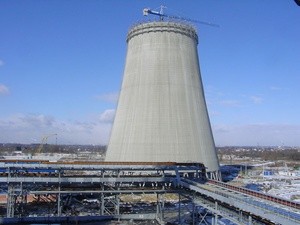 When the first nuclear power plants (NPPs) were being built in the Soviet Union, their designers didn’t have a very clear idea about what should happen with the reactors once their engineered life spans were over. If they did, then this issue found no reflection either in the plants’ project documentation or in the country’s long-term development plans. This may be why the Russian nuclear power industry today seeks to employ a variety of “modernizations” to extend the reactors’ life terms for as long as can be allowed – even as half of Russia’s 32 commercial reactors have been operating past their expiration dates, and still they remain in service.

There are also reactor units that have been taken out of operation: Units 1 and 2 of Novovoronezh and Beloyarsk NPPs were shut down over 20 years ago. Spent nuclear fuel has been removed from the reactors, but the actual decommissioning – dismantling the aged equipment, decontamination of the area, and other steps involved in the process – has been postponed indefinitely for lack of a comprehensive decommissioning concept and the needed funding.

“All the while, the time is approaching when dozens of reactors will all be nearing the end of their service life periods. And this process will have a snowball effect,” said Oleg Bodrov, chairman of the board of the St. Petersburg-based Zelyony Mir (Green World). “Russia doesn’t have enough experience decommissioning large nuclear power plants. This could trigger a serious socioeconomic crisis in those regions where the [expiring] NPPs are operated.”

Will anyone fly on a plane that will be unable to land? 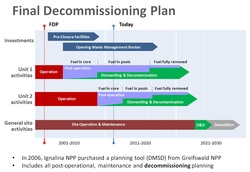 Furthermore, Russia’s nuclear authority seems to choose to treat NPP decommissioning as a strictly technical task – one that will ostensibly be solved simply by providing a set of rules and instructions. In fact, decommissioning a nuclear power plant is a process that also implies solving a range of environmental, social, and even moral problems. A serious and thorough approach requires preparing for this process as early as the NPP designing stage.

Taking off with no plan of landing anywhere – just how risky this can be is probably already demonstrated by the example of Leningrad NPP, in Sosnovy Bor near St. Petersburg, where four Chernobyl-type RMBK-1000 reactors are in operation. The license extensions that were already once issued for these units are nearing expiry, with the reactors’ prolonged service life periods due to end in 2018, 2020, 2024, and 2025, respectively.

But these dates may come much sooner. In the spring of 2012, serious problems arose at Unit 1, caused by swelling and cracking in the reactor’s graphite stack. The unit is still, to use the terminology of the power generation industry, being run in no-load mode. Media reports say the station’s operator company, Rosenergoatom, is considering the option of taking the unit offline ahead of schedule. Experts with Zelyony Mir believe similar fates may await Units 2, 3, and 4.

But it is unlikely that Sosnovy Bor is ready to undertake a large-scale decommissioning effort to solve the old Leningrad plant’s comprehensive problem.

Where will the funding come from?

Decommissioning a nuclear power reactor is a costly endeavor. Expenses that decommissioning Leningrad NPP’s units will entail are comparable with those incurred at Ignalina Nuclear Power Plant – a site in Visaginas, Lithuania, where two Soviet-built RBMK-1500 reactors were in operation and were shut down in 2004 and 2009, respectively, to comply with the European Union’s requirements for Lithuania’s ascension to the union. The two Ignalina units are currently being decommissioned, with Lithuania estimating the decommissioning costs for two units at EUR 2.5 billion. In Bodrov’s assessments, applying the Ignalina decommissioning scenario to the four old units of Leningrad NPP – including management of spent nuclear fuel and building repositories that will hold the graphite stacks – will require EUR 5 billion. Where would such an amount come from?

Officially, Russia maintains a special NPP decommissioning fund – a decommissioning reserve controlled by the State Atomic Energy Corporation Rosatom via a supervisory council and a governing board. By Russian law, Rosatom is the chief legal entity responsible for implementing decommissioning projects and maintaining the financial reserves accumulated for this purpose. But Rosatom is not obligated to keep specific records regarding these funds for individual plants, nor is it required to  disclose such information. This means that the accumulation of funding intended for the decommissioning of sites representing a particular hazard on an international scale is not transparent and thus falls beyond public control.

The nuclear industry itself seems to be in agreement over the lack of clarity with regard to how the decommissioning funds are generated. What remains clear is that no Russian nuclear power plant is capable on its own of raising the sufficient decommissioning amounts. As per the regulations in force – a document entitled “Rules of effecting by operator organizations of deductions paid to reserve funds maintained to ensure safety of nuclear plants at all stages of life cycle and development,” approved by Government Directive No. 68, of January 30, 2002 – a nuclear power plant’s deductions to the decommissioning fund account for 1.3% of the plant’s total revenue.

What are the options?

These decommissioning deductions will most likely have to be raised, and urgently. Important changes will also have to be introduced to the very mechanism of building the decommissioning reserve. Additionally, it may make sense to create a state-run management company and a special-purpose state fund whose board of trustees will include representatives of both the region and municipality where a particular NPP is located as well as representatives of the public, with decommissioning funding placed with mutual funds and other financial institutions in order to reduce inflation pressure. This funding will need to be accumulated at special accounts maintained by the Central Bank individually for each of the nuclear power plants in operation.

As experience accumulated in the world demonstrates, a lack of timely planning of the decommissioning process may increase a nuclear power plant’s decommissioning costs by up to 30%.  Most importantly, safe decommissioning is only possible when the three stakeholders – governments of all levels, the nuclear industry, and the concerned public – cooperate on an equal basis so that each can efficiently play their role.