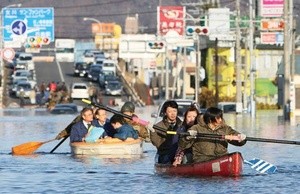 Evacuation orders by the Japanese government were also boosted later on Sunday from 140,000 to more than 210,000. Japanese officials said they had also ordered up the largest mobilization of their Self-Defense Forces since World War II to assist in the relief effort, the New York Times reported.

“What we are witnessing is a worst case design scenario,” said Bellona nuclear physicist Nils Bøhmer

“Japanese authorities had counted on fail safes and back-up power units to kick in to continue the cooling procedure in the reactors, but the fail safes were destroyed by the earthquake and 10 meter tsunami.,” he said, adding “So now they are improvising, which is not where you want to be in an incident as serious as this,” said Bøhmer.

On Sunday, Chief Cabinet Secretary Yukio Edano said that the cooling system had failed at the No. 3 unit and that core melting was presumed to be underway at both downed reactors. The cooling systems for three more reactors were down at nearby Fukushima Daini, but Edano said the situation was less dire there for the moment

A total of six reactors between the two plants are reported to be battling reactor coolant loss, said the ITAR-TASS Russian news agency on Sunday.

One hundred and ninty people have been reported as being in hospital with radiation poisoning, Slivyak said.

The failure of the cooling system failure at Fukuchima Daiichi No. 3 – which resulted from the worst earthquake, at 8.9, in Japan’s history and ensuing tsunamis – has Tokyo Electrical Power Co (TEPCO) workers scrambling to secure new sources of water to cool the mixed uranium and plutonium oxide, or MOX, fuel burning plant, Japan Nuclear and Industrial Safety Agency told a news conference.

Results of the effort to flood the Fukushima Daiichi ‘s reactor No. 1 are still unclear, but Bøhmer said that “If they manage to avoid a meltdown, that reactor is gone. They will have to decommission it – the same is likely to happen with reactor unit 3.”

With high pressure inside the reactors at Daiichi hampering efforts to pump in cooling water, plant operators had to release radioactive vapor into the atmosphere. Radiation levels outside the plant, which had retreated overnight, shot up to 1,204 microsieverts per hour, or over twice Japan’s legal limit, Edano told reporters.

“A shutdown of coolant to a reactor loaded with MOX fuel make the reactor much more difficult to control tha a reactor loaded with usual uranium fuel,” wrote Vladimir Slivyak, co-chair of Russia’s Ecodefence, in his regular updates on ***anti-atom.ru, noting that a disaster at the No. 3 unit would lead to plutonium fallout.

“Compared to radioactive fallout from a reactor working on uranium fuel, a much higher rate of illness can be expected as a result of irradiation,” wrote Slivyak.

“The worst case scenario would be to lose all ability to cool the core which would expose the fuel assembly to the air,” he said. The temperature would rise dramatically.

Should temperatures reach 1000 degrees Celsius, Bøhmer said, any cooling water begins to disappear and hydrogen beings to be produced.

At 2200 degrees Celsius, the uranium in the MOX fuel assembly would begin to melt.

One French observers group said it had received information that three meters of MOX fuel rods at Fukushima Daiichi’s unit three were exposed from boiled off coolant, but these reports could not be independently confirmed.

Meanwhile, the Japanese government struggled to cope with a rising tide of panic. Reports said that NHK, Japan’s public broadcaster, flashed instructions to evacuees: close doors and windows; place a wet towel over the nose and mouth; cover up as much as possible.

At a news conference, Edano called for calm. “If measures can be taken, we will be able to ensure the safety of the reactor,” he told reporters.

Elevated levels of radiation were reported in the Miyagi prefecture on Sunday, where the Onagawa nuclear power plant is located. Onagawa suffered a fire on Friday following the quake.

Fukushima’s reactors are rated to withstand earthquakes of a 7.9 point magnitude. The jolts on Friday reached 8.9, with as many as 100 aftershocks in following days, some reaching 6.8 points.

“Fukushima’s Daiichi’s reactor units No. 1 and 3 came at a pricetag of  $24 billion and will most likely never be used again,” wrote Slivyak in his regular update.