MINSK – How will Belarus build it nuclear power plant (NPP)? The answers that were given at the Atomekspo-Belarus 2011 exposition elicited a negative reaction from the public and neighboring Lithuania, and again brought to the surface serious gaps and scandalous details in the planning, engineering and construction of the Belarus NPP.

Published on March 10, 2011 by Tatyana Novikova, translated by Charles Digges 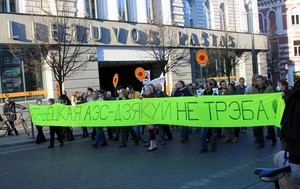 Promises from Russian Prime Minister Vladimir Putin to dish out money for the Belarusian NPP inspired national nuclear industry lobbyists. Deputy Energy Minister Mikhail Mikhadyuk, during the Atomekspo-Belarus 2011 exposition, which took place in Minsk from March 2 to 4, announced that Belarus NPP would be built regardless of environmental protests. And if bureaucrats issued earlier assurances to environmentalists that their concerns would be considered, Mikhadyuk’s remarks left no doubt that ecological worries are now unwelcome. Environmentalists were quick to react and sent an open letter to Russian President Dmitry Medvedev, requesting an immediate halt to Russian participation in the project. One of the reasons that civil society organisations are so insistently pressing Russia to not finance Belarus NPP is the breathtaking flaunting of national and international legislation, technical norms, the undemocratic adoption of the decision to build the plant, the opacity of the engineering and construction process, and a host of other violations.

It is worth noting that not only local environmentalists are opposed to Belarus NPP, which is slated to be built in Ostrovets in the Belarus’s Grodensk Region, 50kilometrs from Vilnius, Lithania’s capital. The commission responsible for performing the public environmental impact assessment, which included 15 Belarusian, Russian and Ukrainian scientists and experts, spoke out over a year ago on the inexpediency of building the plant at all. In spring of last year, the environmental ministries of Lithuania and Austria prepared negative evaluations of the project. At public hearings on the environmental impact assessment for neighboring countries, Latvian, Lithuanian, Ukrainian and Austrian experts spoke out against its construction. On April 26, Russian, Belarusian, and Lithuanian activists picketed the Belarusian embassy in Minsk, demanding the nuclear plant project be stopped and that alternative non-nuclear strategies be implemented for energy production. During the summer of last year, these activists were joined by environmentalists from Latvia, Finland, Germany and Sweden. This speaks to the fact that Mikhadyuk cast his comments not at a small group of local activists, but at a society of specialists and experts in European countries.

No less categorical where Mikhadyuk’s remarks to the Lithuanians on March 2 during Atomekspo-Belarus 2011. Speaking to the Belarusian news agency BELTA, he said officialdom in Minsk is observing International Atomic Energy Agency demands, and that Belarus has “completed discussions of the accounts of the environmental impact assessment with Lithuania.”

The next day, Lithuania’s foreign ministry issued a complete contradiction of these words. In its note, the foreign ministry said, in part, that, “The Ministry of Foreign Affairs of Lithuania is concerned by the intentional misinformation that Lithuania allegedly does not object to the environmental impact assessment of the planned Belarus NPP.

The announcement went on to confirm that the environmental impact assessment process is not complete, that answers from the Belarusian side have still not been received, and reminded Belarus of the conditions spelled out by the Espoo Convention concerning international consultations with neighboring countries when one intends to build an installation that could have border crossing environmental repercussions for others. The note from the Lithuanian foreign ministry is certainly not the first open letter to Belarus on its objections to the nuclear power plant project. The first came in December of last year.

In January, the Espoo Convention’s Implementation Committee officially contacted Belarus with a request to provide its neighboring countries with full information about the environmental impact assessment and to conduct a second round of hearings in these countries.

What kind of technology was Atomekspo-Belarus 2011 promoting, and in what direction?

The very name “Atomekspo-Belarus 2011” raises questions, as Belarus is neither a producer nor an owner of nuclear technology. And, apparently, realizing all the artificiality of this name, the organisers of the exhibition for the first time invited the participation in such an event of 20 Belarusian organisations, among which, aside from the government bureaucracies like the Ministry of Education, were representatives of the factories producing various technologies and equipment.

The task of the Belarusian manufacturers at the atomic exposition was explained to Bellona Web by Sergei Gorin, a representative of the Directorate of Construction of Belarusian NPP, who said: “Belarusian companies are here to represent their products and services in order to take part in the construction of Belarus NPP. Who will decide which of these companies will participate I cannot say, probably the Russian side.”

“But the Belarusians won’t allow anyone to pour the concrete under the reactor portion,” said one attendant at the stand for the Unified Institute ANB Sosny. Considering the fact that Belarus is requesting a line of credit for the construction of the NPP – including infrastructure – in the neighborhood of $9 billion, the Russians will also apparently be paying for Belarusian labor.

Such an approach would obligate the inclusion of Belarusian participants of the exhibition in the work force that will build the plant, from construction firms, the service sector, textiles, food services and a string of other sectors. But the did not exhibit apparently because this exhibit of Belarusian enterprise would have been nuclear in the direct, not indirect, sense of the word.

The nuclear industry’s wait for Godot

As everyone knows, Godot, of course, never comes, but everyone decisively waits for him until the end of the Becket play. This subject could not be more befitting to the construction of Belarusian NPP, which is shaping up exactly the same way. But the Belarusian nuclear industry is not the only one waiting for Godot: the Russian nuclear industry, specifically its St. Petersburg colleagues, is waiting as well. Yet, their presentations at Atomekspo-Belarus 2011 demonstrated that Godot’s appearance would make no sense and that that there is nothing further to expect from him. Upon attentive review of the ram-rodding of the NPP-2006 project – the project design on which Belarusian NPP is based – there are so many blind spots, such a quantity of unresolved problems that it is completely unclear who the project’s realization would benefit. After all, even a clean build of this NPP by experienced hands is extremely unprofitable and problematic.

Will the Belarusian NPP serve only the interests of the Russian nuclear industry?

This notion may seem strange: After all, it would be pleasant to consider that the industry or sector serve a specific purpose, specifically, electricity production. But in this situation it’s the opposite – a specific project will serve the industry. The fact of the matter is that NPP-2006 is an experimental, not a serial, project design. There are nowhere in the world NPPs built or working on the design of NPP-2006. It would do well not to confuse a number of experimental installations – which are still a good distance from completion, such at the Leningrad Nuclear Power Plant 2 or the Novovornezh Nuclear Power Plant 2 – with serial production.

The environmental impact assessment on the Belarus NPP concludes thus: “The Russian OAO Atomenergoprom [Russia’s state owned holding company that united the civilian nuclear industry] reports that Russia has not yet chosen in favor of one of two competing designs for NPP-2006. The developed designs for two nuclear electric stations of the NPP-2006 type are Novovornezh NPP 2  (Atomenergoprom, Moscow) and Leningrad NPP 2 (general contractor OAO St. Petersburg Scientific Research and Engineering and Construction Institute Atomenergoproekt). Apparently, only after the construction and commissioning of these two NPPs will a decision be taken on the basis of experience as to which design will be put into serial production.”

There is still nowhere to take and store the waste for the planned Belarus NPP. Containers for the transport and intermediate storage of waste from the NPP-2006 don’t even exist on paper, which is confirmed by a report by Vladimir Kritsky, a representative of OAO Parent Institute of the All Russia Scientific Research Institute of Complex Energy Technology (VNIPET in its Russian abbreviation). Kritsky said that at the last possible moment, these containers will be developed, built, tested and put into production.

A reprocessing plant for spent fuel from VVER-1200 reators – an untested type slated to be used with NPP-2006 stations – is, according to Kritsky, not yet under construction because there is no financing for it.

These details explain how specific projects (particularly Belarus NPP) serve the interests of the industry. Yury Voronezhtsev, former executive secretary of the USSR’s Supreme Soviet’s inquiry commission into the Chernobyl disaster and evaluations of responsible parties in the post accident period, told Bellona Web that: “To create from zero a whole production cycle for an experimental project like the NPP-2006 in order to check that it functions, that this or that decision is successful, is beyond limits. It is unjustifiably expensive to create even one or two NPPs by this design. But for the nuclear industry and its echelons, it has become a point of interest to create straight away a few installations in order to test them, collect their spent nuclear fuel and only then request financing for development and implementation of the elements necessary for dealing with this spent nuclear fuel.”

Voronezhtsev said that this practice is not native to Russia, but that doesn’t make it safe and economically reasonable.

“We must recall that the Chernobyl catastrophe was brought about by an experiment conducted on a working reactor on the night of April 26,” he said.

The Minsk exhibition confirmed the fears of environmentalists and other opponents of Belarus NPP.

The recent announcement by Sergei Kiriyenko, head of Russia’s state nuclear corporation Rosatom, suggesting that September be the starting date for construction on the Belarus NPP in Ostrovets raised a number of technical questions: Is it possible to begin work at this time if the working engineering documentation, the architectural plans, the contract to build the station, the intergovernmental agreements, and even issues on where precisely to build the station – and that according to Kiriyenko himself – have not been prepared or decided upon?

If construction of the installation begins under such circumstances – circumstances of building on experimental plans – then what will the results be? Can there be talk of safe functioning of the NPP if the time allocated to preparing the engineering documentation was less than six months, when it is necessary to have at least a year and a half to two? Moreover, the most important steps relative to formulating legal responsibly, oversight and legislation have not even been discussed – specifically, there is no national law regulating the handling of spent nuclear fuel. Gorin of the Directorate of Construction of Belarusian NPP told Bellona Web while at the Atomeskpp-Belarus 2011 that these questions can be answered if an intergovernmental agreement between Russian and Belarus is reached.

Yet, if a specific deal can influence the most important decisions from the point of view of economic and ecological issues of large countries, then the question of the deal’s legality arises.

Belarus and Russia are planning to sign the intergovernmental agreement on March 15.