ST. PETERSBURG – As Belarus pushes forward for the construction of its first nuclear power plant (NPP) in Ostrovets, close to the Lithuanian border, its former sister Soviet republic is indignant that Minsk has unilaterally completed the Ostrovets NPP environmental impact assessment (EIA) process and continues to ignore Vilnius’s objections to the project.

Published on December 19, 2010 by Maria Kaminskaya 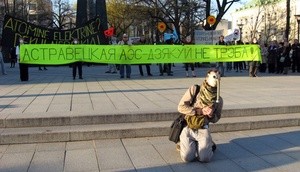 The Lithuanian Ministry of Foreign Affairs officially reminded Belarus of the objections it has to the project of a new nuclear power plant that Minsk wants to build, to an as-yet untested Russian project, in the town of Ostrovets, just some fifty kilometres away from neighbouring Lithuania’s capital of Vilnius. The ministry is furious that Minsk is ignoring Lithuania’s concerns – such as that the NPP will be erected so close to Vilnius, whose population will have to be evacuated should a serious accident occur at the plant – especially so since both Lithuania and Belarus are signatories to the UN’s Economic Commission for Europe’s Convention on Environmental Impact Assessment in a Transboundary Context – or the so-called Espoo Convention, signed in Finland in 1991.

No one writes to the Lithuanian government

On December 6, Lithuania’s foreign ministry sent an official note to the Ministry of Foreign Affairs of Belarus, protesting Belarusian officials’ claims that Lithuania had ostensibly removed all its objections to a report that Belarus had prepared on the potential environmental impact of its NPP. Vilnius demands that Minsk provide explanations of its silence and respond to Lithuania’s objections – which were officially extended to Minsk as far back as last July, but still remain unanswered.

In particular, Vilnius’s letter of December 6 says: “The Ministry of Foreign Affairs of the Republic of Lithuania has the honour of reminding Belarus that it underscored both during a meeting of representatives of Lithuania and Belarus on June 18, 2010, in Minsk, and later, in a letter of July 9, 2010, addressed to the Ministry of Natural Resources and Environmental Protection of Belarus, that the environmental impact assessment process [for the Ostrovets NPP] has not been completed.”

The Ministry of Foreign Affairs of the Republic of Lithuania expects in the nearest future an official response to the July 9, 2010 letter, and requests that Belarus provide explanations as to why statements have been made indicating that environmental impact assessment procedures have been completed with regard to the [Ostrovets] NPP, as well as that Lithuania does not have any objections to the [Ostrovets] NPP project.”

The foreign ministry reminds Belarus that, according to the principles spelled out in the Espoo Convention, the construction of such industrial sites as a nuclear power plant may only start after environmental impact assessments have been fully carried out and finalised by all countries potentially impacted by a given project. In particular, an appendix attached to Lithuania’s letter to Minsk says that the selection of the priority site for the future project alone is a violation of the Espoo Convention, if done before all proper consultations with neighbouring states have been completed.

Lithuania also officially reiterates one of the fundamental concerns it has regarding the choice of site Minsk has settled upon for its nuclear power plant. The fact that the projected site is less than 50 kilometres away from the Lithuanian capital, the foreign ministry says in its letter, is a threat not only to the population, but the state bodies of the country.

“Should an accident occur at Belarus’s NPP,” the ministry says in its missive, “we will have to evacuate not only Vilnius residents, but state institutions as well.”

The letter also points out that the potential harmful impact on the Lithuanian river Neris – the new NPP will have to use it to collect water for its reactor cooling systems in the upper reaches of the river – has not been analysed in full.

In all, Lithuania demands that Belarus respond to its concerns in the way it is expected to in accordance with the Espoo Convention and suggests that Minsk take a close look at other possible sites for the construction of its nuclear power plant.

In its letter of December 6, the Lithuanian foreign ministry was forced to refute several statements at once that were voiced in the Belarusian media by that country’s officials late last November.

On November 24, Belarus’s Yakov Kenigsberg, who heads the National Radiation Protection Commission with the Council of Ministers of Belarus, said that Lithuania had withdrawn all of its earlier objections regarding the environmental impact assessments of the Ostrovets project. This news – reported initially by the Belarusian news agency BELTA – appeared in Russian on the website of the Belarusian Ministry of Energy. BELTA quotes Kenigsberg as saying in its report: “We have complete mutual understanding, no problems at all. We have answered all questions that Lithuanian experts had regarding our EIA [study], and all problem issues have been resolved.” 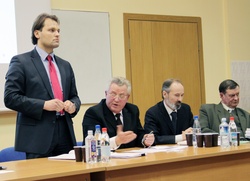 came for some kind of a promotional event, like a show. Like, as some said here already, to ‘put the tick in the box,’ to show that they presented something to the public.

“There were many physicists in the audience, many specialists,” Songaila said, “who were asking sound questions and wanted to receive sound answers. Instead, what they got was ten-minute-long harangues and no specifics at all.”

The Lithuanian Ministry of Environment’s Pollution Prevention Department director Vitalijus Auglys, who presided over that public hearing – his ministry also coordinates Lithuania’s activities in the framework of the Espoo Convention – is of the same opinion. Last June, Auglys told Bellona: “We have information, including photos taken at the Ostrovets site, where we see that works are in progress. […] If such works are being under way, then we take it to mean that the discussion of the environmental impact is just a formality.” 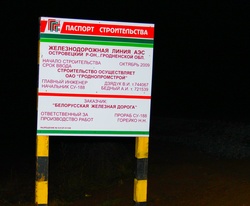 The Belarusian government apparently expected that just by going through some perfunctory motions – and simultaneously concealing from their neighbours that construction works at the Ostrovets site had already begun – they would be able to finagle their fellow Espoo signatories into approving the project, and get that approval quickly. In doing so, the authorities may have completely turned blind to the risk that this would likely strain Belarus’s relationships with other states and, possibly, international organisations as well.

When problems with Belarus’s neighbours started to come to light, the way out that the authorities opted for was to make an unsupported and premature announcement that the consultations involved in the Ostrovets EIA procedure had been successfully completed and that the project was no longer a disputed issue.

That much was in fact said by Belarus’s Andreyev as early as July – just like in Lithuania, Belarus’s environment ministry is the one in charge with coordinating ties with the Espoo Convention in that country. In that same July 5 story by BelaPAN, Andreyev said that the talks that Belarus had had with its neighbours to secure all the countries were on the same page about the project were concluded. Belarusian specialists had been proving during these talks that the future site would not have any transboundary impact on Lithuania, Latvia, Ukraine, Poland, or Austria, Andreyev said to BelaPAN.

“If they do not agree with our arguments, then we sorted out certain issues, but getting their approval – that is not necessary,” BelaPAN quoted the official as saying, though he did admit Lithuania was still objecting to the location.

According to Andreyev, however, current standards of international agreements in force make sure “there can be no questions raised” with regard to placing the NPP in Ostrovets.

Andreyev reiterated his position again in the November 29 report by Naviny.by, saying that Lithuania had been informed that Belarusian specialists had studied three sites for the future NPP and chosen Ostrovets. Belarus is entitled to opting not to act on Lithuania’s request to comment on this choice in detail, Andreyev said.

A legal assessment: Will Espoo be of any use? 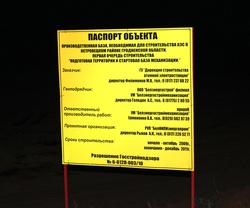 Andrusevich agreed that, in his view, Belarus was violating the Espoo Convention in the way in which it had selected and started construction works at the NPP location before the international consultations were fully concluded – a concern mentioned by the Lithuanian foreign ministry in its letter to Minsk.

“International procedures provided for by the Espoo Convention mandate Belarus’s obligation to conduct consultations with Lithuania at the stage of selecting a site – not after the selection has been made,” Andrusevich told Bellona. “This is predicated on the obligation to provide an EIA report accommodating alternative NPP locations. If, essentially, there are no alternative locations, this is a violation of the Convention.”

As for what constitutes concluding the consultations process as per the Espoo Convention, Andrusevich says the process is deemed completed when one of the countries renders its official and final decision to another.

“There has not as yet been any information that Belarus has presented its final decision on the NPP to Lithuania,” Andrusevich said.

He also believes that a direct complaint filed by Lithuania with the Espoo Implementation Committee might be an efficient means of settling the dispute between Vilnius and Minsk.

“Lithuania has all it needs to do that,” the expert said, adding: “Belarus has no choice but complete its EIA process as required by Espoo. If the process has been done with violations, it will have to be started all over again.”

Andrusevich also believes international disputes like this usually create an uncomfortable climate for an investor – even in this case, where the investor for the future Belarusian NPP is Russia’s State Nuclear Corporation Rosatom.

The reactor design chosen for the Ostrovets site, model VVER-1200 – a latest instalment in the Soviet-developed series of pressurised water reactors – is an experimental Russian design touted by Rosatom and Atomstroiexport, a Rosatom company in charge of intergovernmental cooperation agreements.

Russia’s top nuclear authority and the Russian government may be pursuing political motives by waning to land the Ostrovets NPP contract: As the costs of building a nuclear power plant of a capacity of around 2 gigawatts will likely prove prohibitive to Belarus at as much as €5 billion to €6 billion (the first reactor is projected to come online in 2016 and the second, in 2018), Russia may extend an offer of highly favourable credit terms to Minsk to build the plant. 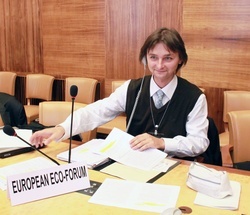 consultation: I’m sorry, but there can’t be double standards here, there is one standard. You believe two kilometres and 300 metres to be normal, so believe that 30 kilometres is normal, too,” Andreyev told Naviny.by.

Another dangerous delusion that Minsk seems to be dearly attached to – other than practical matters of energy and economy – is that a nuclear power plant may become Belarus’s trump card on the international scene. Experience, however, shows just the opposite is true: Small developing nations such as Belarus, while shooting to build nuclear sites in order to establish political immunity to impingement on their sovereignty attempted by stronger nations invite just what they are trying to escape – falling prey to increased international scrutiny.

This is not to mention the simmering vexation on the part of close neighbours and relations soured for an indefinite future.

Tatiana Novikov prepared this report, and Maria Kaminskaya contributed to it.