KALININGRAD/ST. PETERSBURG – Having put the frightening years of the Cold War behind it, the world has all but forgotten about the threat of nuclear proliferation – only to find itself staring right in the face of this ever escalating problem. While many politicians at least have the awareness to confront the issue and are finally advocating total nuclear disarmament, their noble goal may just be too remote a dream as long as mankind does not renounce nuclear energy completely.

Averting a Hiroshima déjà vu
The danger of global nuclear proliferation avalanching to explode in a Hiroshima-scale disaster was again brought to light at the inaugural two-day summit of the leaders of the recently launched International Commission on Nuclear Non-proliferation and Disarmament in Sydney, Australia, in late October. As was summed up at the meeting, covered extensively by the media worldwide, humankind had been “sleepwalking” on the issue of nuclear weapons for a decade.

The organization was first proposed by Australian Prime Minister Kevin Rudd after his June visit to the Japanese city of Hiroshima, which was devastated by an American atomic bomb in 1945.

The commission’s co-chair Gareth Evans said at the meeting that the dangers of nuclear arms had been largely overlooked as public attention was distracted by climate change and the world financial crisis, the online news publication The Australian reported.

“If we don’t get this right, we face a catastrophe on a massive scale,” The Australian reported him as saying.

In a quote cited by the news agency AFP, Evans added: “Unless we energise ourselves, unless we re-invigorate a high level political debate which is then accompanied by effective action, we potentially have very alarming consequences staring us in the face.”

Evans, Australia’s former foreign minister and now president of the Brussels-based International Crisis Group, said there were between 13,000 and 16,000 nuclear warheads actively deployed around the world and that it was “really a bit of a miracle” that a nuclear catastrophe had not occurred during the Cold War or afterwards, according to AFP.

“We are on the brink of […] a cascade of proliferation unless we are very, very careful indeed and find ways collectively to hold the line," AFP quoted Evans as saying.

IAEA at a crossroads
At least some of the blame for why that collective duty has been put on the back burner by the international community lies squarely with the International Atomic Energy Agency (IAEA), a UN entity that was put together on October 26, 1956 with the hope to reconcile the weighty tasks of promoting peaceful ways of application of nuclear energy, on the one hand, and curb the proliferation of global nuclear weapons arsenals, on the other. Fifty-two years later, in statements delivered last September to the 52nd Regular Session of the IAEA General Conference in Vienna, Austria, IAEA Director General Dr. Mohamed ElBaradei was forced to admit the agency’s resources were stretched far enough that it might fail to carry on the job it had been entrusted with.

ElBaradei did not mince words when he said in his report, called quite concisely “IAEA at a Crossroads”: “I must stand here today and let you know that all is not well with the IAEA.”

“In its first 50 years, the Agency has proven its value as a key instrument, both for enabling developing countries to use science and technology for development, and for maintaining international security. […] But we really have reached a turning point,” he continued.

Part of the problem, according to ElBaradei was “years of zero-growth budgets [that] have left us with a failing infrastructure” and that, for example, “no less than 90 percent of our nuclear security programme, which is aimed in part at stopping terrorists from obtaining nuclear material, depends on voluntary funding.”

He went on to say that, “political commitment to the goals of the agency needs to be renewed at the highest level to encourage the transfer of nuclear technology to the developing world and to strengthen safety and security, non-proliferation and disarmament.”

Nuclear terrorism: How tangible is the threat?
In his speech, ElBaradei briefly addressed the IAEA’s efforts in promoting peaceful applications of nuclear technologies but, as any classic double-edged-sword scenario goes, the benefits do not render the threat of nuclear proliferation any less perceivable. In the fifty-two years since the IAEA’s creation, the number of countries that possessed or still possess nuclear weapons has doubled.

The Nuclear Non-Proliferation Treaty (NPT), which became effective in 1970 and to which 189 countries are currently signatory parties, remains the most widely recognised arms control agreement. Still, though it remains a powerful implement in the IAEA’s tool-box, its leverage as a deterrent is limited and its authority has been questioned by some nuclear-capable nations.

In a 2004 statement called “Preserving the Non-Proliferation Treaty,” ElBaradei said:  In 1970, the assumption was that relatively few countries had the know-how to develop nuclear weapons. Now, with this knowledge spreading (thirty-five to forty countries, by some estimates), the margin of security under the current non-proliferation regime is becoming too close for comfort.”

“More countries have sought to master the nuclear fuel cycle, both for economic reasons and, in some cases, as a good insurance policy for a rainy day. Whatever the reason, this know-how essentially transforms them into what might be called a ‘virtual’ or ‘latent’ nuclear-weapon state. Experience has shown that a ‘choke point’ for nuclear weapons development is the acquisition of weapon-usable nuclear material,” were ElBaradei’s words in “Reflections On Nuclear Challenges Today,” a lecture he delivered in London at the International Institute for Strategic Studies in December 2005.

“If a country with a full nuclear fuel cycle decides to break away from its non-proliferation commitments, a nuclear weapon could be only months away. In such cases, we are only as secure as the outbreak of the next major crisis. In today’s environment, this margin of security is simply untenable,” ElBaradei said then.

However, Dr. Hans Blix, ElBaradei’s predecessor at the post of IAEA Director General and former UN weapons inspector, believes his former colleague’s approach may yet be too alarmist. In his view, it would be a mistake to include states such as Austria, Switzerland, or Nordic countries, into the camp of “latent nuclear-weapon states.”

Austria is a non-nuclear nation, as is Denmark, although nuclear installations or power or research reactors are in operation in Switzerland, Finland, Sweden, and Norway.
Blix is now chairman of the Weapons of Mass Destruction Commission (WMDC) based in Stockholm, Sweden, an entity which, according to its own description, was launched “to respond to the recent, profoundly worrying developments in international security, and in particular to investigate ways of reducing the dangers from nuclear, biological, chemical and radiological weapons.”

“In order to develop nuclear weapons, not only the resources, but the political will are needed, while the countries that I have mentioned have long made the statements that despite the opportunities that they have to do so, they will not produce nuclear weapons. What they should be called, rather, is ‘voluntary non-nuclear states,’” Blix said in an interview with Bellona*.

Australia’s Evans is a WMDC member, yet he seems to subscribe to that more ominous outlook maintained by ElBaradei.

“The devastation that could be wreaked by one major nuclear weapons incident alone puts 9/11 and almost everything else [in] to the category of the insignificant,” AFP quoted Evans as saying at the October Sydney meeting.

When only a few kilograms of radioactive filler are what a terrorist needs for a do-it-yourself dirty-bomb kit – and the safeguards in place across the world are hardly stringent enough to prevent theft of nuclear materials, while blueprints for making a dirty bomb are available for open access – the risk of proliferation of nuclear weapons by criminal or outlawed organisations remains a cause for severe concern.

According to data released by the IAEA in 2006, the previous four years saw a twofold increase in the statistics of interception of illegal transports of radioactive materials; nuclear contraband was retrieved in more than 300 cases across the world.

New commission, new political will
The new International Commission on Nuclear Non-proliferation and Disarmament, co-chaired by Evans and Japan’s former foreign minister Yoriko Kawaguchi, is exactly that kind of a push that may have long been called for to bring back awareness of the exacerbating issue of nuclear proliferation and jump-start the international dialogue and political cooperation needed to address it. The commission’s efforts are also a precursor to the 2010 Review Conference on the NPT, which will have been 40 years in effect by then. 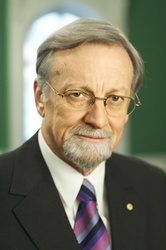 , former Secretary of Defence Perry said, ‘I have never been more fearful of a nuclear detonation than now (…) There is a greater than 50 percent probability of a nuclear strike on US targets within a decade.’ I share his fears.”

*Dr. Blix’s remarks, here and elsewhere in the article, first appeared in a Russian translation as quotes used for the Russian version of this story and have been back-translated into English for the purposes of this publication. They may therefore not be word-for-word renderings of his original statements.

Galina Raguzina wrote and reported from Kaliningrad and Maria Kaminskaya researched and translated from St. Petersburg.