Murmansk regional polluter shuts down another of its polluting facilities

A major Russian metalworks near the Norwegian border has ceased operations in a move meant to reduce emissions of sulfur dioxide that have long been an environmental sore spot between the two countries. 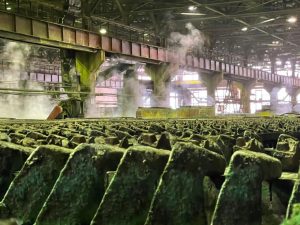 Inside the copper workshop at the KMMC.

A major Russian metalworks near the Norwegian border has ceased operations in a move meant to reduce emissions of sulfur dioxide that have long been an environmental sore spot between the two countries.

According to company officials, the closure of the copper workshop at the Kola Metallurgy and Mining Company (KMMC), a subsidiary of the giant Norilsk Nickel, owes to outdated technology, which makes capturing the pollution impossible.

A number of the company’s nickel-smelting furnaces were shuttered at the end of last year, marking an historic blow in a decade’s long struggle by Norwegian and Russian environmentalists to reel in the plant’s toxic, landscape-blighting contaminants.

The closures fall within the scope of a multi-million-dollar campaign Norilsk Nickel launched in 2016 to clean up its environmental record. At that time, company CEO Vladimir Potanin pledged that the company would spend some $17 billion on environmental upgrades throughout the production chain, with some $460 million of that flowing to the Kola facilities.

The copper production facility, located in the KMMC company town of Monchegorsk, began operations in 1979. Officials with the KMMC’s press office told Bellona that the elderly equipment was impossible to update so that it met new company-wide environmental standards.  The officials noted, however, that they had no plans to shutter other facilities they operate in the Murmansk region in the foreseeable future.

In the 42 years of its operation, the now closed metallurgical shop produced more than 3 million tons of anode copper and about 2.5 million tons of cathode copper. The metal has been used to manufacture a wide range of products such as cables, wires, pipes, roofing and much more. Most of the copper produced in Monchegorsk was used in Russia.

“Emissions of sulfur dioxide across the entire group of companies of the Kola division will decrease to 30,000 tons per year this year, and in 2022 they will be less than 22,000 tons per year,” KMMC general director Yevgeny Borzenko said at the facility’s closing ceremony.  “Of these, about 8,000 to 9,000 tons are emissions from the thermal power station of Monchegorsk. In other words, sulfur dioxide emissions from production operations will be less than 14,000. ”

Borzenko added that the company will continue to deal with targeted solutions to environmental problems, with the thermal power plants running the KMMC’s industrial facilities facing reviews for their emissions of sulfur dioxide.

“With regard to production facilities, today we are implementing efforts in two directions,” Borzenko said. “In the refining shop, we intend to install new filters for cleaning the exhaust gases from the fluidized bed furnaces of the refining shop. In the future, these gases must be disposed of in the sulfuric acid shop. We will continue to work point by point to reduce the negative impact of emissions into the atmosphere.”

A project for the liquidation of the metallurgical facility is under development. It is expected that the facility will be dismantled and the land on which it stood reclaimed.

Sergei Dubovitsky, a senior vice president with Norilsk Nickel, told reporters that a new copper refining workshop will eventually be built in Monchegorsk. It will have twice the capacity of the shuttered facility, which produced some 75,000 tons of copper annually.

The new copper facility, he said, would be built to environmental standards by enclosing metal processing in a sealed kiln that will trap almost all harmful gassed. The project also envisions the production of sulfuric acid from these gases.

Monchegorsk copper is obtained not from ore raw materials, but as a result of the separating matte, which the KMMC receives from its headquarters at Norilsk Nickel in northern Siberia. As a result, until other solutions are implemented, the temporary technological chain will, as explained by Borzenko, looik as follows:

“If at present one can speak of the Kola MMC as a ‘green’ subsidiary of Norilsk Nickel, then it is too early to talk about the company as a whole,” he said. “All the sulfur dioxide and heavy metals that streamed from the chimneys at the KMMC will now be an additional source of harmful emissions at the polar division of the company in Norilsk. ”

Company representatives told Bellona that, following the closure of the copper shop, the KMMC’s No 1 and No 2 refining shops will remain as the main operating production units. They provide the production of a significant part of commercial nickel.

Along with a new copper refining facility in Monchegorsk industrial site, a project is being developed for the construction of a new matte separation unit. It is expected to increase the production capacity for converting matte in the refinery without additional environmental impact.

Investments in both projects are estimated at over $1.3 billion Also in the plans is a project to modernize the capacities of the No. 1 nickel electrolysis shop, for an estimated $330 million.

“After the implementation of these planned projects, the KMMC is to become a refining hub of Norilsk Nickel for the production of nickel and copper,” the company said.