Shipping: Bellona Foundation and Damen to cooperate on low-emission designs

The Bellona Foundation has launched a three year partnership with the leading Dutch company Damen Shipyards Group with the goal of exploring and developing concept vessels for the future. The agreement will be officially signed on March 18 during an industry event in Stavanger. 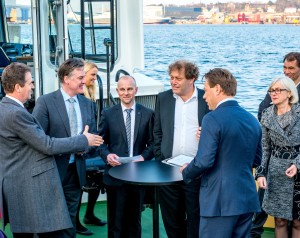 The Bellona Foundation has launched a three year partnership with the leading Dutch company Damen Shipyards Group with the goal of exploring and developing concept vessels for the future. The agreement will be officially signed on March 18 during an industry event in Stavanger.

Bellona and Damen both acknowledge that today’s global shipping industry will need to undergo substantial change in order to achieve its own climate and environmental objectives. Bellona and Damen have joined forces to work towards reducing the impact on the climate of a wide range of commercial and leisure vessels, as well as fleets employed by the aquaculture industry. “One of Bellona’s goals is to make the ships of the future independent of fossil fuels. This partnership will provide us with new knowledge on innovative shipping construction that will contribute towards achieving that objective, said Frederic Hauge, Bellona’s founder and president. “Today the global shipping industry emits large amounts of CO2, sulfur dioxide, nitrogen oxide and other gases harmful to the climate and environment, and the European fleet is large and in need of renewal. The next three years of partnership with Damen will make us better equipped to handle the challenges, both domestically and internationally.”

“We are very pleased to be starting this partnership with Bellona,” added Damen’s Remko Hottentot. “We have a strong focus on sustainability and the vision of each organization complements the other in terms of environmental awareness,” said Hottentot.  “At Damen the focus will be on creating alternative solutions that contribute to reducing harmful maritime emissions into both the air and the water. This will go hand in hand with initiatives to develop cost-effective efficiencies through reduced consumption of potentially harmful inputs such as fuel, paint and lubricating oil. During this long term relationship we foresee in general a valuable focus on co-operating in the creation of environmental technical sustainable solutions and the fostering of political support.”

Hauge believes that  Bellona, as well as Norway’s maritime community as a whole, can learn a good deal from Damen when it comes to developing the next generation of low-emissions vessels. He sees Damen as an international trendsetter challenging the Norwegian mindset in a positive manner.

From his perspective this partnership will improve  Bellona ’s capability to influence both the Norwegian and European shipping industries. Bellona has a 29-year track record of working on maritime political matters at a high international level, from their offices in both Oslo and Brussels.

The partnership with Damen represents an important milestone for the organization, giving it access to new knowledge and technology that will enable it to influence Norwegian and European politics even more than before.

Damen Shipyards Group operates 32 shipbuilding and repair yards, employing 9,000 people worldwide. Damen has delivered more than 5,000 vessels in more than 100 countries and delivers some 160 vessels annually to customers worldwide. Based on its unique, standardized ship-design concept Damen is able to guarantee consistent quality.

In addition to ship design and shipbuilding, Damen Shiprepair & Conversion has a worldwide network of 15 repair and conversion yards with dry docks ranging up to 420 x 80 metres. Conversion projects range from adapting vessels to today’s requirements and regulations to the complete conversion of large offshore structures. DSC completes around 1,500 repair and maintenance jobs annually.