MURAMANSK – Among the key assertions of a new Bellona report, presented Tuesday in Murmansk, is that Russian industry in the far Northwestern Barents Region must urgently be modernized. 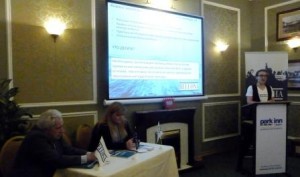 MURMANSK – Among the key assertions of a new Bellona report, presented Tuesday in Murmansk, is that Russian industry in the far Northwestern Barents area must urgently be modernized.

“One of Bellona’s most important tasks, 30 years ago as well as today, is defining and showing existing environmental problems and presenting their solutions,” said Hallstein Havåg, Bellona’s director of policy and research.

The report, which was a year and a half in the making, seeks to do just this – drawing the attention of authorities, academia, business and the public to the pressing issue of industrial pollution in Russia’s north. The Barents area has significant reserves of energy, minerals, forest and biological resources. The development of natural resources and the associated growth of production and industry promotes social and economic growth. But it also has a negative impact on the region’s environment.

Statistics say that emissions of harmful substances into the atmosphere prevail in three of the largest regions in the Barents area of Russia: The Murmansk Region, the Republic of Karelia, and the Komi Republic have in recent years seen precipitous increasing in industrial emissions.

The reports main findings suggest that modernization of production should be the main task of the area’s industrial enterprises, as the current level of modernization and implementation of new technologies excessively lacking.

“Cosmetics don’t help,” Gradislava Potapova, an adviser to Bellona’s Russia group, told the gathering. A global modernization of production and the creation of conditions in which ecological production will be more favorable than the payment of fines for pollution is necessary.’

Popatova cited the construction of a plant for Tesla electric automobile batteries. These require vast quantities of aluminum and nickel, both of which are produced in abundance in the Murmansk Region.

In March 2014, Bellona drove a Tesla to the polluted Kola Peninsula town of Nikel. (Photo: Bellona)

Tesla, however, insists that each level of its production be powered exclusively by renewable energy. Within the next couple of years, Tesla further says it intends to double its worldwide production of electric car batteries. But Tesla, whose cars produce no emissions, will only buy its raw materials from companies that similarly seek to have a low ecological footprint.

This means that suppliers must guarantee cleaner production. Norilsk Nickel, which produces one-third of the world’s nickel, could potentially be a supplier for Tesla’s battery materials if it takes the plunge into cleaner technologies. That would lead to a nosedive in the company’s output of sulfur dioxide in its hometown of Norilsk as well as the Kola Mining and Metallurgy Combine (KMMC), Norilsk Nickel’s daughter company in the Murmansk Region.

Of all the industries described in the new report, only the KMMC showed any interest in the report or in entering into dialogue with Bellona.

“We are extremely grateful to Bellona for such attention to our company and for its interesting report,” said Mikhail Shkondin, the KMMC’s head of environmental monitoring and protection.

Shkondin described the KMMC’s environmental efforts, but singled out what he called inaccuracies in the report, and a called on Bellona to expand on the theme of pollution in Russia’s Barents Region by describing international pollution problems across all of the countries of the Barents Region, like Norway and Finland.

“It is good that this new report is helping to build dialogue between environmentalists, government, industry and the public,” said Lindeman. “It is important to remember that the environment is not politics. I believe that industrial and economic development must not contradict each other.”