MOSCOW—The winners of the recent “Innovation in Ecology” sponsored by Russia’s Expert magazine included technology to turn coal processing waste into a usable energy source, a system to protect buildings from flooding and emergency spills of liquid hydrocarbons, and a super-light airborne apparatus for monitoring industrial emissions. 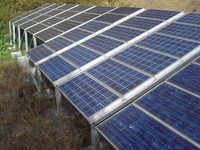 The awards, which ran as high $15,000 for first place, were presented earlier this month in Moscow on February 10th.

“The task of the competition and the conference, we think, was to establish a dialogue between the state and business.”

NTTs Zapsibpromtekhnologiya representative Oleg Gromov added: “This means that the competition finalists will receive a small grant from the sponsors, and the other projects will remain on paper,” added.

First place went to Sibekotekhnika, based in Novokuznetsk, Kemerovskaya Oblast, for their project entitled “Environmentally friendly technologies for complete recycling of coal slack and waste from coal-preparation plants by burning suspension fuel.”

The project is based on processing coal waste using new technology to give it the qualities of liquid fuel so that it can be transported in cisterns, flushed through pipes, and stored long-term in closed reservoirs. Most importantly, the new liquid fuel is cheaper than fuel oil and natural gas. In addition, production of the new fuel will allow coal-preparation factories to get rid of heaps of coal waste.

The project was the subject of great interest, and many of those present at the competition expressed doubt over the “environmental cleanliness” of the recycling technology.

“It’s hard to imagine a technology for reprocessing coal waste that doesn’t produce waste itself. Even with minimal waste, you can’t escape the release of dangerous gases, particularly benzapilene,” a representative from the Tyumen Architecture and Construction University—also an entrant in the competition—told Bellona Web.

The Tyumen University’s project for protecting buildings from flooding and emergency spillages of liquid hydrocarbons took second place. The project designers said the rapid-reaction barriers they had designed are soft cylindrical sheaths that ensure that accidents and natural disasters involving liquids and hydrocarbons can be dealt with rapidly.

Representatives of multinationals and major companies operating in global markets said that they are interested in environmental conservation. They underscored that after Russia ratified the Kyoto Protocol, environmental indicators in industry had become one of the most crucial indicators of production quality.

“For us, the most important thing is the people working at the enterprise, their safety and good working conditions, as well as the environment,” said Oleg Burkatsky, Rusal’s deputy general director for industrial safety and the environment.

“We are putting money on rational production, and this means modernising old technologies and introducing environmentally clean developments.”

Like other speakers from big business, however, Buratsky did not specify how the results achieved by the programmes introduced squared up with generally accepted norms.

According to Lutsenko, a huge number of indicators—northern coefficients, economic significance coefficients, and so on—only get in the way of proper environmental programmes, for which there simply isn’t enough money. For example, the state takes additional payment if an enterprise uses polluted territory.

“What do environmental users do?” asked Lutsenko. “Pay another tax? No. Instead of cleaning up the territory in question, they move to another place where they can pay less for using natural resources.”

In 2002, the Kola Mining and Metals Company, a subsidiary of Norilsk Nickel, got a Supreme Court ruling cancelling its payments for environmental pollution and ordered that money paid for pollution since January 1st 1999 be returned to the polluting enterprise.

According to Russian Kommersant daily, the Norilsk Mining and Metals Company, another Norilsk Nickel subsidiary, was one of the 10 worst offenders for environmental pollution in Russia in 2002.

Nikolai Ryabov, head environmentalist at Ilim Pulp’s Kotlass facility, ended his report by saying: “I have worked in this sphere for 15 years, and I know how the bodies that control us think. The more emissions a plant makes, the better—because they have to pay more.”

All the business representatives asked for “at least part of the money going into the state treasury” to be returned. If they achieve this, they said, the funding obtained could be used to modernise old equipment, as well as put internal investment and development of new environmental programmes.

State officials present—from the State Duma’s Natural Resources and Environmental Usage Committee to the Natural Resources Ministry to the state environmental oversight body—talked about a raft of new bills. When asked by reporters whether business liked the sound of these bills, Lutsenko said: “There is hope”.

Evgeny Shvarts of the Worldwide Fund for Nature suggested moving “from a reactionary approach in environmental politics to a proactive one.”

He said the current approach was a peal of thunder that meant something had to be done. The only “proactive” project among the winners of Expert’s annual innovation competition was the “Kyoto forests” project presented by the Russian Centre for Environmental Policy, which aimed to plant as much new forest as possible. The more forest around an enterprise, the fewer the gas emissions—and elegant solution that was labelled by conference participants “easy and with taste."