Presented CO2 handling to the EU

– We want the polluters to be a part of the solution rather then part of the problem, declared Egil Holte from Bellona, during the Bellona workshop on hydrogen in the European Parliament on March 20th. He followed up by presenting Bellonas work on CO2-handling to politicians and bureaucrats from the EU-system.

Published on March 22, 2003 by Sondre Grinna, translated by Hanne Bakke

Egil Holte said the EU still has a road to travel to fulfil their Kyoto-commitments. EU has taken upon themselves to reduce their emission of greenhouse gasses (GHG) by 8% from 1990 to 2008. However, the really big challenges will come in the next round. The Kyoto commitment is as far one could reach politically at that time. The UN climatic panel says we need to reduce the emissions by 50- 80% to control the climatic changes. This does not only require improvement of todays technology, but also new ideas. 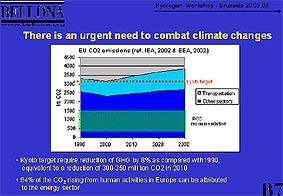 Hydrogen and electricity as energy carriers gives us the possibility to reduce the CO2 emissions substantially. Using these energy carriers will not give emissions of health damaging substances or GHGs. But the carriers have to bee produced. A crucial point for the energy carriers to give reduction in GHG emissions is therefor that they can be produced without emissions. 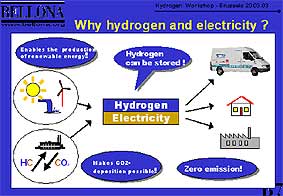 Primarily we imagine production from renewable sources. This can be sun, wind, biofuel, hydropower etc. By this we have a clean and renewable energy source.

It is also possible to produce hydrogen and electricity from fossil sources. If this is to be a clean energy source, we have to ensure CO2 handling at the manufacturer. This is only possible in larger power plants, not on every car in particular.

Like clean production of hydrogen is an absolute condition for hydrogen to have a positive environmental effect, we need a clean energy carrier to transport the energy produced renewable, or with use of CO2 storage. We are therefor required to use hydrogen and electricity as fuel in future cars if we are to use clean energy production to supply the transport industry with energy.

Hydrogen has advantages by its ability to storage, this is not possible for larger quantities of electricity. This makes it suitable for mobile applications, like cars. 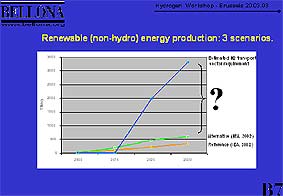 How to produce hydrogen? Bellona wants in principle that hydrogen is produced from clean renewable sources. However, we see that it may occur a time gap between the integration of hydrogen cars, and the development scheme for renewable energy sources.

The chart to the left illustrates what the International Bureau of Energy predicts will be possible to develop of renewable sources in Europe, if the decided intentions are to be carried out (orange line), or discussed intentions are carried out (green line). The blue line illustrates the energy requirements for production of hydrogen if all cars and trucks sold in Europe from 2010 are hydrogen vehicles.
The chart below right shows this in concrete terms. We see that we will need an enormous increase in production and assembling of windmills or solar panels. 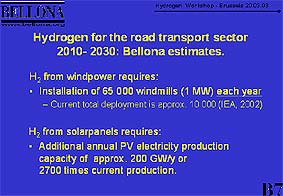 It is not very likely that so many hydrogen cars will be sold so early on. There will, on the other side, exist a large gap between the production of renewable energy, and the energy demanded by road traffic in Europe anyway. The gap widens further due to the fact that that the renewable energy produced will be used in other sectors as well. 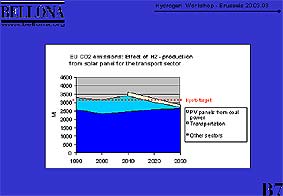 We will emphasise that Bellona strongly urges for both a rapid as possible construction of new renewable sources, and energy efficiency. But we also acknowledge the vast amounts of energy that are to be replaced in the field of transportation in a relatively short period of time.

We also see the necessity of large quantities of energy to construct the equipment necessary for a transition to renewable energy sources. If it is possible to use CO2-storage in connection to this, it will decrease the emissions even further. With a focused commitment Norway can change from exporting fossil energy to exporting products, or parts of products, that will produce enormous amounts of clean and renewable energy. 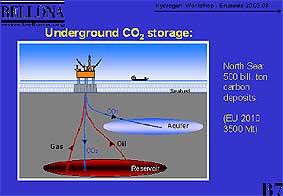 The storage capacity in the North Sea

A suitable place for CO2 storage is the North Sea. Both aquifers and old oil wells (see illustration) are an option, where the CO2 can be stored in a sufficient amount of time. In the North Sea alone, the storage capacity is large enough to store the emissions from all of Europes power plants CO2 production the next couple of hundreds years. 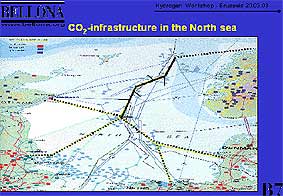 The storage will start with deposits in oil- and gas wells. This because the lucky fact that CO2 pumped into the wells will pressure out more oil, and thereby extend the life span of the oilfields. This has a major economical advantage. It is therefor possible to reduce the costs attached to CO2 handling substantially. This will give the oil companies a possibility to be a part of the solution rather then a part of the problem.

CO2 storage will also reduce some of the outrageous resource waste going on in the North Sea today, when using natural gas as pressure support. CO2 can take over this role, and the natural gas can be sold instead of being pumped into the ground. 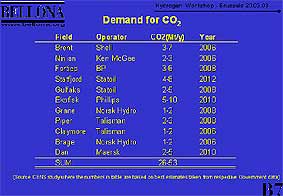 Can relief the pressure on the Barents Sea

The requirement for CO2 in the North Sea in order to extend the life span of the oilfields, are large. Between 26 and 53 million tons are needed in the North Sea every year. The situation for some of the fields is starting to become urgent. Bellona thinks it is better to extend the life span of these oilfields by CO2 -storage, rather then establish new oil production in vulnerable areas like the Barents Sea.

To realise CO2 -storage a network of pipelines from large CO2-produsers, like gas- and coal power plants around the North Sea, are needed. The network will transport CO2 to where the demand is at any given time. After a couple of decades the oil industrys need for CO2 will decrease. By then the necessary infrastructure will be available, and it is possible to store CO2 in aquifers instead. 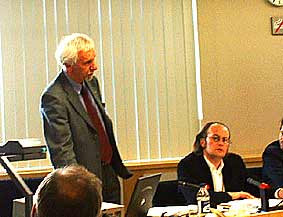 – In the future several roads to the hydrogen society will be presented, Holte closed with. -The mission for us present here, will be to map out the roads that can take us to the wanted destination, and not end in a dead-end street half way there. Holte emphasised the need for co-operation between many sectors in the society in order to reach the goals. Industry, politicians, environmental organisations, scientists and others must join forces in order to find solutions, and to get them through.  This workshop was one step on this path, Holte said shortly after the meeting.  We gave influential people in the EU-system, who normally doesnt meet, an arena.