Transocean, operator of the Deepwater Horizon, hands out giant bonuses to execs for ‘safety’ in spite of Gulf oil blowout

Transocean, the world’s largest offshore oil-drilling firm that ran the Deepwater Horizon and bears part of the responsibility for the oil blowout in the Gulf of Mexico in March of 2010, gave its top executive bonuses in reward for the company’s ”best year” in safety, news agencies have reported.

Published on April 3, 2011 by Charles Digges 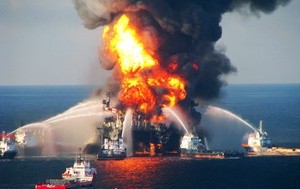 The explosion aboard the Deepwater Horizon rig, leased from Transocean by BP for test drilling, resulted in the death of 11 workers, nine of them from Transocean. In 2009, the company halted executive bonuses – 20 percent of which are based on safe operations – because four workers died.

“This is disgusting,” said Bellona president Frederic Hauge on Sunday.

“We must remember that this was a huge oil spill and that people died. These bonuses reveal that the oil industry is full of bad attitudes towards safety – and these kinds of attitudes increase the risk for more accidents,” he said.

The ensuing oil gusher became the worst ever accidental oil spill in history at 205.8 million US gallons, or 4.9 million barrels – topped only by intentional spills of 220 million US gallons effected by the Iraqi army during the US invasion in 1991.

The Macondo spill continued to leak into the Gulf of Mexico for three months while BP tried and failed several times to cap it, which can partially be blamed on a faulty blowout preventer furnished by Halliburton, but which was not adequately tested by BP workers.

The oil gusher fouled the coastlines of four states, scared tourists away, crippling local economies and closed countless fishing grounds, a staple of the Gulf coast’s food source as well as its job base.

Late last year, the US National Oceanic and Atmospheric Administration claimed the massive amounts of oil had simply disappeared in seawater. But this was shot down by the University of Georgia, whose research revealed that heavy use of the highly toxic oil dispersant Corexit – which has proven deleterious effects on the human respiratory system – had sunk the oil to the sea floor were it lies in some places as much as five meters thick.

The true environmental and economic impact may not be known for years.

Still, Transocean insists there had been a drop in the rate of recorded incidents and also in their potential severity and handed out huge bonuses to its top executives, saying the company had has its best year in safety ever.

In a filing on executive pay, Transocean said, “Notwithstanding the tragic loss of life in the Gulf of Mexico, we achieved an exemplary statistical safety record.” Based on the total rate of incidents and their severity, “we recorded the best year in safety performance in our company’s history,” the Wall Street Journal reported.

A spokesman for Transocean told the paper that, “The statements of fact in the proxy speak for themselves, but they do not and can not adequately convey the extent to which everyone at Transocean is keeping the families of the men who lost their lives at Macondo in their thoughts and prayers as we approach the first anniversary of the incident.”

Mark Lanier, a Houston lawyer who is representing clients who have claims in the spill, expressed his disgust with the bonuses. “Some things are just gross,” he told the paper.

Transocean, meanwhile, continues to maintain that that BP is solely responsible for the oil spill. BP contends that Transocean shares liability.