In New Orleans’ French Quarter, people rely on magic and a little reefer to stop the BP oil geyser

NEW ORLEANS – In this town’s French Quarter neigborhood of black magic, mysterious goings on behind the curtain, and ghost hunting tours, it is not surprising that the Gulf oil spill leaking for the last 19 days 130 miles to its south, after the BP operated Deepwater Horizon rig exploded, would be viewed as a kind of curse or corporate conspiracy by many. 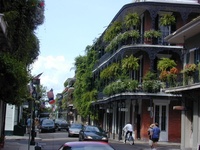 The gamut of blame along its streets of Creole architecture run from the White House to the oil industry and even to the anti-marijuana lobby.

BP on Friday confirmed the mystery of what caused the explosion at the Deepwater Horizon well, which sank it and killed 11 workers: a methane gas bubble rose from the high pressure well 5,000 feet (1,500 meters) below the surface through the drilling column, and breaking though several barriers, ignited.

As of last night, some hope emerged that the some of the oil flow would be staunched as BP engineers using undersea robots had a massive 98-ton metal chamber hovering just above the gushing, ruptured oil well. But the operation at such a depth requires pinpoint accuracy. BP officials hope to attach a pipe to the big metal box to start siphoning oil to a ship next week, BP officials said.

While all of this was going on at sea, New Orleans, where the hot evening air was permeated by the smell of oil, the hard partying jazz bars, tarot card readers and exquisite seafood restaurants kept pace with the joie de vive that has made this neighbourhood famous.

Shrimp and Oysters were still on the menu, and seafood suppliers say the local hot spots won’t start feeling the crunch for at least three weeks, as a special shrimping season that closed last Thursday allowed fishermen to haul up as much as the could before the oil began inching toward the coast.

So, residents – who have braved the hardship of Hurricane Katrina in 2005 – kept marching to the beat of their distinct drummer as the ecological disaster that could have the effect of a major Hurricane crept toward them, like Hurricane Katrina redux, but this time in excruciatingly slow motion.
“Oh please give me two dollar for a joint of marijuana, cause crack cocaine don’t do it anymore,” David ‘trail mix” Packard, a busker and electrician on Royal Street sang in a song he dedicated to the Gulf oil spill.

“This will lead to an ecological chain reaction of unprecedented proportion,” said Packard of the spill. “People don’t realize it yet, but we are going to be feeling the impact of this for years.” 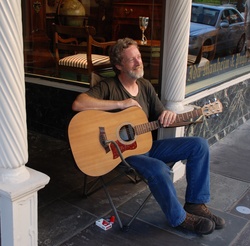 But he leaned in close to quietly mention another crucial element that must be taken into consideration: the Deepwater Horizon rig ignited on April 20, or 4/20 in American notation – 4:20 p.m. being the time of day when die-hard US pot smokers toke up.

“I’m not a paranoid conspiracy theorist, but you got to look at the connection,” he said.

Gina, a palm reader and psychic at Rue Royal Psychics who would not give her last name, said that many of her clientele had discussed the oil spill with her.

“I don’t have people coming in and asking how the oil spill is going to affect their lives or futures, but it has become a part of the spiritual connection that many of my clients share,” she said.

Joey Deloach, surrounding by a candle and bead draped voodoo shrine at a shop on St Peter Street said that practitioners of voodoo would view the spill as a negative event: “The oil is creating an energy that taints nature,” he said. “Nature gives voodoo its strength and source.”

John Richie, a filmmaker in this coastal neighbourhood, contemplated shaving his head and donating his blond locks because he had heard that hair absorbs oil. Bridget Joseph, an energy consultant, was eager to volunteer to clean oil off something, anything — but nothing needed cleaning yet.

Along the Mississippi Gulf coast, which is expected to get hit with oil sheen today or tomorrow, according to the National Oceanographic and Atmospheric Administration (NOAA), volunteers are lining up to clean pristine beaches.

Yet, though Packard has contemplated offering his skills as an electrician, he admitted that many people, including himself, are not going to do much at all.

“There’s an apathy, certainly,” he said. “Besides, people have to work their day jobs and this is a town that lives the present, so it’s not like people are looking far down the road.”

Restaurants serve up their catches unfazed

Restaraunteurs, who had heard the news of shrimp and oysters reeking of oil pulled from the Gulf as early as last week were anxious to put their best feet forward and declare they were still selling the delicacies.

“People here will still eat seafood,” said Trey, a host at the Royal House Oyster Bar, who also asked that his last name be withheld. “That’s what people do in New Orleans. In other words, people want their seafood and to eat it too.”

A waiter and cook at the Green Goddess restaurant on Exchange Alley said he hadn’t noticed any slow down in seafood dishes.

“No one is really asking about whether the fish is clean or avoiding it,” he said. “People have been more supportive than worried – they want fish from the sea,” he said.

How much constant local news reports on how safe the fish is are influencing diners decisions, however, is impossible to measure. WWL TV station of New Orleans has been running the same segment on safe shrimp and oysters for three consecutive days on its morning and evening news programmes.

Stocking up before the drought

But restaurants acknowledge it’s going to be a rough summer.

Several city restaurants have been stocking up. Shrimp sales rose 30 percent in the last three days alone. Also up are sales of deep freezers to store shrimp that came of the special shrimping season that was opened early, after the Deepwater Horizon explosion.

Drago’s Seafood which served 3 million oysters in 2009, is one of these, said its manager Tommy Sonatavich. He said he would only buy out of state “as a last possible resort” because “Louisiana oysters are without a doubt the best, and there isn’t even a close second.” 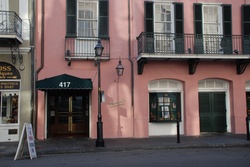 Brennan’s, a New Orleans seafood landmark, however, remained mum. When asked how they planned to fare this summer, Bellona Web was referred to its head chef, who deferred comment to restaurant PR manager Bonney Warren, who, in turn, referred comment back to the chef. No further information from Brennan’s has been forthcoming.

“It’s hard to wrap your head around it,” said Deborah Phelps, the proprietor of Olivier House Hotel as warm, moist air slipped through the open door into the air conditioned marble lobby.

“Does anybody have any idea what’s going to be the ultimate result of this?” she said.

The timing is a devastating blow to the city’s psyche. Since the Saints won the Super Bowl upon the backdrop of Mardi Gras, followed by the landslide election of a popular new mayor, Mitchell J. Landrieu, New Orleans had been, by all accounts, getting its groove back.

Five years down the road from Hurricane Katrina, the tangible signs of a real recovery are everywhere: in rebuilt homes and refurbished parks, in old restaurants come back to life and in new businesses thriving. With hurricane season still weeks away, people were feeling optimistic for the first time in a long time.

“It was a good winter, with the Saints and the rebuilding and the new mayor,” said Phelps. “First time I felt that way since Katrina, for sure.”

But in the special character of the city, that was born with the slave trade and a pastiche of voodoo and other nature based mystical sorcery brought by ships from Africa, residents have an undying confidence that something will save them from the worst.

Earl Weaver, a 16-year-old jazz bass drum player who was wandering with the rest of his band down Toulouse Street after a day of street performing said the “oil spill is a sad, sad event,” adding, “But I am confident our president will get it under control.”

He said his band, The Young Onez Branch Band, had  been out playing Dixieland jazz on the Quarter’s Jackson Square to lift peoples moods. “We don’t know what’s going to happen, but we are doing out best to keep people thinking positive,” he said.

Gina at Rue Royal Psychics also had no prognostications for the future oozing toward the city.