SHIP ISLAND, Mississippi – Tar balls, or condensed balls of crude oil and chemical dispersant, and dead or oil covered animals, have begun to make landfall on this nationally protected nature reserve as a direct result of the BP-operated Deepwater Horizon leak and clean up efforts surrounding it, environmentalists have said.

And one oil rig architect with 25 years of experience in offshore drilling said BP is ignoring the obvious solution for capping the well while it fumbles around with its failing efforts and hides behind rhetoric about how difficult it is to staunch the mile deep flow – a very standard depth for an oil well in any case – as cleanup operations bring in lots of cash.

Enormous quantities of chemical dispersants mixing with oil are causing an admixture as toxic if not more toxic than the oil itself, several leading environmentalists have said, making the clean up effort as threatening to the environment as the spill itself.

Slick still out of sight and mind

But for every one person who rings the alarm bell, there are 10 more willing to say they are utterly unconcerned about the Puerto Rico-sized slick at sea killing wildlife, let alone hitting the coast. After watching dramatic footage of the rig sink in flames into the sea 50 miles south of New Orleans, the enormous quantity of crude, whose smell permeates local air, has only revealed itself to the general public in mysterous messages. 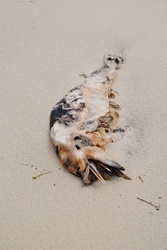 But what is beneath the water is not as calm as it seems on the surface. Scientists today said they were finding enormous oil plumes in the deep waters of the Gulf of Mexico, including one as large as 10 miles long, 3 miles wide and 300 feet thick.

The discovery is fresh evidence that the leak from the broken undersea well could be substantially worse than estimates that the government and BP have given.

“There’s a shocking amount of oil in the deep water, relative to what you see in the surface water,” Samantha Joye, a researcher at the University of Georgia who is involved in one of the first scientific missions to gather details about what is happening in the gulf, told the New York Times. “There’s a tremendous amount of oil in multiple layers, three or four or five layers deep in the water column.”

The plumes are depleting the oxygen dissolved in the Gulf, worrying scientists, who fear that the oxygen level could eventually fall so low as to kill off much of the sea life near the plumes.

Dr. Joye said the oxygen had already dropped 30 percent near some of the plumes in the month that the broken oil well had been flowing.

“If you keep those kinds of rates up, you could draw the oxygen down to very low levels that are dangerous to animals in a couple of months,” she told the paper Saturday. “That is alarming.”

Since Bellona Web’s visit to Ship Island last week, one dead sea turtle and one dead dolphin have washed ashore on the island nature reserve.

Saturday, local and national environmental groups scraped what they said was oil emulsion – a combination of crude and chemicals used to disperse it – coating natural debris and trash that had washed onto the south side of the Island. 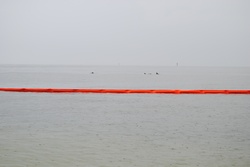 Jared Crisculo, cofounder of the California-based ocean conservation group Below the Surface, who had been on Ship Island since early morning, displayed his shirt covered in oil smelling tar. He had been filling bags of trash coated in sticky dark brown gook.

Crisculo and Andrew Baker of the Lake Pontchartrain Basin Foundation also reported they had seen a bird covered in oil struggling along the shoreline in today’s choppy seas and rain, but that the bird returned to water. Park Service officials were unable to rescue it before it disappeared among the whitecaps on the Ship Island’s south side.

National Park Service Ranger Jody Lyle told Bellona Web that one oil covered gannet had been discovered and rescued on Ship Island earlier Saturday. She also said that, more generally along the gulf coast from the Florida panhandle to Mississippi, 10 oily Pelicans had been found alive over the past several days, and that five had been found dead. Two had been cleaned and treated and released back into the environment.

But Rangers from the National Park Service insisted to Below the Surface, that both the turtle and the dolphin carcasses had washed up on Ship Island more than a week ago.  Reporters from Bellona Web, however, who had visited the exact site where the carcasses now lie last Saturday, contradicted that for Crisculo. 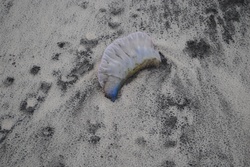 The National Park Service has an agenda of its own – dead animals on protected beaches, and the spill at sea, mean a lean summer. But even larger environmental and scientific institutes on the Gulf coast are reluctant to draw any connection between the Dolphin, bird and turtle deaths and the spill.

Are dispersants killing the animals?

These deaths would not have to result from oil, say many environmental scientists. BP has poured some 400,000 gallons of highly toxic Corexit chemical dispersant on the spill. Though EPA reports on the use of oil dispersants remain inconclusive, especially at depth, BP announced that it will from Saturday forward continue to dump dispersants on the spill 24 hours a day both from boats and planes. 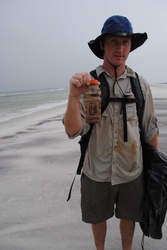 Those who have studied oil spills and cleanup efforts, like Defenders of Wildlife’s oil drilling specialist Richard Charter and Riki Ott, an oil spill expert and author of “Sound Truth and Corporate Myth$: The Legacy of the Exxon Valdez Oil Spill,” say mixing dispersant and oil creates a substance more toxic than the oil itself.

Megan Broadway, a spokeswomn for the Institute for Marine Mammal Studies (IMMS) in Gulfport confirmed MMS has more than 50 dead sea turtles, and at least one dolphin – none of which the institute says were covered in oil. She told Bellona Web it is too early in the investigations of the turtles to trace their deaths to the spill.

In a statement prepared for Bellona Web by IMMS head Dr. Moby Solangi, he wrote that, “Dolphins take in a large amount of air when they surface and then hold their breath for several minutes at a time. This allows the fumes to enter the blood stream and affect internal organs like their brain, liver, kidneys, heart, and lungs. Dolphins can also be exposed to oil through eating prey that have consumed or absorbed the chemicals into their bodies,” he wrote.

“The amount of damage caused is determined by the concentration of chemicals inhaled or ingested and the duration of exposure to the oil. Sea Turtles can also be affected by exposure to oil in similar ways,” wrote Solangi.

But the thorough description of the effects of chemical dispersants did not indicate the chemicals could be lethal – at least in so many words – leaving many other scientists and environmentalists scratching their heads over the mounting body bags.

“At this point I cant say that any turtles have died due to oil from the rig explosion,”Andre Landry, Jr. a turtle expert at Texsas A&M University. “That doesn’t mean they haven’t. And it certainly does not mean that they won’t.”

Sea turtles – particulary the highly endandered Kemp Ridley turtle –  prefer deeper waters than those surrounding Ship Island, where one can wade several hundred feet off the shore line. BP is spraying its dispersants beginning 50 miles off the coast – where they mix with the oil at sea in the turtles’ primary feeding ground. But it is not the oil that would kill them, said Landry, but rather the toxic fumes they would breath when surfances for breath. 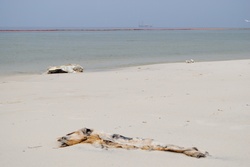 Pass Christian Patrol Officer Gus Holliman, who rides the beaches in search of dead animals, said he sees one dead sea turtle about every six months, victims of fishing nets or natural causes.

“But we’ve never seen this many,” he said, shaking his head.

“Something’s going on; we just don’t know what.”

As Below the Surface’s  co-founder Kristian Gustavson walked down the shoreline, picking up crude caked garbage and examining tar balls, he said, “What a cluster f*ck. I have never seen anything like this, with the officials who are supposed to be helping hiding behind the bureaucracy and gagged.”

Alternatives to Corexit miss the ingredient of industry inbreeding

There are many companies, even one in Gulfport, that produce biodegradable dispersants. Gulfport’s Sludge Solutions International has been providing their dispersants for oil-based spills in the Caribbean for years. But BP will not touch them.

Corexit is manufactured by Nalco of Naperville, Illinois, and its board is packed with several retired BP and Exxon executives. With that in mind, there simply isn’t enough money to be made off of biodegradable solvents that actually devour the oil, a source close to Nalco told Bellona Web. Corexit creates sludge, and hence sweetheart trucking deals to haul it off. Alternatives would also dampen chances for crony deals or kickbacks for use of the dispersant, which BP, and it’s corporate emeritus in Illinois, is essentially selling to itself, said the source.

BP today tried to insert a siphon into the gushing pipe and failed, saying that it try would again overnight after adjustments had been made. Previous efforts included trying to lower a 98-ton metal box with a siphon over the leak, but that failed as well when hydrocarbon ice crystals formed, jamming the bottleneck. Other proposed measures have included a “junk shot” – pumping tires and golf balls and other debris into the 21 inch rupture in the pipe, and dropping yet another, smaller,  metal containment dome over the leak.

“I wonder how interested they really are in stopping the leak?” said the oil rig designer who has worked on offshore rigs for 25 years, and who spoke on the condition of anonymity as he is not allowed to discuss the spill publicly, said.

He said the solution to stopping the flow of oil from the BP pipe was to simply cap it with another blowout preventer. The blowout preventer that was in place was revealed during often acrimonious congressional hearings with oil executives on Tuesday, to have been so deficient that it had a dead battery.

“The bluster about the difficulty of working at a depth of 5,000 feet doesn’t ring true. Five thousand feet has been a standard depth for about 10 years, and even deeper ones are here in the gulf” he said.

As he saw it BP’s efforts were not focused on actually stopping the leak, but trying to still make the well profitable – which can still eventually be done.

“Capping this leak is absolutely the number one priority and they are not focusing on it,” he said. “After the leak is capped, the rest can be dealt with later.”

He also said preparation for the blowout was poor, and recommended that rigs have booms around them. But when push came to shove and then explosion, there was only one fire boom for the some 7,000 rigs in the Gulf, and more had to be ordered. Had these simple items been at hand, the oil could have been contained close to the rig.

“It should immediately have been surrounded by booms,” he said, “Instead, the fire was so hot you could barely get close to it.”

But in the end, he said, BP may reap benefit.

“I not noticed that anyone (at BP) seems worried about clean up because there is money to be made in clean up,” he said.