PASS CHRISTIAN, Mississippi – BP caught its first break Sunday in the effort to stem the oil spill in the Gulf of Mexico, using robots to insert one end of a mile-long tube into a shattered oil pipe on the ocean floor, the goal being to siphon up some of the crude gushing into the Gulf of Mexico.

Yet, the siphon still doesn’t advance the company’s key goal of shutting off the oil by capping the well, rather than merely containing the flow. Even in the best-case scenario, the tube won’t capture all the leaking oil. BP executives said it was still too early to say what percentage of the oil and gas is being captured, indicating earlier in the day that “some” was about as specific as they could get.

But other oil industry experts and the US federal government itself said the siphoning project was off base.

“Stopping the leak is priority number one,” an oil rig designer with two decades’ offshore drilling experience told Bellona Web on the condition of anonymity. “Experimental processes to see how much oil might be recovered from the catastrophe are in very poor taste, and are wasting valuable time,” he said, adding: “We’ve been watchiing chemistry experiments with dispersants at sea, and today we saw a lesson in mediocre plumbing.”

The Secretary of Homeland Security Janet Napolitano and Ken Salizard, Secretary of the Interior agreed, saying in a joint statement released to Bellona Web late Sunday that the latest technique was “not a solution to the problem and it is not yet clear how successful it may be.”

The statement added: “We will not rest until BP permanently seals the well head, the spill is cleaned up, and the communities and natural resources of the Gulf Coast are restored and made whole.”

It was the second strong statement to BP by the government officials on the current crisis. Earlier they sent a letter saying they wanted to be sure BP would honour commitments not to limit costs to a US statutory cap of $75m (£50 million).

“We hope that BP is able to stop the flow of oil from the damaged well as soon as possible to prevent further environmental damage in the Gulf. Congress and the Administration are already investigating the reasons for the catastrophe and the adequacy of the responses so far,” Bellona USA’s  director, Jonathan Temple, said

The US government is under pressure to make changes after this disaster – the public will demand it,” he said.

The US Coast Guard had said weeks ago that the spill was leaking 5,000 barrels of crude a day into the Gulf – a figure that just sort of stuck. New estimates from Purdue University in Indiana on Thursday, and others from Dr. Ian MacDonald of Florida State Univeristy released May 1st, suggest the amount of oil spilling into the Gulf of Mexico is closer to 60,000 to 70,000 barrel of oil a day.

So when do we stop the leak? 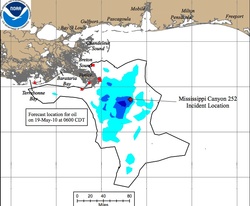 BP says it hopes to implement a plan to shut the well within the next week. A definitive solution, which involves drilling a relief well to intercept the leak, could take another two months.

In a sign of success in containing the flow, BP said it had begun burning off gas emerging from the apparatus at the ocean’s surface. BP executive Kent Wells would not say how much oil was being siphoned but said the process was “working well,” media reports quoted him as saying.

No guarantees from BP on new move

There’s no assurance the risky manoeuvre will pan out. Like BP’s previous efforts to curb the leak, this one has an improvised quality that exposes the difficulties of working at the frontiers of oil production. Earlier attempts, including an attempt to place a large dome over the leaking oil well on the ocean floor, failed.

It is thought that BP’s 6inch wide (15 centimeter) tube and stopper could capture more than three-quarters of the leak. The tool became dislodged from the broken well riser after it was first inserted a mile beneath the surface on Saturday night.

But it was now back in place, Wells said on Sunday. Over the next few days the company planned to slowly increase the amount of oil and gas flowing through the pipe to the tanker, he said.

The current strategy involves snaking a tube snugly into the leaking pipe. The tube is bent at one end like a hook and equipped with thick rubber fins intended to keep oil from leaking out around the edges.

For almost a month, oil and natural gas have been spewing unabated into the Gulf from the ruptured well nearly a mile under the surface of the sea, threatening an environmental catastrophe along the Gulf Coast.

In this latest attempted fix, a pipe leading to the surface is full of nitrogen, which is gradually being bled to allow oil and gas to flow into it. The process must be done slowly to prevent seawater, which can form slushy hydrates, from entering the pipe. If hydrates form, the pipe can become clogged.

BP succeeded on its third attempt to insert a long narrow tube into the leaking pipe, using underwater robots.. Earlier, scientists said they had found vast underwater plumes of oil, one 10 miles (16 kilometres) long and a mile wide.The flow of crude began when the BP-operated Deepwater Horzion exploded on April 20 and sank on April 22, killing 11.

Gulf shore communities are happy some progress has been made. But in places like Pass Christian, Mississippi, Ship Island, a Mississippi barrier Island, and Dauphin Island, Alabama, Bellona Web, environmental organisations, and state environmental authorities continue to see tar balls – admixtures of crude and dispersant – continue to wash ashore with dead wildlife.

These small globules of oil are seen as the possible leading edge of the spill.

More than 50 sea turtles have been collected from the Mississippi coast alone. National Park Service Ranger Jody Lyle told Bellona Web that one oil covered gannet had been discovered and rescued on Ship Island earlier Saturday. She also said that, more generally along the Gulf coast from the Florida panhandle to Mississippi, 10 oily Pelicans had been found alive over the past several days, and that five had been found dead. Two had been cleaned and treated and released back into the environment.

Beaches along the Gulf Coast are also collecting debris washed in from sea that is coated in oil emulsion.

Researchers from the National Institute for Undersea Science and Technology continue to study the impact of the growing spill, including the possible effects of a detected deepwater plume several miles southwest of the spill. But BP would not comment on scientists’ discovery of the vast plumes.

The researchers said they had detected the slicks lurking just beneath the surface of the sea and at depths of 4,000ft (1,200 metres).

Samantha Joye, a marine science professor at the University of Georgia, said in an email interview: “It could take years, possibly decades, for the system to recover from an infusion of this quantity of oil and gas. We’ve never seen anything like this before. It’s impossible to fathom the impact.”

Chemical dispersants BP has been dumping underwater may be preventing the oil from rising to the top of the ocean, the scientists said.