Published on August 2, 2009 by Bellona, translated by Charles Digges 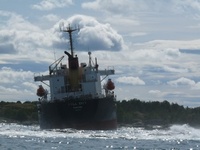 Bellona said Saturday that Fisheries and Coast Affairs Minister Helge Pedersen and Environmental Minister Erik Solheim were present for inspections of damage in the area near where the ship ran aground, some 140 kilometres south of Oslo.

Large portions of the oil has hit beaches along the Telmark coast and near Vestfold, and some 63 dead sea foul had been reportedly found.

Some 16 Chinese sailors had been evacuated by helicopter from the ship while seven others, including the captain, remained aboard, Norwegian media reported.

Pedersen and and Solhiem were in Krongsstranda Saturday, one of the spill’s hardest hit areas.

“I am very glad to hear that the Norwegian Coast Guard believes the situation will return to normal for the areas affected by the oil spill,” said Pedersen.  “I would like to emphasis that there is money to put on this.”

She said she had no reason to be alarmed over the oil spill, and that the government had done its best to assure emergency preparedness in the area. 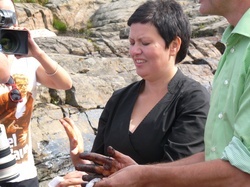 Surprise at Pedersen’s remarks
Bellona oil industry advisor Marius Dalen, who has been in Langesund since Friday when news of the accident spread, was surprised that Pedersen’dared to be so emphatic in her statement.  He said that the accident clearly served as a reminder that there is a need for resources to raise the quality of oil protection as well as to escalate allocations for the establishment of a cargo ship emergency response unit in southern Norway.

“This government has increased spending on oil spills on land, but unfortunately, they have forgotten that there is an urgent need to establish a state-run cargo ship emergency response unit in southern Norway,“ said Dalen.

He said that the Norwegian Coast Guard had in 2006 advised the government to delegate funding for exactly that.

“It is to early to determine if this accident could have been prevented with the help of a better emergency response enterprise, but all experience predicts that there will be more shipping accidents, and that therefore haste must be take to establish adequate preparedness,” said Dalen.

Climate change make preparedness more critical
Environmental Minister Sohleim stated his concern that there are more than 80 nature reserves in the Vestfold and Telmark areas.

The oil slick is moving in against Jomfruland, which is a nature reserve south of Langesund with many seabird habitats. Solhiem also stressed the need for increase preparedness.

“More extreme weather to come with climate change will lead to a need for sharpened readiness (for shipping accidents),” Solheim said.

Bellona is following the situation
The Coast Guard said they would begin discharging the remaining oil on board the boat on Saturday, and Bellona will follow developments.

Bellona’s most important demands to Pedersen and Solheim

* Revision of procedures to intercept a ship that does not respond when it is called by traffic control center.
* Increase appropriations to secure a state-run cargo ship emergency response unit in southern Norway and to strengthen quality demand for oil spill clean up equipment.
Active bans against the use of heavy bunker oil for ships that travel through Norwegian waters.

This article was written by Elisabeth Saether.