Petition against oil terminal will be examined by UN

KALININGRAD – An appeal from the residents of the city of Svetly in the Kalinigrad enclave of Russia against the construction an oil terminal there will be examined by the United Nations Commission on Human Rights before the end of July 2007.

Published on February 21, 2007 by Galina Raguzina 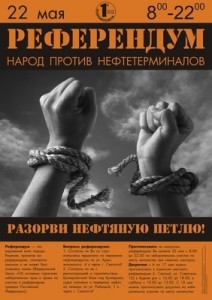 Svetly residents have been engaged in a grueling and unsuccessful battle to gain insight into the project several months, during the course of which numerous appeals and requests for information were presented to 22 government authorities and I the process of which 10 lawsuits were filed in Russian courts – all of which failed.

The case was even put to a referendum in which the majority of the town’s voters who turned spoke out against the terminal, but many of those on local voting registers whose votes were included in the final results were ineligible to vote because they were in jail, changed their registration to other locals, were military personnel registered in other regions or were dead.

Other fraudulent voting practices that were allowed to pass included discounting absentee ballots.

This accrual of apparent official neglect and fraud has led members of the initiative group driving the quest for information to conclude that all means of defending their rights through their own government have been exhausted.

Since 2004, residents of Svetly in the Kaliningrad Region–which is separated from mainland Russia by Latvia, Belarus and Lithuania – have been protesting against Transneft subsidiary JSO BaltNafta’s plans to build a tranfer terminal for petroleum products on the outskirts of the city.

In 2005 Svelty held a referendum on the construction of the terminal – the single referendum concerning an environmental issue that has been held during President Vladimir Putin’s tenure.

UNHRC brought in
At the end of December 2006, the chairman of the initiative group organizing against the terminal, Yulia Rubish, received a letter from the UN Commission on Human Rights.

In the letter, the secretary of the Commission’s working group, Maria Andre Eshazi, wrote that the Svetly group’s appeal had been received and would be reviewed no later than July 24th 2007, in accordance with UN procedure 1503.

Under this procedure, the Commission is authorized to examine “systematic, and sufficiently proved, egregious violations of human rights and basic freedoms committed in any country of the world,” read Eshai’s letter in part.

The appeal, written according to the UN’s Facultative Protocol on civic and political rights, states in part that:
”We are acting under the guidance and agreement 7532 of the residents of Svetly, who support our appeal to the UN Commission on Human Rights and have signed their names at the bottom of our petition. The residents have authorized us to address in this appeal violations of human rights regarding housing, privacy, a healthy environment and a fair judicial hearing by government bodies in Russia.”

In March of 2004, the head of the Svetly Municipal District passed an ordinance allotting land for the construction of the transport terminal on the city’s edge, ignoring provisions of the Russian Federation Land Code, which stipulate that the local population be informed prior to allotment of any land.

Moreover, the terminal, with an processing capacity of 900 thousand tons, will be situated a mere 250 meters from residential housing, despite the fact that the law requires that such sites possess a sanitation protection buffer of 1000 meters.

Referendum against terminal organized
In January of 2005, the initiative group was permitted to prepare a referendum on the construction of an oil transfer terminal in a residential area. In the referendum, which took place on May 22nd 2005, 10,720 people out of 22,105 registered voters took part in the referendum.

“The residents of Svetly are an example to all of us – they were able to organize a referendum,” said former Duma Deputy Sergei Mitrokhin, then-deputy director of the liberal Yabloko political party. Mitrokin called for all the city’s residents to take part in the referendum.

A total of 10,498 people voted against construction of the terminal, whereas only 140 voted for it.

“We consider such an active response from the residents of Svetly to be a significant sign of support for the opponents of the construction of this dangerous oil terminal,” said Andrei Ozharovski, an expert from the Russian environmental group Ecodefence!

But the referendum was voided – Russian law stipulates a 50 percent turn out of registered voters for referendum to be legal. In Svetly’s case, the turnout was 48.5 percent – falling short by a mere 1.5 percent.

Jailed, unregistered and dead turn out for vote
Yet investigations revealed there had been ballot-box chicanery, and the initiative group appealed to the courts to have the referendum against the construction of the oil terminal recognized.

As it turned it out, 370 voters on local registers had lost their voting rights in connection with the fact that they were “deceased, had changed their registration, were currently serving in the army or incarcerated.”

Aside from that, several thousand citizens, registered in the Svetly district, but actually residing in other regions of Russia or abroad – with some serving on high seas in the case of naval recruits – were for all intents and purposes disenfranchised and prevented from participating in the referendum.

The fairest and most humane
On July 12th 2005, the Kaliningrad Regional Department of Government Architectural-Constructional Monitoring (DGAM) gave BaltNaft a permit to build the transfer terminal.

The initiative group of opponents to the terminal’s construction has appealed in court to have BaltNafta’s permit declared illegal, since Article 40 of the Municipal Code of the Kaliningrad Region – which formerly authorized the DGAM to provide permits for construction work involving wiring – was repealed.

The initiative group has been issuing one appeal after another, referring to article 1065 of the Russian Federation Civic Code on “Warning about the possibility of harm” and the Russian Federation Law “On Protection of the Environment” concerning violations of sanitation norms and regulations violated by the construction project.

The initiative group points out that there is a discrepancy between the documents on land use planning for the terminal and the lots designated for emptying tankers carrying petroleum products with the suggested processing capacity.

Initially, it was estimated that the processing capacity would be 300 to 420 thousand tons, and it was precisely at that rate that the project planners, who were aware that the sanitation buffer for such an enterprise should be 500 meters that could be reduced to 250, reached an agreement with Svetly officials. Subsequently, the projected processing capacity of the terminal was increased to 900 tons, while the sanitation protection buffer was left at its original 500 meter distance.

Despite that, on December 20th 2005, the court of the Leningrad Region of Kaliningrad sanctioned the DGAM permit for the construction of the terminal. The initiative group appealed the decision in the Kaliningrad Region Appellate Court, but on April 12th 2006 was informed that their appeal would not be considered.

The same fate befell other appeals and lawsuits initiated by the initiative group, including an attempt to have the court acknowledge as fraudulent both the conclusion of the administrative head of Svetly that site for the terminal corresponded to expert evaluations, as well as the sanitation-epidemiological evaluation that allowed for reducing the sanitation protection zone requirements for BaltNafta from 900 to 500 meters.

Illegal Terminal
In July 2006, thanks to an appeal to Oleg Mitvol, the deputy director of the Federal Environmental Management Monitoring Service (FEMMS), and after a subsequent meeting with him, members of the initiative group were able to receive a document containing a report on BaltNafta’s compliance with environmental management law in connection with its activities in Svetly that was conducted by the Kaliningrad Regional Division of FEMMS. The evaluation revealed that numerous violations of the law were committed during construction of the site.

During the FEMMS commission evaluation, it was established that the intended lot – where the terminal would be built – corresponded to the Kaliningrad Region’s Department of Natural Resources and Environmental Protection standards for the construction of a terminal capable of processing 300 to 420 tons of petroleum a year.

However, documents included in the project plan presented for evaluation at the Federal Agency for Ecological Technological and Atomic Monitoring (Rostekhnadzor) indicate selecting a lot for a processing with a capacity of 900 tons a year – at clear variance with Kaliningrad Region’s Department of Natural Resources and Environmental Protection standards of 300 to 400 tons annually. This stands in violation of Article 35 of Russia’s Federal Law “On Environmental Protection,” Article 105 of the Water Code and Article 31 of the Land Code.

“We passed these documents along to the office of the Attorney General,” said Yulia Rubish, chairman of the initiative group.

“But there they just pretended there were no violations, even though it is written in plain language there that Rosprirodnadzor did not approve the construction of an terminal with such a high processing capacity.”

BaltNaft
In October 2006, JSO “BaltNafta” was registered as a member of Kaliningrad Region’s Special Economic Zone, having announced its investment of 876.5m rubles ($26m) in a petroleum product transfer base in Svetlovo.

The director of the company, Anatoly Parfenyuk, admits that that enterprise has been dealt a substantial financial blow as a result of the delay caused by protests against the terminal’s construction. Nevertheless, he plans to see the terminal go into operation by the end of 2007.

“Every investor counts on favorable developments. In our case, the initial stage of the project’s realization was less than successful,” says Parfenyuk.

“However, I think that the unfavorable developments are already over.”
Nevertheless, according to Anna Begicheva, a member of the initiative group, the construction site of the terminal was deserted and inactive throughout the month of January.

“All the local workers quit because they weren’t getting paid,” said Begichiva.

“Even the migrant workers have left.”