The Supreme Court March 9 rejected a petition asking for a government resolution on construction of a pipeline from East Siberia to the Pacific Ocean to be declared illegal.

Published on March 10, 2006 by Anna Kireeva, translated by Charles Digges 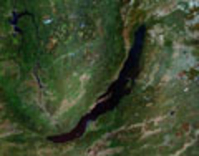 Environmental groups Ecodal and Ecojuris, together with worried residents of Russia’s Far East, asked the court to defend Lake Baikal from plans by Transneft to construct a massive pipeline, including along the shore of the world’s largest freshwater lake. The applicants now have 10 days to appeal the ruling in the Supreme Court’s appeals division.

The applicants were represented in court by Irina Bogdan, chair of Ecodal’s Far East Council, and Ecojuris president Vera Mishchenko.

Pipeline route
The Transneft East Siberia-Pacific Ocean pipeline is projected to carry 80 million tons of oil a year from Taishet in Irkutsk Oblast to Perevoznaya Bay in Primorsk Territory, via Skovordino in Amurskaya Oblast.

One problem that has environmentalists seriously worried is the proposed pipeline route. Several sections of the pipeline, totalling more than 100 kilometres, run close to Lake Baikal, which is a Unesco World Heritage Site.

“Running the pipe 800 metres from Baikal is stupid, to put it mildly,” the Regnum agency quoted Mikhail Kuzmin, president of the Irkutsk scientific centre of the Russian Academy of Sciences, as saying. “More directly, it’s sabotage. If there is an accident oil will spill into the lake.”

The pipeline developers’ own estimates show that a spill of 4,000 tons of crude oil would get into the lake in as little as 20 minutes.

Environmentalists say they are not against the idea of the pipeline per se, but insist that the planned route be reconsidered.

Evgeny Shvarts, head of conservation politics for WWF Russia, said: “The alternative route for the pipeline, through southern parts of Yakutia outside the seismic danger zone and the Baikal basin, has its positive sides.” Shvarts said that this would bring the pipeline closer to oil and gas deposits in the region, and develop the pipeline system to target combined oil and gas exports.

Alternative options are longer, and therefore more expensive. In addition, the Yakutia administration could demand payment for transit across the region, Shvarts said, meaning that “for the company it is much more convenient to deal with regions that don’t put the question in this way”.

Unesco World Heritage Site
The Russian branch of Greenpeace said that in late October an expert commission from Unesco had visited Lake Baikal with the aim of collecting information on the planned pipeline. Officials from the Ministry of Natural Resources told the Unesco group that they would do everything possible to stop construction of the pipe through the World Heritage Site.

Moreover, if Russia does not take definite steps to conserve the lake, Baikal could be removed from the list of World Heritage Sites – an unprecedented step.

Some of their conclusions, signed off on by commission member Gennady Chegasov, were distributed at a press conference the following day. The text reads:

“1. Based on the results of the presented materials, the expert commission, noting the topicality of construction of the East Siberia-Pacific Ocean pipeline system, has concluded that the materials of the [technical and economic assessment submitted by Transneft] do not fully meet legislative and normative requirements of the Russian Federation and regions of the Russian Federation in the area of environmental protection.

“2. Given that the proposed route of the East Siberia-Pacific Ocean pipeline system presents a high potential risk (in the case of accident) of environmental damage to Lake Baikal – a World Heritage Site protected by Russian legislation and the Unesco convention – the expert commission finds unacceptable construction of the East Siberia-Pacific Ocean pipeline system in the section marked in the project, which passes across the Lake Baikal water basin and is characterised by high levels of seismic activity.

“3. Materials of the [technical and economic assessment submitted by Transneft] should be resubmitted with alternative routes for this section of the pipeline outside the Lake Baikal basin.”

Official reaction
Following the negative assessment, the expert commission was increased with another 34 new members. In addition, the state technical oversight agency ordered that four experts who voted against the project be excluded from the state environmental assessment team.

On March 3, the head of the federal environmental, technological and nuclear oversight agency, Konstantin Pulikovsky, signed an order confirming the positive expert assessment. Gennady Chegasov set out his version of events in an interview with the Russian press.

Environmental groups have used all means possible in the fight for Baikal – collecting signatures to send to Prime Minister Mikhail Fradkov and President Vladimir Putin, organising pickets of the pipeline construction, and filing court cases. Now it rests with the Supreme Court appeals division.