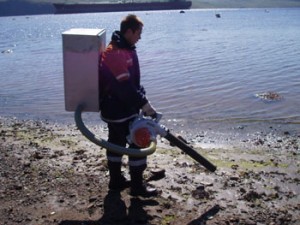 Russia saw many oil spills in 2005. Is the Murmansk region ready?

ASMI acting head Andrei Merenkov told Bellona Web The accident-free year is primarily due to a reduction in trans-shipments of oil through the Kola Gulf, as well as improved professionalism on the part of oil and gas workers as a result of regular training.

Recent incidents in Russia
Overall, however, the situation in Russia does not inspire confidence, with a number of oil-related incidents last autumn in the Pacific Coast city of Vladivostok. At the end of October, 50 tonnes of fuel oil leaked from storage in the Pacific Fleet, leading to pollution of beaches in the city centre. A couple of weeks later, some three tonnes of fuel oil was spilled into the sea from an oil tank at the citys fishing port.

Also in October, a storage reserve at the Rosneft-Arkhangelsky Nefteprodukt facility in the Arkangelsk Region of Northwest Russia exploded, killing a number of workers. Residents of nearby neighbourhoods were evacuated to avoid further casualties.

On November 10th, an oil gusher emanating from 2,400 metres below the earths surface occurred at the Naryanmarneftegaz well at Tavreisky oilfield in the Nenets Autonomous Republic. The gusher reached heights of about 100 metres, and was spread by strong winds across an area of some 7 hectares of tundra. Preliminary estimates put the amount of oil spilled at about 10 tonnes. Official information about what happened was forthcoming only on the evening of the following day.

They try to hide information on oil spills, said Sergei Fyodorov, chairman of the Arkhangelsk Regional Association of Environmental Organizations.

Even the smallest accident cannot be dealt with quickly, since there is no modern equipment to do this, Fyodorov said.

Dealing with spills
Oil spills are classified on a three level scale, of which the lowest is localised (up to 500 tonnes). The Oil Spillage Cleanup Plan (LARN) that all companies involved in the transportation or storage of oil or oil products must possess states that oil companies must deal with the spills independently, or with help from MBASU, if it has a contract with MBASU.

Regional-level spills (500 to 5,000 tonnes on the scale) in Murmansk must be reported to the Emergency Coordination Centre in Murmansk, which notifies all the emergency services about the accidents. After this, the slick is isolated using booms (which localise it and do not allow it to disperse). An emergency situations commission is also formed.

Spillages above 5,000 tonnes are classified as federal level. These are large-scale accidents that involve the efforts of a broad group of emergency services.

Nikolai Bichuk, chairman of the Murmansk Regional Natural Resources and Conservation Committee, told Bellona Web that at present the region is unable to deal with oil accidents involving spills of more than 5,000 tonnes. Bichuk said that major accidents have so far not struck the region, but that at the present time the region does not have the means or the equipment to deal with such quantities of oil products.

All the oil products and oil-and-water mixture cleaned up after an accident are collected either in a tanker or a special facility and subsequently sent for reprocessing. When the oil slick is less than 0.1 millimetre thick, the order is given to stop collecting oil; the remaining oil products are dealt with by absorbents.

In extreme cases  for example, when the slick is heading towards classified facilities  it can be dealt with using dispersants, which break up the slick and do not allow it to spread. However, dispersants have a high environmental cost, and as a result are used only in extreme cases and only with permission from the Regional Natural Resources Committee. MBASU worker Vladimir Parkhmovich said that dispersants have never been used in the Murmansk Region.

Goals also include a standardised Oil Spill Cleanup Plan for the Kola Gulf and a regional plan for the Barents Sea; the creation of a common safety system for delivery, unloading, and transportation of oil; construction of an environmentally safe space for recycling of all types of waste, including dangerous oil-containing waste and the products of accidental oil spills.

The programme promises much, but its implementation seems dubious. One of the co-authors of the Natural Resources Committee plan told Bellona Web that the programme was just a formality. If the programme is being treated as a formality even during the drawing-up process, how can it be possible to speak of environmental protection? The result is likely to be just another document that has no chance of implementation.

It seems unlikely that the driving force behind this formality is a genuine concern for the environment. The impetus could, however, be the 300,000-tonne storage tank that Norway has built in the Kirkenes Bay, 250 kilometres west of Murmansk, which poses serious competition to the Murmansk trans-shipping business. The cost of services at Kirkenes is many times lower, and environmental safety standards much higher than in Russia.

Could it be that the environmental protection programme is being developed to convince companies to use services in Murmansk? These questions are currently unanswered.

Bellona’s working document
At the end of December 2005, Bellona published a working document in Russian called The Oil and Gas Industry in Northern European Russia. According to one of the report’s authors, Nina Lesikhina, we created a kind of informational base for further action.

The document emphasises analysis of possible ways to develop the oil and gas industry in the North European region and the attendant environmental risks that could accompany increased extraction and transport volumes.

We wanted to show that the oil industry is exposing the sensitive ecosystem of the northern regions to danger, Lesikhina said. They do not have the experience or technology needed for drilling, and there is no environmental monitoring system. Our task is to force the environmental services to act more effectively, with due account of regional particularities.

The document will soon be available in English.

Bellona’s Norwegian specialists say that oil extraction should not be allowed at all in the Barents Sea. The region’s ecology has barely been studied  only 10 percent of the sea bed has been researched, and little is known about 135 of the 150 species that live in the Barents Sea. The consequences of any accident are thus unpredictable. Bellona’s many years of work in Norway have forced oil and gas companies and the Norwegian government to take measures to reduce the threat of a negative impact on the sensitive ecosystem of the northern seas during extraction and transportation of oil products.