Talk of Shtokman on everyone’s lips, but little in the way of action

ST. PETERSBURG – Hopes for obtaining some clarity on the situation surrounding the Shtokman Arctic gas condensate field have again been dashed while the project was discussed at the St. Petersburg International Economic Forum, which opened Thursday.

Published on June 22, 2012 by Anna Kireeva, translated by Charles Digges 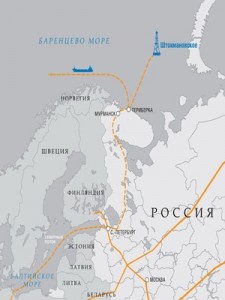 “We will conduct conclusive negotiations with our foreign partners on the Shtokman project at the forum,” Gazprom head Alexei Miller said this week. “According to their conclusions, a new agreement will be prepared which will substitute the current one that has a deadline of July 1.”

The signing of a new investment agreement on Shotkman has been one of the most highly anticipated events of the economic forum. But Gazprom has said that no project documents will be signed within the framework of the forum.

At the beginning of last month, Miller said that the company was engaged in negotiations with a range of companies about their possible inclusion in Shotkman Development AG – though it has cut loose its Swiss partners where Shtokman AG is registered – and has also clarified that Gazprom’s ownership share will not change.

Reports have indicated that decisions on Shtokman, including its participants, could be announced during the St. Petersburg Forum.

During the protracted process of adopting investment decisions in the continental shelf development project, which is estimated to contain some 3.9 trillion cubic meters of gas, reports began to appear in Russian media that France’s Total and Norway’s Statoil – Shtokman AG’s other two partners with Gazprom – may pull out of the project. Both companies are already conducting lucrative projects in Russia.

At first however, Total announced it did not intend to turn its back on Shtokman in favor of its joint project with NOVATEK on the Yamal gas field, estimated as the world’s largest.

And at a May 25 meeting between Statoil head Helge Lund and Russian President Vladimir Putin, it became clear that the Norwegian oil and gas giant – which had at the beginning of the month singed on for cooperation with Rosneft in the Barents and Okhtosk Seas – also would not leave Shtokman.

At the end of May, Gazprom’s Miller said Gazprom was engaged in negotiations with a host of other companies about their possible inclusion in the project. Statoil has suggested that the Anglo-Dutch firm Shell be included. Three sided negotiations may begin as soon as next week.

Statoil made its suggestion in a letter sent to Gazprom, in which it wrote that Statoil itself is prepared to participate in a partnership on the Shtokman project in which the principle foreign partner would be Shell, and further suggested beginning talks.

According to Russian media, this issue was discussed Wednesday at the St. Petersburg economic forum, and the Russian gas giant has agreed to take part in next week’s negotiations, while at the same time taking into consideration the that the dealing on the current agreement is about to expire.

That Royal Dutch Shell’s Chief Executive Peter Voser had a working meeting with Miller during the economic summit speaks in the company’s favor.

Miller and Voser discussed the perspectives for the development of joint operations within the framework of the Protocol on Global Strategic Cooperation. The parties gave high marks to their cooperative efforts on the Sakhalin II project, and also addressed issues of developing cooperation in prospecting, recovering, refining and distributing hydrocarbons on the Russian and international oil and gas market, Russian presss reports indicated.

Cross over to LNG

Earlier Gazprom had suggested 100 percent production of liquefied natural gas (LNG) as the goal for developing the Shtokman field, and Statoil supported that approach.

According to Jan-Helge Skogen, President of Statoil Russia, an LNG production rate of only 50 percent would make the project unprofitable, even with innovations in the current tax regime.  One hundred percent LNG production will make the project economically sustainable. In Skogen’s opinion, the economic effect of implementing the first phase of the Shotkman project will be 0.7 percent.

Envisioned initially under the Shtokman development plan was production of pipeline gas, with a subsequent with a subsequent launch of a liquefied natural gas plant. It was suggested that half of the annual recovered 23.5 billion cubic meters at Shtokman would be transported through the Murmansk – Volkhov to the Nord Stream pipeline for export, as well as to Russian regions. The remaining 7.5 million annual tons would be processed into LNG.

But recently, reports have emerged that the shareholders could adopt a conclusive investment plan that accommodates only the production of  LNG. Alexei Golubnichiy in April said that a final decision on the production of LNG or pipeline gas at Shtokman is planned to be adopted in autumn of this year.

At the ongoing economic forum in St. Petersburg, Christophe de Margerie, total’s chairman of the board is reported as saying almost all the gas recovered from Shtokman will be sent to be processed into LNG.