The issue of giving or denying oil companies access to oil reserves off the coasts of Lofoten and Vesterålen may trigger some of the most heated debates leading up to the parliamentary elections in Norway this autumn. Bellona has long advocated closing off the Lofoten and Vesterålen basins for the oil industry as “long-term oil-free areas.”

Published on August 15, 2009 by Bellona, translated by Maria Kaminskaya

Up until the very day of the parliamentary election, slated for September 14, 2009, Bellona activists will be patrolling the waters of Lofoten and Vesterålen on board of the organisation’s environmental patrol vessel Kallinika.

Environmentalists are worried that in a worst-case scenario, an oil spill near the districts of Lofoten and Vesterålen – should these areas be declared open for oil production – will prove fatal for a whole year’s generation of cod, a concern shared by the Norwegian Marine Research Institute (Havforskningsinstituttet) and Norway’s Fishermen Association (Norges Fiskarlag).

“This case is a fork in the road for Norway,” says Elisabeth Sæther, an expert with Bellona. “Either we go on living off the dirty fossil fuel energy, or we start with the transition to a renewable energy economy and develop both renewable sources of energy and the immense fish resources that we have in the sea.”

The sea areas off Lofoten and Vesterålen are the largest spawning sites for North Atlantic cod. Co-managed by Norway and Russia, the cod population here remains the last sustained population in the world today.

An environmental issue on the political agenda
The issue of oil production off Lofoten and Vesterålen has been receiving concentrated attention since the very start of election campaigns. While two of the most conservative political parties support developing the oil fields in the region, four factions stand against it, including the socialist left and the centrists. The Norwegian Labour Party – the most popular political movement in Norway – is yet to take a definitive stance on the issue.

The outcome of the controversy surrounding oil production off the islands thus remains unclear notwithstanding what results the parliamentary election will bring this year.

The Socialist Left Party, whose representatives have seats in the current government side by side with the Centre Party and the Labour Party, have pinpointed the Lofoten and Vesterålen problem as one of the most important for discussion in the course of the pre-election debates. The party says it will fight hard for victory in this issue if election results show it has won seats in the new government as well. Both core figures in the Social Left – Kristin Halvorsen, party leader and Norway’s minister of finance, and Erik Solheim, the Norwegian minister of environment and development – have been on board with Bellona on the Lofoten issue all summer.

Bellona on the warpath 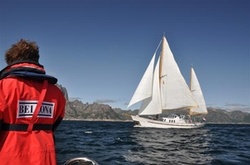 All through the summer Bellona has been in Lofoten and Vesterålen, with activists out at sea on board the organisation’s environmental patrol vessel Kallinika. Here, Bellona has been busy meeting with local fishermen, arranging events in protest of oil drilling in the region, and running courses for members of an ecological Norwegian organisation called “Nature and Youth” (Natur og Ungdom).

“Being here, on site in Lofoten, we learn a lot from the fishermen on what dangers the fishing business may face if oil companies gain access to drilling oil off Lofoten and Vesterålen,” said Sæther. “Besides, it is important to make a presence in the north, to spread information about the problem among local politicians and others who live there.”

At the end of June, Bellona arranged a concert to promote the Lofoten cause in cooperation with an initiative called “Public action for oil-free Lofoten and Vesterålen” (Folkeaksjonen for et oljefritt Lofoten og Vesterålen). This movement was founded last January and has already grown to include 2,000 members and 14 local branches all over the country. The organisation’s members receive no remuneration for their activities as all work is done on a voluntary basis, and only the head of the initiative, Gaute Wahl, receives a fifty-percent wage, working out of the organisation’s headquarters in a Lofoten town of Svolvær.

In an interview aired on the national television channel NRK earlier this year, Wahl said: “These areas are our feeding grounds, and they have been for over a thousand years. To gamble with these eternal treasures just to get a couple of decades’ worth of profit, this we will not have. The oil business will, however.”

With the support of various organisations such as Bellona, Public Action for oil-free Lofoten and Vesterålen has initiated a signature-collecting campaign against drilling in the region. The aim behind the action is to collect as many signatures as possible and deliver them to the new government when it takes power after the parliamentary election in the autumn. During the summer, Bellona has visited music festivals in the north, where activists participated in the signature-collecting initiative.

Solutions are as vital as protests
Pre-election political campaigning is now in full swing and will not be over until the day of the election, September 14. Until then, Bellona will work with the Lofoten cause and will be holding, among other activities, a business seminar in Lofoten aimed to show how seaweed production can be used as a source to generate clean bioenergy. The seminar will be arranged with the help of the Lofoten Chamber of Commerce.

“It is important for Bellona to identify not just problems, but solutions as well. We hope that this seminar will help more local business organisations open their eyes to the development potential available in the commercial application of renewable sources of energy in the region,” said Sæther.

With the support of local fishermen’s unions, Bellona also plans to organise public debates on the issue of oil drilling in Vesterålen, with expected participation of parliament members.

”We hope that we manage to have enough people on board to make this a really important environmental issue for the next government. Working against the oil industry in Norway is a tough job, but we have managed to keep them at bay in Lofoten and Vesterålen so far, so I believe we can win if we continue and hold our ground,” Sæther concluded.