Synthetic fossil fuels: A dieselgate 2.0 in the making?

Audi, the German car manufacturer, is pitching ‘e-fuels’ as a clean alternative to produce petrol, diesel or gas, without having to extract fossil fuels. Sounds splendid but unfortunately too good to be true, warns Jonas Helseth. Jonas Helseth is director of the EU office of the environmental NGO Bellona, which promotes decarbonisation strategies for society.

Published on January 11, 2018 by Bellona Europa 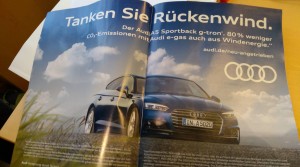 BRUSSELS – Holidays are over for most of us in Brussels, a period traditionally marked by news stories of little consequence. More space left for commercials in the newspapers, perhaps. German policy makers in particular cannot have failed to note the relentless flood of Audi ‘g-tron’ ads filling every screen, football stadium, roadside billboard and indeed the first double page of Der Spiegel’s Christmas edition.

“Tank up on tailwind – 80 % less CO2-emissions with Audi e-gas also from wind energy” reads the latter ad. Sounds splendid, and it fits perfectly in the wider synthetic fuel or ‘e-fuels’ strategy of Audi, which we can read about in their media center. We are told about “petroleum-independent fuels that bind as much CO2 during their production as is emitted when they are combusted. The result is a closed CO2 cycle”. The ‘circular economy’, in other words, has reached Audi’s internal combustion engines.

Just before year’s end, Germans watching ARD’s Tagesschau, the longest established news show in the country, heard how ‘e-fuels’ are a ‘real alternative to electromobility’. Professor of energy storage and systems at OTH Regensburg Michael Sterner educates the viewers on how ‘e-fuels’ are made up of electricity, water and CO2, using electrolysis technology to produce petrol, diesel or gas, without having to extract fossil fuels for the purpose. The process is called Power-to-Liquid/Power-to-Gas. When the Tagesschau-reporter asks the pertinent question of how driving on such fuels can actually be CO2-neutral, professor Sterner insists that the CO2 used for synthetic fuels will be captured from air (or biogenic sources), hence creating a closed CO2 cycle. That same assumption provides the basis for Audi’s 80 % CO2 cut claim.

However, if it’s up to the European Commission and the European Parliament’s Industry, Research and Energy Committee (ITRE), the chance of such CO2 coming from air capture (or sustainable biogenic sources) is nihil.

In July, I explained in Euractiv how the Commission’s proposal for a new EU Renewable Energy Directive fell below any standards for sound policy making in this respect, entirely failing to provide any impact assessment or consult the public before introducing so-called ‘Renewable Fuels of Non-Biological Origin’ (‘ReFuNoBiOs’) into EU fuel mixing targets for renewable fuels, i.e. allowing them to count as decarbonised and renewable. Those ‘ReFuNoBiOs’ are indeed what Audi has dubbed ‘e-fuels’ with a view to present them as an alternative electrification strategy for transport. Critically, there was no requirement from the Commission that the CO2 should be sourced from air or biogenic sources, which could ensure the closed carbon cycle described by professor Sterner.

Given that capture of CO2 from fossil-based industries is up to 100 times(!) cheaper than air capture, the proposed legislation will ensure that CO2 used for Power-to-X will always be fossil.

After having written to the Commission’s Regulatory Scrutiny Board and all relevant Commissioner Cabinets in November, receiving no response from either, Bellona Europa published a policy brief on the Power-to-Liquid trap. While many stakeholders have come to recognise that equating fossil CO2-based fuels to real decarbonisation would amount to greenwashing, few (if any) believe that such fuels would ever attract much investment – notably given the huge inefficiencies and consequent energy waste of their production.

The International Council on Clean Transportation (ICCT), which was instrumental in exposing the #dieselgate emission cheating scandal, published a study in November 2017 showing the vast inefficiencies and costs of synthetic fuels production. Germany’s Süddeutsche Zeitung picked this up in a recent article on 3rd January: not only the direct subsidies for the synthetic fuel production must be taken into account, but also billions of € additional investments in electricity production, adding to already increasing power bills for consumers. Indeed, it would seem counterintuitive that cash-strapped EU governments should consider throwing any taxpayers’ money at this.

But such apparent logic ignores the underlying reasons for the attractiveness of synthetic fossil fuels subsidies, both for industry and certain EU governments

EU energy-intensive industries face growing CO2 liabilities under the EU ETS with investor uncertainties as a result. Given the lack of a framework that enables those industries to truly decarbonise, such uncertainties risk undermining EU competitiveness instead of driving the transition we need.

Meanwhile many EU car producers, notably in Germany, have, until recently, pulled off staggering cheats on both air pollutants and CO2 and are only now starting to face real-life testing. Electromobility is an obvious way forward, but due to long EU inaction in face of said cheats, European carmakers lag far behind their overseas competitors and now hope to buy time. Subsidising the capture of industrial CO2 would effectively remove the CO2 liability from exposed industries, and using that CO2 for producing synthetic fuels while discounting its fossil origin would enable car makers to merchandise such fuels as ‘low-carbon’.

Effectively, fossil CO2 would be moved out of the ETS at large scale, and emitted in a non-ETS sector (transport). The latter sector would claim the fuels to be ‘circular’, ‘renewable’ and ‘low-carbon’ while in reality, they would provide a direct disincentive for climate action in both EU ETS-exposed industry and transport.

The most perverse, yet quite realistic scenario would look something like this: an ageing RWE coal-fired power plant would be paid by synthetic fuel producers for capturing their CO2, removing any ‘polluter pays’ liability and in fact creating an economic incentive for producing it(!); the CO2 is then framed as ‘circular’ and used to produce ‘e-fuels’ for Audi, so that the latter would have to do exactly nothing to improve its engines.

“(…)it is important to promote the use of CO2-neutral substitute fuels by crediting their reductions of greenhouse gas (GHG) emissions to the fleet average for the new cars. When fuels are used whose quantities and sustainable GHG-reductions are demonstrated without doubt, the manufacturer should be given a CO2 credit for the vehicle fleet supplied with these fuels. The proven reduced emission values should be credited directly to the fleet emission value of the new vehicles of that particular manufacturer”.

In other words, once synthetic fuels reach the market, EU carmakers would be required to do less to improve their engines (or produce more electric vehicles!) in order to meet the 95 g CO2/km 2020 EU emissions target.

This is indeed what the Commission has proposed. Without an air capture requirement for the CO2 used, no-one will invest in air capture. This is moreover a direct disincentive for using hydrogen in transport, as hydrogen mixed with fossil CO2 would be equally treated without the need for new infrastructure. The real target of ‘e-fuel’ lobbyists however, isn’t hydrogen but direct electrification, as one can derive from Audi’s marketing: ‘e-fuels’ as an alternative transport electrification route.

Albeit one with 100 % CO2-emissions in the transport sector.

At the so-called German 2017 ‘Diesel-Summit’, transport minister Dobrindt suggested “it is still possible that carbon-neutral synthetic fuels could be as good as battery technology”, apparently without feeling any need to qualify such a statement. This despite the enormous electricity demand such fuels would entail – at least six times that of direct electrification, all the while having zero impact on actual transport sector CO2 emissions. Also in 2017, the EU carmakers’ lobby ACEA noted that while “the costs of such are still high, a ‘second spring’ for combustion engine vehicles is certainly possible”.

During the COP23 UN climate summit in Bonn, it was striking how CO2 Capture and Utilisation (CCU), in particular to produce synthetic fuels, appears to have become many European industries’ key climate strategy. True, some CCU applications may stop CO2 from entering our atmosphere, but not all by far. What happens to their CO2 once it is removed from their sector seems to matter little to some industrialists – out of sight, out of mind?

Yet we must not make industry the enemy. Rather than providing those industries with incentives and a long-term framework to enable provident change, it appears tempting for policy makers to provide short-term patches for a wound that risks festering; a wound leaving a desperate choice for the next decades: supporting a rotting industrial arm that renders EU climate goals unattainable, or amputating the arm entirely to reach those goals. Importing all our goods from elsewhere won’t halt climate change, but it most certainly will bring economic disaster. Let us help European industry truly decarbonise now, so that it may continue to provide welfare for future generations.

The European Parliament’s Environment(ENVI)-Committee voted a requirement for the CO2 in synthetic fuels (ReFuNoBiOs) to be from air capture to be eligible to count toward renewable and decarbonisation targets. The ITRE Committee, as mentioned, did not. The Parliament’s plenary vote on the new EU Renewable Energy Directive is scheduled for mid-January. Should millions of European taxpayers’ money end up being wasted on subsidies for synthetic fossil fuels, industry is hardly to blame. That includes Audi, which is also investing in electromobility, even here in Brussels. Industry needs a framework in which decisions that gain our society yield a fair business case.

The Commission put out this rotten carrot, which already has inspired some quite ‘magical realism’. The EP and Council must now correct that error. Should the EP and Council get this wrong, the ‘g-tron’ precedence could even lead to fossil CO2-based gas burned in homes and power plants being designated as ‘CO2-neutral’ in the future. The decision is now up to EU lawmakers’ conscience.

A shorter version of this article originally appeared in EurActiv on 11 January 2018.