The UK-based energy giant BG Group has tapped Helge Lund, the Norwegian state’s oil and gas giant Statoil’s CEO, as its new chief executive – a post he will take up in March next year, according to releases from both companies.

Published on October 15, 2014 by Charles Digges 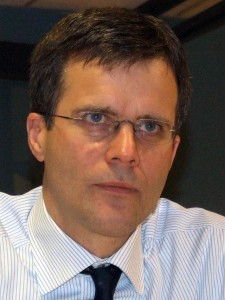 The UK-based energy giant BG Group has tapped Helge Lund, the Norwegian state’s oil and gas giant Statoil’s CEO, as its new chief executive – a post he will take up in March next year, according to releases from both companies.

Lund has headed Statoil, which operates in 36 countries with mixed environmental reviews, for the past decade. Statoil said in a statement that its board had appointed Eldar Sætre as acting president and CEO, effective as of today.

BG Group chairman Andrew Gould trumpeted in his company’s statement that, “Helge’s track record speaks for itself. He has built a world-class exploration and production portfolio at Statoil, and the company is now widely admired for its technical expertise, financial performance and strong, values-based culture.”

Gould, who assumed executive command of BG in April, has made clear that he expects the company – which recently launched a radical job cuts program to trim head office costs – to quicken the pace of asset sales designed to control debts and take on new projects, the Financial Times reported.

Lund, said the paper, is expected to continue this slash and burn policy.

News of Lund’s departure was greeted with shock and surprise by Norwegian media.

Although BG’s annual revenues are around one-fifth of Statoil’s, Lund’s pay package will be nearly six times higher at his new post at BG, and will be accompanied by numerous other million dollar perks.

Nordic hedge fund manager Peter Warren, of Warren Capital, tweeted that given the decline in Statoil’s market capitalization, it “would have been cheaper to have given the CEO a raise,” as quoted by the Financial Times. The big stakes money move is consistent with Statoil policy for the past 10 years, which has sought to maximize profit at the expense of safety, reduce transparency in operations, the nurturing of a culture of greed, and soft pedaling several near environmentally catastrophic incidents, said Bellona President Frederic Hauge.

It’s not about money but ‘energy’

Lund, 52, deflected the idea that he was moving from Norway to the UK for the better salary, saying that after a decade in charge both he and Statoil needed a renewal.

“After 10 years as chief executive of Statoil . . . I wanted to do one more leadership job before becoming a pensioner. I have a lot of energy to give. That is the main reason for the change,” he told a press conference in Oslo, as quoted in the Financial Times.

According to Hauge, the tearful goodbye party being thrown for Lund over at Statoil is a big good riddance from the environmental sector.

“We at Bellona first need to thank Lund for the game,” said Hauge. “We’ve had many disagreements in the past decade – particularly those times Lund tricked us into believing he would actually steer the company in a green direction by focusing on offshore wind energy and Carbon Capture and Storage (CCS) at the Mongstad gas fired plant, and instead steered Statoil into environmentally catastrophic pursuits like shale gas and tar sands hydrocarbon recovery.”

In a double insult to carbon sequestration, after Statoil sunk the Mongstad project in 2013, it was last week revealed that Norway’s state budget included funds to reinvigorate CCS by partnering with the Netherlands’ ROAD CCS project, causing Norway to fall behind on international CO2 emissions cuts promises.

Hauge also cited Statoil’s ballyhooed joint oil exploration deals of the Russian continental shelf – signed in 2012 in the presence of no less a personage than Vladimir Putin – in vulnerable Arctic seas with such world-class polluters as Russia’s state oil company Rosneft. Helge Lund (left) signing off on a Russian shelf joint deal with Rosneft in the presence of Vladimir Putin in 2012 (Photo: Kremlin.ru)

Even though Statoil was forced to withdraw it’s 24 percent stake in Shtokman AG, the Russian gas giant Gazprom-dominated consortium tasked with developing the field, Statoil repeatedly insisted in interviews with Bellona that the icing of the Shtokman project by the Russian side was only a temporary setback, and that Statoil was – even after its write off of about 2 million Norwegian kroner ($336 million) – working with Shtokman AG to develop a profitable strategy to tap the field.

Nothing has been done to reconstitute Shtokman efforts, meaning Lund’s stewardship lost a significant investment to a fantasy.

Hauge also recalls Lund’s laissez faire attitude toward two potentially catastrophic leaks at Statoil’s Gullfaks C gas platform in May 2010 – coinciding with the BP disaster in the Gulf of Mexico. The leaks at Gullfaks C were exacerbated by pressure increases in the annulus outside the well, as well as loss of drilling fluid and gas ingress. Eighty-nine people were evacuated from the platform, constituting the most serious incident on the Norwegian continental shelf in recent memory.

“Bellona is still shocked by the way Lund tried to defuse this event,” said Hauge. “Three years after the incident, Statoil received a NOK 30 million fine, which is the second-largest environmental fine in the history of Norway followed only by [the fine levied for] the Snore A incident” in 2004. In that incident, there was an imminent danger of a gas explosion at sea.

Maintenance and safety cuts to draw blood from stones

These near disasters were made possible by Lund’s policy of cutting costs which created huge maintenance back ups to pile up and inadequate well monitoring to plague the company in order to maintain profitability in marginally producing fields, said Hague.

Lund will also be remembered– perhaps most pointedly – as the man who set Norway’s three northernmost counties on track to investing in Statoil’s corporate funds to build infrastructure for oil and gas.

As oil prices continue to plummet, it’s doubtful that oil and gas recovered in the delicate ecosystems of the North will ever be profitable, turning the entire venture into an embarrassing boondoggle.

Overall, the Lund decade will be remembered as a superficial façade that was more concerned with supporting Lund’s immediate short term reputation with owners and investors than with securing Statoil’s future position, said Hauge.

“We hope Helge Lund’s departure also marks the end of his mindset, said Hauge. “We hope Statoil’s board will now find a successor who thinks in the long-term, with a visionary and a fresh eye, and the ability to lead the company into a new era – into a renewable energy society.”