Former Massachusetts governor Mitt Romney buttressed his lead among Republican hopefuls for the nomination to run against Barack Obama in November’s presidential election, winning five states of the 10 that held republican primaries on Super Tuesday – and, for environmentalists, putting the Republican’s energy policies under a microscope.

Published on March 7, 2012 by Charles Digges 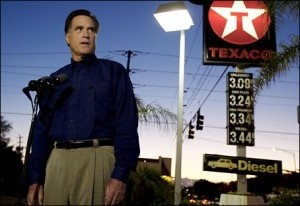 Many of the findings thus far are revealing and equivocal, especially given Romney’s former role in heavily Democratic Massachusetts as a self-described “radical” environmentalist.

While not guaranteeing Romney the Republican nomination for presidency against Obama in November’s elections, his storming of Idaho, Virginia, Vermont, his home state of Massachusetts – and a squeaker victory in Ohio – to snatch 207 of the 419 delegates up for grabs during yesterday’s “Super Tuesday” primaries gave him a comfortable lead among his contenders for eventual nomination.

The performance of Pennsylvania Senator Rick Santorum in Ohio – which Romney wrenched from him in the 11th hour – make Santorum something of a wild card who could make gains in coming primaries.

As Super Tuesday is the day during primary season on which the most states hold preliminary balloting, it is seen as the best indicator of who will capture the Republican nomination in August to challenge Obama for the White House.

‘A President Romney would undo everything’

But the victory, say analysts, is bound to heat up Romney’s energy debate against Obama. Romney supports a heavier reliance on domestically produced oil in the United States and has attacked Obama’s proposed $40 billion cuts in subsidies to the US oil industry over the next 10 years. Romney has also flip-flopped from positions he held earlier and joined the camp, which flies a Republican flag, of those who deny the fact of climate change and who question the US’s contribution to worldwide climate mitigation efforts.

“A President Romney would undo everything Obama has done over the past four years,” said Weiss.

Weiss particularly singled out Obama’s 2009 announcement of new national auto emission standards, bringing federal fuel economy requirements into line with strict emissions limits that California and a dozen other states had been fighting to impose for years under the Bush Administration.

The rules, proposed in the early days of Obama’s tenure, would take effect on cars and trucks manufactured beginning this year, putting in place a federal standard for fuel efficiency of 35.5 miles (57.1 kilometers) per gallon – a standard that is as tough as the one in California – while imposing the first-ever US limits on climate-altering gases from cars and trucks.

Romney has already put Obama’s proposed cuts in oil subsidies to US oil companies – which Obama has called “outrageous giveaways” – in his cross-hairs, and has called Obama on the carpet for his insistence on requiring further studies before the administration puts its support behind the Keystone XL Pipeline project. That project would run a pipeline from Canadian tar sands deposits to refineries in the Gulf of Mexico, meaning additional oil recovery that would imperil the climate.

Romney and others have claimed ending the subsidies will drive up at-the-pump prices for American consumers and kill thousands of jobs. Obama, however, has proposed that the savings of some $4.9 billion a year would be channeled into jobs and installation of renewable, climate-friendly energy.

Cutting subsidies to be a battleground

Obama’s initiative would also mean a major deduction of climate-changing emissions from the world’s second biggest emitter of greenhouse gases.

Fatih Birol, chief economist at the International Energy Agency (IEA) told the Guardian that in 2010, the world spent some $409 billion on fossil fuel consumption subsidies, which artificially lowered the price of coal, gas and oil.

Eliminating those subsidies altogether would reduce fossil fuel use and, by one estimate, lead to half the emissions cuts necessary to avoid 2°C of warming – the threshold set by the United Nations’ Intergovernmental Panel on Climate Change as a point of no return for climate change. By Birol’s count, the paper continued, scrapping all subsidies for fossil fuel use would, by 2035, prevent about 2.56 gigatons in annual carbon dioxide emissions from entering the atmosphere — or about 70 percent of what the European Union currently emits.

“We can help to curb industrial carbon pollution by cutting oil subsidies, which are ‘salt in the wound’ for families who are paying almost $4.00 a gallon for gasoline to fuel their cars. ”

Another cornerstone of a Romney energy policy would be completing the development of the Keystone XL oil pipeline project – a venture that bears wide Republican support. As the pipeline originates in Canada and distributes oil to refineries in the US, Romney and his Republican allies have supported its development as a step against US energy dependence on hostile regimes and toward an agreement with a trusted ally.

The Keystone pipeline originates in the Athabasca Oil Sands (tar sands) in Northern Alberta, Canada, and would carry synthetic crude and bitumen across British Columbia and further to the US, where it would be delivered to refineries in Illinois, the Cushing oil distribution hub in Oklahoma, as well as connections to refineries along Texas’s Gulf Coast.

When the project was met with clamorous environmental protest, Obama delayed further decisions on Keystone until 2013 so that environmental concerns could be further addressed, drawing blistering criticism from oil industry and Republican opponents.

Stumping in Super Tuesday state North Dakota last week, Romney zeroed in on Obama’s stalling of the Keystone project, telling crowds, “When someone says we want to bring in a pipeline that’s going to create tens of thousands of jobs to bring oil in from Canada, how in the world could you say no? This is a president who does not understand energy. [Obama] is the problem; he is not the solution.”

But Dr. Andrew Light, Senior Fellow at the Center for American Progress specializing in international climate and science policy, and a professor at George Mason University, where he is director of the Center for Global Ethics, begged to differ.

The conundrum surrounding the Keystone project is both a climactic and an ethical one, he said in a telephone interview with Bellona Tuesday.

“Bringing oil produced from tar sands to market burns more hydrocarbons, which is the dirtiest oil out there,” said Light.

“America says we will encourage a pipeline through British Columbia, but they should ask themselves a number of questions before doing so.”

Among these are “how complicit” does America want to be in getting tar sands oil to market “given how big a carbon footprint” such a process leaves, said Light.

“The US is already in a precarious position because we cannot commit to any international climate gas reduction programs,” which undermines its credibility in the climate negotiation process, said Light.

Light also said that America should ask if Keystone is the correct approach when the US would only “marginally benefit.”

“Is this a case were we want to encourage Canada to amass more wealth at the expense of the climate?” he said.

Light said that Canada has made “no effort” to compensate the international community for the climate dangers bringing its oil to market has caused – in contrast to oil-rich Norway, which employs domestic climate mitigation technologies and is the biggest per capita contributor to world climate financing.

“If Canada would help in some of the ways that Norway is helping, I would feel better [about Keystone],” said Light.

“But Canada has made no efforts that are comparable to Norway’s.”

Romney’s statements on energy and the kinds of programs he would support are in contradiction of earlier statements he made as Massachusetts’ governor.

Chiefly, he has abandoned his stance that climate change is man-made – falling into line with many of his Republican cohorts.

In recent statements reported by Climate Progress, Romney said, “we don’t know what’s causing climate change on this planet,” explaining that his new energy policy is to “aggressively develop our oil, our gas, our coal.”

Romney had previously enacted in Massachusetts a $15 million green energy trust fund for renewable energy. He also voiced strong support for “investing in cleaning technologies” for an old coal plant in Massachusetts that was responsible for dozens of deaths, saying, “I will not create jobs … that kill people,” Climate Progress reported.

That position could put him on slippery ground with 62 percent of Americans, who a recent and surprising Brookings Institute poll, publicized by the Los Angeles Times, found believed that climate change was man-made.

In April, early in the race to select a Republican presidential contender, Romney told Fox News – a well-known political rostrum in the US for right-wing conservatives – that he supports unlimited coal and oil production and opposes cap-and-trade markets to limit greenhouse gas pollution. Romney calls cap and trade a “radical feel-good” policy that would have “devastating results for people across the planet.”

He told Fox that the nation needed to “start drilling for oil” and to “use our coal resources” because “you have to have oil and gas to power America’s economy.”

These changing positions have left many observers – especially environmentalists – scratching their heads. Some, reported Think Progress, are betting that, if elected, Romney may again reappear as an environmentally conscious leader.

According to Politico, as quoted by Think Progress, Julian Robertson Tiger Management hedge fund, which helped put cap-and-trade legislation on the map with $60 million in contributions over the past decade to the Environmental Defense Fund, has pitched $1.25 million toward Romney’s Restore our Future political action committee, plus the maximum $2,500 to the Romney campaign.

Other environmentally inclined investors, too, say that a Romney presidency would not be a return to the ecological dark ages.

“My feeling is that on these issues that people learn. And my hope is, as time goes on, [Romney] will understand that not everybody agrees on how you deal with these issues, but I hope he will agree with 99 percent of the scientists who believe this is an issue that we have to deal with,” former Governor Thomas Kean, who also wrote Romney a $2,500 check, told Politico.

Svend Soeyland, Bellona’s Senior Advisor on International Energy and Climate, said that was a nice sentiment, but it all depends on who Romney surrounds himself with.

“Perhaps Romney can flip back to a pro-climate agenda, which was a hallmark for his early years as Massachusetts’ governor, however, given the friends and advisors close to him, I am not too optimistic,” said Soeyland.

“One of them will reign in Romney to build the controversial Keystone XL pipeline. On the other hand, there has been a slight [increase in] support [to] accept the [anthropogenic] factor in climate change among Americans. Perhaps the pollsters will take note,” he said.