Published on December 10, 2015 by Charles Digges 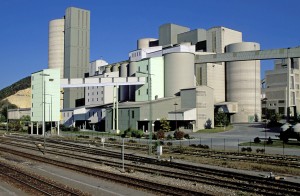 The announcement represents something of a coup in a climate summit that has lacked a focused discussion on de-carbonizing industry, despite warnings from the UN’s Intergovernmental Panel on Climate Change that deploying technologies to achieve this are critical to limiting global warming to 2 degrees Celsius.

“The IPCC has indicated and we believe that keeping down emissions in the future will be far more expensive without carbon capture and storage technologies,” said Bellona President Frederic Hauge. “This makes cement companies real movers in employing capture technologies.”

Cement, as earth’s second most frequently used commodity after water, accounts for 5 to 8 percent of anthropogenic CO2 emitted worldwide, according to various estimates, making the industry a major source of global warming comparable in climactic impact to steel. 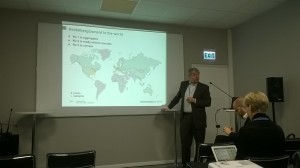 That puts emissions from cement production at 3.9 gigtatons annually, according to International Energy Agency, or IEA, figures.

Rob van der Meer, public affairs director on global environmental sustainability for Germany’s giant Heidelberg Cement, told Bellona that his industry had “no choice” but to use carbon-capture   technology “if the world is to stay within the 2C temperature rise.”

“We have a carbon problem, yes,” van der Meer said in an interview with Bellona at the Le Bourget negotiations center. “There is simply now way to produce cement without carbon release.”

But he said that, according to objectives laid out by the IEA in its Cement Technology Roadmap of 2009, the worldwide cement industry would work to decarbonize its emissions to the tune of 17 million tons per year.

Though the plan envisions such measures on every continent where cement is produced, van der Meer said IEA studies indicate that most of those reductions would first have to occur in Europe.

The conundrum for the industry, he said, is that you can’t simply demand that cement production simply wind down – it’s too necessary for too much.

Indeed, the demand for cement is so pervasive that by 2050, van der Meer said each person on earth would “consume” about 500 kilograms of cement, equivalent to 2 cubic meters of concrete per year. 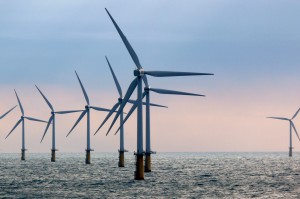 Further, cement and steel alike are crucial for the infrastructure that will support the shift to renewable energies such as solar and wind that the Paris Climate Summit is pushing to power the world by the end of the century.

“Cement is important for building wind farms, especially those that are offshore,” said van der Meer.

It also plays an enormous role in building dams for hydro-electric power.

“There’s a certain buffer of carbon emissions that will always occur with cement production that you can’t go below,” said Keith Whiriskey, Climate Technologies Project Manager for Bellona Europa. “The process for making cement produces a lot of CO2, so the best thing to do is trap it.”

Van der Meer said sticking points to moving the de-carbonization project forward in Europe center around low carbon prices in the European Union’s Emissions Trading System, or EU ETS, and that, by turn, threatens the commercial viability of using pricey carbon capture technology – and van der Meer insists it’s pointless to move on such projects unless there’s a profit to be had.

“The reality is that industry doesn’t invest in something just because it’s an interesting new technology,” he said. “So the EU needs to create the proper business conditions for it.”

For the moment, the real innovations in capturing and trading carbon are happening elsewhere. Jonas Helseth, director of Bellona Europe, said the EU has so far failed at this, and risk losing de-carbonizing technologies to other parts of the world. 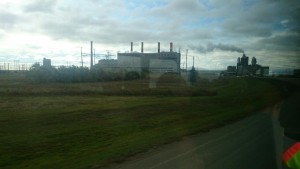 Boundary Dam, the one-year-old carbon capture and storage unit in Saskatchewan, Canada, cost €1 billion, just as a first blush of how costly up front investments in such projects can be. But the price of a second unit slated for construction at the coal-fired power station is estimated to cost at least a third less.

Texas oil drillers have long known the worth of using CO2 for enhanced oil recovery, or EOR, which involves pumping the greenhouse gas at high pressure into nearly depleted oil wells to bring hidden hydrocarbons to the surface.

And China’s pilot carbon trading programs are second only to EU ETS, according to a World Bank analysis. China’s anticipated national market, however, would regulate 40 percent of the country’s economy, surpassing EU ETS and covering 3 to 4 billion tons of CO2 worth up to $65 billion by 2020.

And van der Meer says Heidelburg will be all to happy to operated in that lucrative market.

Hauge pointed out that would be a loss for Europe, but that it would still end up netting the planet 17 million fewer tons of CO2 per year, which jibes with IPCC recommendations to deploy decarbonizing technology. 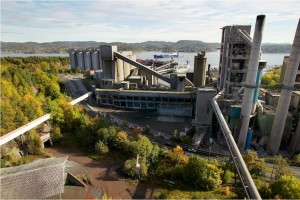 Combining the use of biofuels at the plant with carbon capture is expected to significantly reduce the facility’s CO2 emissions, with the end goal being complete carbon neutrality.

“We have a vision that our product in a life-cycle perspective will be carbon neutral by 2030, and we believe that carbon capture from cement production is an important part of and long step toward achieving this vision,”Gunnar Syvertsen, CEO for Heidelberg Cement Northern Europe said in a 2013 statement.

What’s gotten  stickier here in Paris than the notion of carbon capture is transportation and storage of CO2 after it’s caught.

Whiriskey said geologic storage of CO2 has faced opposition from many environmental groups, and has barely been mentioned in high-level discussions at all.

Van der Meer said Heidelburg will do the catching, but someone else has to keep what they pull down – such as oil companies.

But Whiriskey said this is a natural division of labor: Heidelburg can make the investment to catch the CO2 before it fouls the atmosphere, but the oil industry is the one that possesses the geological know-how to safely store carbon and keep it from seeping back into the atmosphere.

Bellona will therefore continue tracking a course for carbon storage.

“We have to take the IPCC recommendations for CCS seriously,” said Hauge. “We may end up standing alone in this, but we’re not going to back away from a problem just because it’s difficult.”