MURMANSK – A robust group of Russian environmental organizations concluded here on Wednesday that drilling oil in the Arctic is – in the absence of any clear plans for liquidating oil spills and a lack of contemporary technical equipment for doing so – absolutely impermissible.

Published on October 18, 2013 by Anna Kireeva, translated by Charles Digges 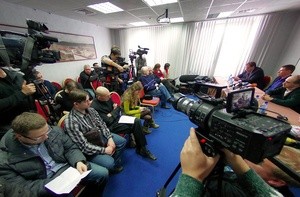 The group statement issued at a press briefing by the World Wildlife Fund, The Kola Center for the Defense of Wildlife, Bellona, and Greenpeace Russia, was aimed at bringing to light the state of affairs surrounding the Prirazlomnaya oil Rig – the world’s first in Arctic waters – and trying to force a dialogue with Gazprom Neft Shelf, the oil wing of Russia’s giant state gas monopoly Gazprom.

Despite the condition of the rig –which is a ramshackle amalgam of second hand Norwegian parts fused with unworkable Russian rigs brought in from the Kara Sea – Gazprom insists it will draw black blood by years end.

The joint press conference took place against a dour background: All 30 activists, journalists and crew members from Greenpeace’s Arctic Sunrise vessel remain in remand jails in the Murmansk region on charges of piracy. The charges stem from a September 18 attempt of two activists from the Arctic Sunrise to scale the trophy Prirazlomnaya oil rig in the Pechora Sea in protest of Arctic drilling. Piracy in Russia is punishable by 15 years in prison and a 500,000 ruble ($15,500) fine.

“In order to understand the situation around the Prirazlomnaya rig, you need to look at the Pechora Sea,” Viktor Petrov, head of the Kola Center for the Defense of Wildlife, said.

The Pechora Sea is a part of the Barents Sea. According to Petrov, the Pechora Sea differs by its comparative shallowness and its size, which is slightly larger than the Murmansk Region.

“There is a more than likely chance of an oil spill resulting from the operation of the Prirazlomnaya platform,” he said. “Even in the event of a medium size spill, oil would coat the entire aquatic area of the Pechora Sea, and in Arctic conditions, oil products will continue to be present for hundreds of years.”

The Arctic ecosystem is extremely vulnerable, and it’s characterized by a very short food chain. Should an oil spill occur, there will not only be problems with liquidating its consequences, but also a dramatic impact on the fishery business in the Barents Sea.

Vadim Krasnopolsky, the WWF’s coordinator for oil and gas sector projects in the Murmansk Region, the “plan of liquidating accidental oil spills” (or LARN in its Russian abbreviation) for the Prirazlomnaya platform is highly idealized, and counts on the rosiest of circumstances.

Numerous experts familiar with the summary of the LARN for the Prirazlomnaya rig, which is available on Gazprom’s website – though many portions of it have been redacted by the energy monopoly – say it is suitable for oil spill liquidation plane for an oil spill in a skating rink, falling well short of application in real conditions of ice, deep freezes, storms, and the long polar night beginning in November, plunging the area into darkness until early January.

“Gazprom Neft Shelf, Prirazlomnaya’s operator, is only saying it is open to dialogue with environmentalists,” Krasnopolsky told reporters.

“ In reality, it aborted a public environmental impact study, will not publicize evaluations of its environmental consequences, or even its LARN plan – the fundamental document from which any conclusions about the degree of consequences of drilling activities and of readiness to respond to spills can be drawn,” he said.

In 2011, when the company cut off its public environmental impact study – a study with is required by Russian law, but for which Gazprom was not punished for scuttling – a coalition of environmental NGOs demanded the company account for the condition of the Prirazlomnaya and gathered several thousand signatures on a petition sent to the government brass insisting on the release of the information.

The action produced absolutely no results.

“I’ll honestly say that I would have joined Greenpeace’s [protest against the Prirazlomnaya] because the situation was dire,” the Kola Center’s Petrov told reporters.

Greenpeace representatives told the press conference that its organization only conducts peaceful, though flamboyant, public protests only when all other avenues have been exhausted.

Mikhail Kreyndlin, Greenpeace Russia’s legal counsel said that, at present, no technology for liquidating oil spills in icy conditions exists. Only Gazprom and Russian state oil giant Rosneft – despite appeals fro specialists, and even the United Nations, not to drill in Arctic waters – are insistently pushing forward with the so-called “necessity” of drilling in Arctic waters without supplying any coherent environmental proof that their operations are at all safe.

“A presumption of ecological safety for any industrial project is present in Russian jurisprudence,” said Kreyndlin. “Companies must prove that their activities will not bring ecological harm.”

Yevgeny Belyakov, Greenpeace Russia’s Arctic programs coordinator, said, “All Arctic countries and all companies undertaking attempts to recover oil in the Arctic announced a temporary moratorium on doing this except for Russia.”

Belyakov said that, “The Prirazlomnaya platform is the single oil platform in the world located in Arctic waters on the continental shelf.”

The environmentalists also explained that they are demanding Gazprom and the Russian administration roll back its plans for oil drilling in the Arctic until an effective spill liquidation program for ice conditions has been developed.