Food security should be no idle food for thought for Russia

DURBAN, South Africa – The implications of climate change for global food security – a threat well appreciated even by those countries where food shortages have not yet become a problem – still remains a blind spot for Russia, an issue that Moscow does not believe is relevant to its foreign or domestic policy goals. Russia is certainly underestimating the risks. 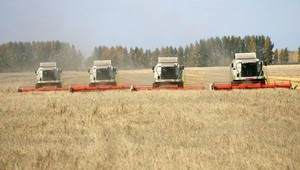 A comprehensive analysis of these data revealed an all too familiar – and now scientifically verified – conclusion: Climate change has a very direct impact on the agriculture and presents one of the gravest risks to countries’ well-being. Notably, the studies treated the agricultural sector both as a source of greenhouse gas emissions and an area capable of posing a threat to the very survival of whole countries (in South Africa, the latter is of especially pressing concern).

Despite the variations in the demographic situation and levels of food supply, the trends were demonstrated to be practically the same for all BRICS countries: The increasingly frequent extreme weather events and changes in precipitation levels and temperature fluctuations lead to poorer harvests and the agriculture sector’s diminishing role in total GDP. These result in devastating economic losses for food producers and a dramatic decline in the country’s overall standard of living.

And even though, compared to India and South Africa, the drop in Russia’s food production statistics is less staggering, the effects of climate change on the country’s agricultural performance can hardly anymore be chalked off to chance occurrences: The crop losses we have earlier seen in Stavropol and Krasnodar Regions, in Russia’s South, are gradually encroaching on the midland areas, endangering the very breadbasket of Russia – the highly fertile black earth lands of the Chernozem Belt.

The banana plantations in the middle of Siberia, promised by some among the Kyoto Protocol detractors, are yet to spring up in Russia’s north – but some of the crops traditionally cultivated in the south are already on the verge of extinction. Moscow doesn’t seem in a particular hurry to handle the growing problem.

According to Roman Romashkin, of Lomonosov Moscow State University’s Faculty of Economics, the most “climate-conscious” policies that are so far implemented in Russia are those initiated regionally. Having come up against real and present problems in their regions, said Romashkin, who participated in the research, local administrations have taken their own initiative to devise adaptation strategies.

Russia needs a viable climate policy backed by prompt and efficient actions – not a handful of stillborn doctrines. The longer Russia’s leaders procrastinate, the bigger the losses for the country. Russia needs to bolster its infrastructure sector – something that it should be doing anyway – modernize its industry, provide support and at least some minimal incentives to Russian producers, and earmark more funding to relevant research.

These steps will ensure stable food supply in a country where import already accounts for nearly 30 percent of the food market. The threshold deemed by experts to be critical for food security must not exceed 25 percent. Within the very short term, measures such as the development of infrastructure industries and state support for food producers would not only stabilize the situation inside Russia, but also open up new export markets.

Climate change means that high harvest areas are irrevocably shifting up north – but Russia has no infrastructure in its northern regions to handle the changing crop yield patterns. As always in Russia, a threat that has always been clear and imminent still catches the country unawares. This time, Russia must try to prepare an adequate national policy to meet the approaching challenge ahead of time.