DURBAN, South Africa – Climate skeptics and the oil and coal industry’s hired PR guns got their comeuppance in a well-known environmental film screened at one of Bellona’s COP17 side events last Thursday.

Published on December 4, 2011 by Magnus Borgen, translated by Charles Digges 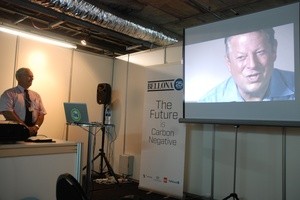 Larry Schweiger, president of the National Wildlife Federation (NWF), one of the United States’ largest environmental organizations, was in Bellona’s conference room in Durban to give a screening of former US Vice President and Nobel Laureate Al Gore’s sobering slide-based film “24 Hours of Reality,” which has been seen by more than 10 million people worldwide since its premiere in North America on September 14 this year.

Schweiger – whose NWF boasts a membership of 4 million and which wields considerable influence over American environmental policy – opened his remarks by saying that he appreciated his close cooperation with Bellona.

The relationship between the organizations has been especially close since Bellona made a special trip to witness first-hand the consequences of the Deepwater Horizon disaster in the Gulf of Mexico in 2010. Bellona provided extensive live coverage of that unprecedented oil spill from the site of the disaster. 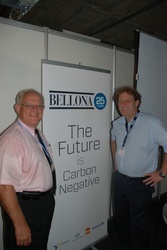 During the Bellona event, entitled “Remove the Doubt, Reveal the Deniers,” Schweiger took the audience on a harrowing tour of the devastating effects of anthropogenic climate change.

Schweiger played commentator to Gore’s film during the Bellona presentation. Gore himself spoke in the film about how future generations will one day look at the current one and challenge us with the question: “What were you thinking at that point in time? Did you really think that all climate scientists were wrong?”

Both Gore and Schweiger said that the grassroots movement supporting the environmental and climate causes is rapidly growing.

“Just think of what can be changed in one day,*” said Schweiger as pictures of great political moments – such as the fall of the Berlin Wall in 1989, and this year’s “Arab spring” uprisings in Tunisia and Egypt – rolled across the screen. Schweiger’s pictures then brought to the screen sights of environmental catastrophes that can happen in just one day: Streets turned to rivers; mountain landslides; rainforests razed and burned.

“Climate skeptics claim many natural disasters we are seeing are normal, but there is nothing at all normal in the natural events we have seen recently,” continued Schweiger as snapshots and film footage reeled in the background.

One of the strongest story lines was tremendous rains in Colombia, where some areas were inundated by over five times as much precipitation as the historical norm; a storm had forced two million people to flee from their homes.

Another strong example was from Brazil, where 274,000 had to leave their homes after especially severe flooding in May 2009, prompting the country’s former President Lula da Silva to say, according to this BBC story: “Brazil is feeling climate changes that are happening in the world, when there is severe drought in areas that don’t have drought, when it rains too much in places where it doesn’t rain.”

Schweiger was clearly keen in his remarks to give a good dressing-down to climate skeptics, and dismiss some of the rhetoric his organization encounters.

“Some the most ridiculous arguments I encounter in the US come from people who claim that volcanoes pollute as much as humans,” said Schweiger.

“The research here is very clear. Volcanoes emit 0.15 to 0.26 gigatons of CO2 per year, while the [corresponding] figure for [man-made emissions] is 35 gigatons per year.”

He also pointed out that all 50 US states either set or exceed their heat records this past July. Two hundred US cities underwent, in the summer of 2011, record-breaking heat waves, and 6,000 record temperature hikes have been registered in daily temperature readings across different U.S. cities this year alone.

This and other phenomena, recorded everywhere around the globe, is what prompts people like Schweiger to insist the time for change is now.

The fossil fuel industry also got its ears boxed by the charismatic Al Gore when he said in the film: “Fossil fuel interests have money, influence and control. But together we have something they don’t: Reality.”

“The documentation and images presented are overwhelming. We at Bellona are proud to work so closely with Larry Schweiger, and have such a good transatlantic partnership with such a large and influential US organisation as the National Wildlife Federation,” said Søyland.

*Translators’ note: Original English-language quotes that appeared in the Norwegian version of this report were back-translated for the purposes of this translation. These back-translated quotes therefore may not be word-for-word renderings of the quotes recorded originally.