MOSCOW – Something has broken down in the government system. Bureaucrats themselves seem to be admitting their own environmental crimes. How else can one explain the recent appearance on the Russian Natural Resources Ministry’s web site of a list of sites under construction for the 2014 Sochi Olympics that are undergoing environmental evaluation? “Under construction” are the key words here, because environmental impact evaluation is a procedure meant for planned economic activities – not wetlands already buried in oblivion by bulldozers, with foundation piles sticking out of them…

Published on March 8, 2011 by Bellona, translated by Charles Digges 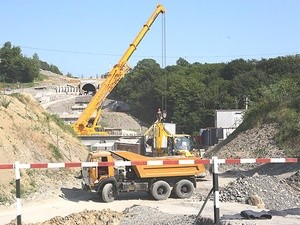 The stadium and the swamp

Yet the Russian Natural Resources Ministry, Rosprirodnadzor, should be given its due – compared to other federal bureaucracies, this structure works largely transparently. Because oddities occur that in another country would be at a minimum cause for prosecutorial intervention, where in our country they remain merely misunderstandings. Recently one of these misunderstandings occurred: There appeared on the web site of Rosprirodnadzor a list of Olympic sites undergoing environmental evaluation in Sochi.

None of this would mean anything, where it not for the fact nearly half the construction and communications from this list have been going on for more than a year – with colossal damage to the environment.

As such, at the end of January, the state corporation Olympstroi ceremoniously reported that, “more than half the foundation for the central stadium is complete,” and only one construction piling required “more than 56 cubic metres of steel reinforced concrete.”

Olympstroi plans to complete the concretization of the foundation slabs before the end of the first quarter of this year , and the building the above-ground construction of the stadium is planned to be finished in October.

The Central Stadium is the most important sports structure of the Olympics. It will host the opening and closing ceremonies, and the bulk of competitions in ‘indoor’ sports. When Sochi was still only a candidate to host the Games, it was planned to build a “100,000-strong” stadium, which would exceed the capacity of the main stadium for the 2010 Vancouver Olympic games by two times.

However, in 2009, during the economic crisis, the Sochi Stadium lost a lot of weight, down to a realistic capacity of 40,000 spectators. The most important Olympic structure has been situated in the center of the Imeretinsk Lowlands – a bog-like area in the Adler region of Sochi near the border of the republic of Abkhazia. When in 1911 the Tsar’s government founded the area as a nature preserve, it did not suspect that century later the unique Armenian bogs would be interred under a two-metre layer of gravel.

Meanwhile, the nightmare came true. In 2009, barbed wire fence was put up around the lion’s share of the Imeretinsk Lowlands in order to teach locals, journalists, and especially curious “greens” from sticking their nose into what was going on. Behind the fence stretched a procession of dump-trucks loaded with gravel that was taken from a place not far

Away – the Mzymta River, which was mutilated along the way. They not only hid the swamp beneath the gravel (according to official data, 4.5 million cubic metres of stones), but several dozen species of endemic plants and examples of Mediterranean flora as well.

The pouring of the foundation for the Central Stadium also began in 2009. The pilings were driven right into the water, fixture welders at times working on their knees in black sludge.

For two years the main Olympic Stadium was being built without a state environmental impact assessment, in essence, illegally, which the web site of Rosprirodnadzor unwillingly had to admit. The site further reports that the deadline for completing the environmental impact assessment is March 2011. This, by the way, is the second assessment for the stadium project: The first, according to the list, “was completed without results”

Whatever the new environmental impact study turns up is no longer very important. Construction will all the same not be stopped, and the recommendations of the experts left unfulfilled. And the real harm that has already been inflicted on the environment cannot even be quantified by the gods of Olympus.

Two years on the areana

The fate of the “big brother” is repeated point for point by another Olympic structure – the 3,000-seat curling arena – that is also jailed away behind the barbed wire fence at from Imeretinsk Lowlands. Although Olympstroi promises that the arena is temporary, and that after the Games its prefabricated construction will be demonstrated, this in no way frees it from a state environmental impact assessment.

And there have been clear problems with it. Rozprirodnadzor reports that a positive state environmental impact assessment for the curling arena will be available only in January 28, 2011, although construction on it began in 2009.

A national park versus snowboarding park

The situation with the “mountain clusters” of Olympic facilities, however, is even worse than that with the seaside ones. All sports construction and accompanying infrastructure in the region of Krasnaya Polyana village falls directly on the border of the Sochi national park. In order to make it easier to build on the parks territory, the park in 2006 fundamentally redrew its maps, turning nature preserves into “recreation zones.” Even such radical measures did not assist in legalizing the majority of construction. After the new year’s holiday, Olympstroi announced the completion of construction and installation works at the Laura electrical substation. This substation,  which was under construction for two years, is intended do supply electricity to the Olympic Village and the ski slopes. Now it is coming to light that it was built illegally: a positive decision on its construction was not received until the middle of last month.

To continue the joke, the construction of the snowboard park and ski slopes with space for 18,000 spectators was turned into the Rosa-Khytor, a resort owned by oligarch banker Vladimir Potanin. Rosprirodnadzor reports that both facilities received positive go-aheads on their environmental impact assessments on February 5. But, as far as is known, the spring European Cup ski competitions are to take place here in the spring. That is, the conclusions of the environmental impact assessment barley squeaked through by the beginning of the event. The complex for cross country skiing and the biathlon  in the Psekhako Range, famous for its unique beech tree forests is also being built without an environmental impact assessment. Thanks go to Gazprom, Russia’s natural gas giant, which is all but the single “private investor” in the Sochi Olympics.

Two illegal activities for the price of one

A long time ago, environmental organisations raised a ruckus abou the joint construction of the “combined roads” of Alder-Krasnaya Polyana that unite the mountain and seafront clusters of Olympic facilities. This is the most expensive construction project associated with the Sochi Games, on which it is predicted some $8 billon will be tapped, and which began in 2009 without not only an environmental impact assessment but without even one document of permission. At the beginning, the firm contracted to buld the road, OAO RZhD, didn’t even have confirmation of the road project. The engineering schematics and the environmental impact assessment appeared only at the end of 2009. But since then, the project has suffered serious changes. By law, after engineering documents that were earlier given approval are changed, the environmental impact assessment loses validity because the construction, as earlier, is being conducted outside legal guidelines.

In a perfect world, a new environmental impact assessment would be done. But would it make any sense? The conjunction of the two projects has already caused catastrophic damage to the Sochi national park. Dozens of hectares plants listed in Russia’s “Red Book” of environmental endangered species have fallen under the ax, like the wig nut and boxwood, which can’t be restored with the stroke of a pen.

Because of this in today’s Sochi, one can count on one’s fingers the number of Olympic costructions that don’t have some problem with the law. And you definitely will not find a single facility that did not have such problems earlier.

Constructing the Olympics along plans that have not passed through an environmental impact assessment, even those with no project plans at all, is a usual, one could say, routine practice in the Olympics’ 2014 capital. In circumstances of a complete lack of control by the state over what is happening behind the barbed wire, the single realistic possibility to influence decisions concerning the environmental aspects of the construction are in the hands of the public – the residents of Sochi, representatives of the scientific sphere and civil society organisations. But as it turns this “inconvenient” situation with the public can be easily circumvented: It is sufficient simply not to bother with public hearings and environmental assessments. Moreover, no one is punishing anyone for this. Neither the environmental defence bureaucracy nor the prosecutor’s office have lifted a finger to stop a single illegal construction development over the entire four years that Sochi has been preparing for the Olympics.

The 2014 Olympics will leave an odour in the country’s nostrils for many years to come. The most important thing it has demonstrated so far is that under the aegis of any “needed” project, you can rewrite any law – or simply close your eyes to their lack of enforcement.

It remains only to wait while the political circumstances of the country remains unchanged and it is impossible to objectively investigate the implementation of such “mega-projects.” The work of investigators will require years to carry out.