CANCUN, Mexico – Spurred by early efforts of negotiators at the Cancun climate summit to reign in emissions of less contentious greenhouse gasses than carbon dioxide, Bellona’s St. Petersburg office will be holding a workshop in the negotiations centre on the effects of black carbon in the Arctic climate.

Published on December 1, 2010 by Charles Digges 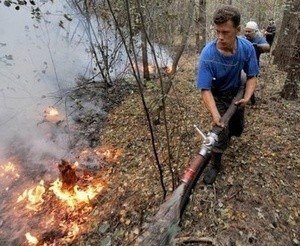 The efforts to reel in and attempt to put international limits on other principle greenhouse gasses and hydrofluorocarbons (HFCs), which were forwarded by North American delegations, and have so far received wide support with few dissenters, and breathed some hope early this week into the Cancun negotiations, which have been a subject of very low international expectations.

What is appealing to delegates in Cancun is that attacking some of these lesser greenhouse gasses is something that can be implemented almost immediately.

The Bellona workshop, which will be held on Wednesday, December 8 at 13:00-15;00 in the Bellona Room in the Tequila Building in the Moon Palace Hotel on the first floor, is entitled “Hope for the Near-term Climate:  Potential of Black Carbon Mitigation in the Himalayas and Arctic,” and will spotlight the work of the Bellona project.

The workshop will include V. Ram Ramanathan, Chair, UNEP Integrated Assessment and UC-San Diego, Nithya Ramanathan, Surya Project, and Yelena Kobets of the Environmental Rights Centre (ERC) Bellona. The moderator will be Achim Steiner, with UNEP.

The aim of the project, said Bellona’s Kobets, was to draw the attention of scientists, the Russian public and Russian officialdom to the effects short-lived factors such as black carbon, methane and tropospheric ozone, which, in the opinion of may scientists, are accelerating the warming of the Arctic climate.

The project focused special attention on black carbon, which forms as a result of incomplete burning of biomass. Large quantities of black carbon accrue because of forest fires and the burning of organic  agricultural refuse. These emissions are carried but air currents and are spread over large areas, particularly the Arctic, where they are deposited on the snow and ice cover. This effect causes rapid melting of the icecap, especially in spring. Russia bears the largest burden for these black carbon emissions because of its geographical proximity to the Arctic.

Before ERC Bellona launched its Arctic black carbon project, a small number of Russian institutes were studying this problem, but only tangentially and within the framework of other projects. So there was no inventorying of what braches of industry were responsible for black carbon, and there was no consolidation of date.

This is an oversight to say the least, given that Russia is a member of the Arctic Council, where the problem of black carbon was one of the most critical issues under international discussion in 2009. Russian experts and official representatives didn’t even take part in preparing the Arctic Council’s working report.

It is precisely these reports that must be a subject of negotiations at various levels. Essentially, said Kobets, the forging of any international agreement on black carbon emissions without the participation of Russia would be entirely ineffective. The international community is therefore interested in drawing Russia into black carbon abatement discussions.

During its Arctic black carbon project,  Bellona has succeeded in changing Russia’s attitude toward the problem, said Kobets. In order to facilitate an exchange of experience between Russian and international specialist, Bellona, with the ICCI and CATF held an international conference entitled “International Meeting on Open Burning and the Arctic: Causes, Impacts, and Mitigation Approaches” which was held in St. Petetsburg on November 8 and 9 and more than 80 scientists, farmers, specialists from forestry services and Russian, American and Canadian officials attended.

Bellona viewed the conference as an important first step in opening further international cooperation. Dealing with the problem of fires – which hit Russia so hard during this past summer’s wave at enormous detriment to the environment – is important, as monitoring the outbreak of fires can significantly decrease the amount of black carbon released into the atmosphere.

“Fortifying forestry defence, creating a structure to monitor fire outbreaks, and taking under control agricultural and grasslands first does not require multimillion dollar investments,” said Kobets.  “In the near term perspective, these efforts can significantly improve the quality of the air we breath and have a positive influence against climate change.”

Results of the “Fires in open expanses and the Arctic” conference will soon be viewable here.

For more information on the Bellona Workshop in Cancun, contact Yelena Kobets at ekobets@bellona.ru or +7.921.902.0853.