Data shows that Russia is warming faster than other countries: Report

MURMANSK – While climate change research around the world is on an upswing, Russia’s contributions to the effort are practically non-existent – accept for waggish studies in the ways by which global warming would economically benefit the country without taking into account the catastrophe that lies behind this train of thought. 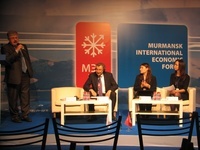 Some in Russia have advanced glowing scenarios that global warming would lead to arable land for agriculture in the vast frosts of Siberia. Others tout the melting of Arctic ice as a means to increase Russia’s maritime activities by opening ports along the country’s northern coast that spend more than half the year frozen in ice pack.

The loss of ice in the Arctic region would also make for easier drilling in Russia’s prize Shtokman Project off Russia’s Arctic coast. The Shtokman field, which Russia views as its primary cash cow, is thought to hold more than 30 trillion cubic metres of gas condensate.

Such is the fervour over Shtokman in Moscow that the Russians have placed a Russian flag on the North Pole – at the bottom of the ocean – in a move that has prompted other countries bordering on the Artic Sea, from Denmark, to Canada to he United States to challenge Russia’s claim. Canada has even bolstered its military presence at the pole in an effort to stave off underwater land-grabs.

Though Russia floated a climate doctrine in May, the document makes no commitments to emissions cuts, but rather outlines preparations the world’s largest country by land mass will take to ride out the coming turbulence.

The lack of making any promises towards concrete emissions cuts could be a hindrance in Copenhagen, when world leaders meet to hash out a new climate agreement to replace the Kyoto protocol. The European Union, which wants to commit to emissions reductions of up to 30 to 50 percent below 1990 levels by 2030, has scoffed at US, Japanese and Chinese commitments of 17 percent cuts below 2005 levels in the same time frame.

Though Russia ratified the original Kyoto Protocol, Moscow signed on basically to sell off emissions quotas as its own 1990 emissions levels were low due to the collapse of the Soviet Union and national industrial failure.

Now, however, as Russian industrial growth has seen an  upswing, Moscow has yet to advance any figures for emissions cuts at all, as noted in a recent article in Foreign Affairs magazine, citing –  much like the former administration of George Bush – that signing up to reduce greenhouse gases will stymie its economic development.

Experts at last week’s economic forum in Murmansk said that over the past century the average global temperature has risen 0.74 degrees Celsius – and a rise of two degrees will have irreversible detrimental effects, according to the Intergovernmental Panel on Climate Change (IPCC).

According to data supplies by the Russian Regional Ecological Centre (RRETs in its Russian abbreviation), the feared warming is taking place more rapidly than the world average. These findings were presented at Murmansk’s Economic Forum, which wrapped up last week.

According to RRETs, the average annual temperature in Russsia rose by 1.29 degrees Celcius – far higher than the world average – between the years 1907 and 2006.

“This means that a temperature rise at current rate means that Russia will by mid century become warmer by almost 2 degrees Celcius in comparison with the last century,” said the RRETs report.

Arctic Climate Change
Climate change is especially discernible in the Arctic. Some 70 percent of the world’s population of the Arctic region lives in Russia, and this means Russia’s Arctic region is home to a large infrastructure, which entails a large use of resources for domestic purposes.

In other words, the temperature in Russia’s Arctic region has risen more than 2 degrees Celsius over the last 30 years.

In addition, the level of Arctic seas have rised by 10 to 20 centimetres in the last 30 years, and permafrost cover  – which holds in CO2, the principle greenhouse gas – has shrunk by 10 percent in the same timeframe. Ocean ice has also reduced over the last three decades by 15 to 20 percent. From 1956 to 1990, the level of surface seasonal ice melt has gone up by an average of 20 centimetres.

The path to solving the problem
Specialists at the economic forum outlined two possible ways to solve this creeping catastrophe – taking up arms to ameliorate climate change like many other countries in the world, or brace via adaptation for its impact. In order to reduce the impact of climate change, climate gas reductions, the development of a low carbon economy and the development of renewable energy and  the adoption of energy efficiency technologies are necessary.

The development of the Shtokman oil and gas condensate field off the northern coast of the Kola Peninsula, where Murmansk is located, will involve an enormous amount of CO2 being poured into the atmosphere. But for now, no one can pinpoint the volume of greenhouse gasses that will be released by the project.

“The problem is that the Murmansk region does not have quality surveys of greenhouse gasses,” RRETs expert Yulia Dobrolyubova told Bellona Web in reference to climate change and the Kyoto Protocol.

“At the same time, work on this has been done in the majority of Russia’s Regions,” she said. The Arkangelsk region, for instance, has such an inventory of greenhouse gas emissions.

However, in response to a question from Bellona Web, Murmansk Regional Governor Dmitry Dmitiyenko was unable to say anything about the future of the regions programme for the development of renewable energy.

This renewable energy project was two years in the making and involved the participation of a special working group of experts that included members of the Murmansk Regional Administration, as well as environmentalists and scientists.

Some 800,000 roubles (some $27,000) was earmarked in the regional budget for the development of this project. Six months ago, however, the programme was sent to the local administration for review, and it is unclear at this point where this review stands or whether it will be approved or sent back for amendments.