Leading Russian human rights lawyer Karina Moskalenko, whose clients have included scathing Kremlin opponents such as crusading journalist Anna Politkovskaya, and oil Tycoon Mikhail Khodorkovsky, told Russian radio Tuesday that she had found poisonous mercury in her car in France in an incident she characterised as a sinister warning.

Published on October 14, 2008 by Charles Digges 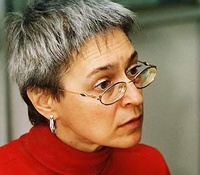 Her alleged poisoning is emblematic of a rash of poisoning in the past several years that have silenced critics of the government.

Moskalenko told Moscow’s Ekho Moskvy radio station the incident had prevented her from travelling to Moscow to take part in the trial of three suspected accomplices in the 2006 murder of Politkovskaya, one of Russia’s most vociferous critics of the Kremlin’s genocidal policies in the break-away region of Chechnya.

French police have opened a criminal investigation into the incident, RIA Novosti, and Moskalenko, 54, told Ekho Mosky that they had discovered huge amounts of a substance similar to mercury in her car.

A high level of exposure in metallic form — most commonly by breathing in its vapour – can lead to death, said Mansour.

"People do not put mercury in your car to improve your health," Moskalenko, who spends much of her time in the French city of Strasbourg – where the European Court of Human Rights is located –  told the radio station. "I am very concerned because there were children in that car."

Moskalenko has a home in Strasbourg that she shares with her husband and three children.

In another interview with the Russian news website Gazeta.ru, Moskalenko reported that some days prior to the discovery of the mercury in her car, she had begun to feel under the weather.

“A cough came on and everything began to swell,” Moskalenko said. Gazeta.ru added that she coughed several times during her telephone interview.

"I think it may have been a demonstration because there was lots of it (mercury,)” Moskalenko told Ekho Moskvy. “How could you not notice it?"

She did not say who she thought might have been responsible in her radio interview, but told the Russian website Gazeta.ru she thought her involvement in bringing Politkovakya’s murderers occasioned the alleged attempt on her life.

Sergei Sokolov, editor of the fiercely independent and Kremlin critical Russian weekly Novaya Gazeta, however, said there is a wider array of people who might want Moskalenko silenced.

“Moskalenko has headed up a number of high profile cases, including representing Khodorkovksy and (Russian) citizens who have filed suit in the European Court (of Human Rights) against Russia,” he said.

The substance resembling mercury was discovered in Moskalekno’s car on Sunday morning, Sokolov said. He said that the interior carpeting in her car was somewhat loose, and when they were pulled free, several shiny liquid balls were discovered, Gazeta.ru reported.

It was at this point that Moskalenko called police, said Sokolov. It is unknown how long the substance had been in her car.

“We did a lot of driving around the city,” Gazeta.ru quoted her as saying.

Strasbourg assistant prosecutor Claude Palpacuer told Reuters an investigation had been opened. He said Moskalenko and members of her family had been invited to undergo a medical examination to check if they had been contaminated.

"The circumstances as well as her background are such that she is concerned," said the spokesman.

The results of the exam will be known within a few days, medical staff were quoted as saying. Sokolov added that positive results for poisoning may result in the family being hospitalised.

Moskalenko’s clients have included Khodorkovsky, who founded Russia’s oil giant Yukos, who is currently serving a prison sentence for fraud and tax evasion that many human rights activists, as well as Khodorkovksy himself, believe was a trumped up case, as the popular Khodorkovksy had publicly expressed vague wishes to pursue the Russian presidency while Vladimir Putin was in power.

Khodorkovksy’s Prosecutors applied to the Moscow Bar Association to have Moskalenko stripped of her right to practise as a lawyer, a step she said was designed to weaken Khodorkovsky’s defence.

She has also represented several Russian plaintiffs who have appealed to the European Court of Human Rights in Strasbourg.

The court has handed down dozens of rulings accusing Russia of human rights abuses and failures of its justice system, and some 70 percent of the cases that come before the court come from Russia, causing backlogs of five or more years.

Moskalenko has won 30 cases before the Strasbourg court, and has 100 that are currently under review.

Anna Stavitskaya, a lawyer representing Politkovskaya’s family, said her legal team would ask for the trial of the alleged accomplices in Politkovskaya’s assassins to be postponed because Moskalenko was unavailable, Sokolov said, though it was unclear whether the postponement would be granted.

The trial is scheduled to start in a Moscow military court on Wednesday.

Alexander Litvinenko, an émigré Kremlin critic living in London, died in 2006 from radiation poisoning. British police have named a Russian KGB officer and current Duma deputy, Andrei Luvoi as a suspect. He says he is innocent, and Russian officials have refused repeated extradition requests for him to stand trial in Britain. Litvineknko had been one of Mosckaleno’s clients.

Politkovskaya herself was nearly mortally poisoned while en route to Beslan in Northern Ossetia in September. 2004, where Chechen terrorists had taken over a school. She was forced to abandon her reporting trip. Three hundred and thrity four people were killed during a raid to rescue the hostage school children.  Moskalenko represented the relatives of the victims of the siege, which was one of the Russian military’s most botched and lethal rescue attempts in recent memory.

Her legal efforts have won her several international honors and distinctions, including the International Helsinki Federation for Human Rights award.