Smoke covered the capital of Yakutia and residents were urged to stay indoors and close windows as a series of unprecedented wildfires blamed on climate change continued to ravage the Siberian region. 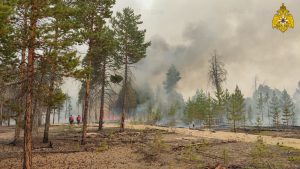 Smoke covered the capital of Yakutia and residents were urged to stay indoors and close windows as a series of unprecedented wildfires blamed on climate change continued to ravage the Siberian region.

“Obviously, there is only one reason: Global climate change,” Regional head Aisen Nikolaev was quoted as saying by The Moscow Times, citing the state-run RIA Novosti news agency. “We can see how it’s getting hotter in Yakutia every year. We are living through the hottest, driest summer in the history of meteorological measurements since the end of the 19th century.”

Russia’s largest, coldest region has been under a state of emergency for nearly a month due to the fast-spreading wildfires covering hundreds of thousands of hectares.

Heavy smoke from hundreds of wildfires raging across the region blanketed dozens of cities, including Yakutsk, causing a haze that has stretched as far as Anchorage, Alaska.

Local authorities have issued stay-at-home orders for Yakutia’s 280,000 residents and halted operations at the city’s airport due to poor visibility. More than 2,000 firefighters are battling scores of blazes in the region.

Scientists say that the huge fires have been made possible by the extraordinary summer heat in recent years in northern Siberia, which has been warming faster than any other part of the world. The fires may potentially accelerate climate change by releasing enormous quantities of greenhouse gases and destroying Russia’s vast boreal forests, which absorb carbon out of the atmosphere.

Last year, the record-setting fires in Yakutia released roughly as much carbon dioxide as did all the fuel consumption in Mexico in 2018, Mark Parrington, a senior scientist at the Copernicus Atmosphere Monitoring Service in Reading, England, told the New York Times.

This year, average June temperatures in the region surpassed 20 degrees Celsius, about 5 C above the historical average, Nikolaev said, RIA Novosti reported. The unusually hot temperatures were accompanied by record drought, with precipitation levels 16 times lower than normal, he said. Both factors combined have fueled the spread of the fires, regional officials have said.

Russia is uniquely vulnerable to climate change and the rising temperatures it brings, with two thirds of of its territory composed of permafrost, the frozen mixture of ice and soil, which warps the land, breaks apart roads and shifts building foundations as it thaws.

Alexander Kozlov, Russia’s minister of natural resources, has warned that fully 40% of buildings in the country’s high north are in danger of crumbling due to melting permafrost driven by climate change.

In total, Kozlov said the Russian economy stands to lose more than $67 billion by 2050 as the permafrost melts.

For years, President Putin rejected the fact that humans bear responsibility for the warming climate. But last month, he sounded a new message in his annual call-in show

with the Russian public, warning that the thawing permafrost could lead to “very serious social and economic consequences” for the country.

“Many believe, with good reason, that this is connected primarily to human activity, to emissions of pollutants into the atmosphere,” Putin told viewers. “Global warming is happening in our country even faster than in many other regions of the world.”

Putin signed a law this month requiring businesses to report their greenhouse gas emissions, paving the way toward carbon regulation in Russia, the world’s fourth-largest polluter.

But the legislation been criticized for failing to spell out penalties for those industries that emit excess emissions. Of further worry to international climate experts is the legislation’s reliance on Russia’s forests absorb any emissions overruns while also failing to spur initiatives that would stop carbon dioxide from reaching the atmosphere in the first place.

Indeed, the current barrage of wildfires is undermining that strategy, Nikolaev noted in his reported remarks.

“Undoubtedly, these [wildfires] are a very serious challenge facing our republic, and our country in general. Yakutia makes up one-third of Russia’s forests; the country should be very mindful and careful with its green lungs,” Nikolaev said, according to RIA Novosti.

Russia hosted John Kerry, President Biden’s climate envoy, for talks in Moscow this week, signaling it is prepared to work with Washington on combating global warming despite confrontations on other issues.