Bellona and Flåm AS: Paving the path to zero-emission tourism

To provide sustainable tourism that protects Flåm, the surrounding environment and the fjords, as well as comply with the new zero-emission 2026 policy, the tourism company Flåm AS will be working with Bellona to create green solutions for tourism. Flåm AS is one of the leading travel companies in Norway, organising trips in Flåm and the rest of Norway’s fjords. 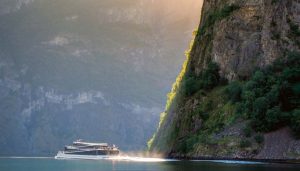 Future of the Fjords - electric sightseeing ship from Fjord AS Credit: Fjord AS

There are over 7 billion people inhabiting Planet Earth, which has led to issues concerning humans and their interaction with the environment. A particular problem that is becoming more prevalent is mass tourism.

Mass tourism is the most popular form of tourism that usually encompasses tens of thousands of people going to the same area around the same time of the year. It is normally associated with the cheapest way to holiday, promoted through package deals. However, it tends to overwhelm the environment, infrastructure, biodiversity and locals.

Currently many areas have been pushed to the edge, ravished by mass tourism. Some governments have begun reacting to this, trying to salvage the beautiful spots.

One popular example is Maya Bay on Ko Phi Phi Leh island, which became a popular spot after Leonardo DiCaprio’s movie, ‘The Beach’. Since the movie’s release in 2000, the Thai island has been frequented by over 5000 tourists and 200 boats per day. Due to the pollution from litter, boats and sunscreen, over 80% of the coral around the bay has been destroyed (i). The Thai government has decided to close the beach for 2 years to allow it to recover.

Many other places are beginning to follow suit. Borocay, Phillipines closed after the island was overwhelmed with pollution. This island became popular for hosting the “LaBoracay” parties that attracted 70,000 tourists. After one party in 2017, 10,000kg of trash was left behind (ii).

For many of these beautiful spots impacted by mass tourism, the damage that is done is often long-lasting and possibly unrecoverable. Norway, which has begun to see a huge spike in tourism, is starting to worry about its own environment.

Over the past seven years, Norway has seen a surge in tourism, particularly around the fjords. The release of the popular Disney movie, Frozen, inspired by Norway and its fjords, has attracted many people to come visit these breathtaking landscapes. Since the movie’s release, there has been an increase of 1.5 million cruise passenger visits in Norway. This is expected to rise to 4 million in 2019 according to the lobby group, Cruise Norway (iii).

Geiranger, a small Norwegian village, has just 215 permanent inhabitants, but is visited by about 700,000 tourists a year (iv). Fjords in Norway are facing the same overwhelming rush of new tourists and the infrastructure and environment are not prepared to handle it.

Flåm is a tiny village of 350 people in Southwestern Norway. Its scenery is breathtaking and encompasses the Sognefjord as well as the UNESCO-listed Aurlandsfjord. However, the beautiful, sleepy village has been shaken up since the boost in tourism in Norway.

Already the cruises that travel up the fjord to Flåm are pollutive to the sensitive environment. Locals complain of the heavy fuel oil in the air coming from the ships. The Norwegian Parliament adopted a new resolution that would allow only zero-emission vessels in 2026 to access its two fjord areas classified as World Heritage Sites, which includes Aurlandsfjord. In 2030, low- or zero-emission vessels will be applied to other fjords and Norwegian waters (v).

Flåm AS and Bellona

To provide sustainable tourism that protects Flåm, the surrounding environment and the fjords, as well as comply with the new zero-emission 2026 policy, the tourism company Flåm AS will be working with Bellona to create green solutions for tourism. Flåm AS is one of the leading travel companies in Norway, organizing trips in Flåm and the rest of Norway’s fjords.

Already, the company has developed sustainable measures in the area. The famous Flåm railway, which is operated in a 50/50 partnership between Flåm AS and Norwegian State Railways (VY), is electric. Flåm AS also has a joint venture and 50/50 partnership with Fjord 1 and The Fjords DA. Together they constructed the hybrid electric sightseeing boat Vision of the Fjords and the fully electric ship, Future of the Fjords.

Now Bellona, Flåm AS and future relevant stakeholders will collaborate to develop zero-emission tourism solutions. There will be focus particularly on decarbonising cruise ships through electrification and shore power, as well as buses so that tourists arriving to Flåm will minimise air and water pollution. Bellona will provide viable solutions as well as connect Flam AS to other organisations and companies that can further develop zero-emission tourism. While the project will focus on Flåm and the Fjords, what is applied here could by tailored to fit other popular tourist destinations and protect them from pollution caused by tourism.

iv. Orange, R. (2016, September 16). Norway slashes tourism adverts as it is overwhelmed thanks to ‘Frozen effect’. Retrieved August 12, 2019, from https://www.telegraph.co.uk/news/2016/09/16/norway-stops-promoting-tourism-as-it-is-overwhelmed-thanks-to-fr/

v. Hockenos, P. (2018, September 20). Norway’s Newest Ships Give a Glimpse Into the Future of Sustainable Seafaring. Retrieved August 10, 2019, from https://www.smithsonianmag.com/innovation/norways-newest-ships-give-glimpse-into-future-of-sustainable-seafaring-180970326/