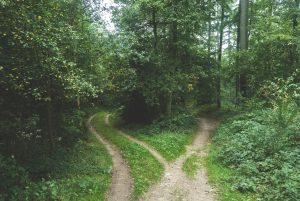 Over the past few decades, we have seen that the world has some potential to react to climate change and apply effective policy and measures to reverse potentially disastrous climate effects. In 1978 there was a ban of fluorocarbons from the market to prevent further damage to the ozone layer. Today in Europe, coal production has been on decline and is now seen as a sunset industry.

While sectors like construction and transport have begun to implement change, we see the industrial sector continuously shake their head stubbornly at any new climate policy. Many of them claim that any change to mitigate their emissions will have serious economic effects, with jobs lost and their competitive edge dulled. Yet, with their current emission trends, and tangible action in most other sectors, industries will become the largest CO2 emitters by 2050 making them accountable for future climate change disasters.

The industrial sector is currently playing out one of the ‘Choose Your Own Adventure’ books. There are three possible paths and outcomes that they can foresee.

The first path is one where industry immediately reacts by implementing effective action to cut their emissions and approach carbon neutrality, this would mean that the planet temperature would increase by ‘only’ 2°C. It would allow Earth to remain relatively stable and productive. Although a challenge, it is not impossible, and it is absolutely the best choice. Using strategies like Carbon Capture and Storage would provide them with more time to implement new technologies and methods. Pioneers in low-carbon products will likely gain large market shares. Furthermore, industrial jobs would be saved as industry would be fitted to have low to zero emissions, allowing them to continue to operate and grow. Decarbonised industries would no longer have to face public backlash due to their pollutive methods and would gain support from the public. Although it does cost to refit industry, overall, they would gain much more in return. They could continue to run, would not lose jobs, would gain the support from public and could even gain a competitive edge by becoming carbon neutral. Most environmental risks will have been mitigated and the market will continue as normal. 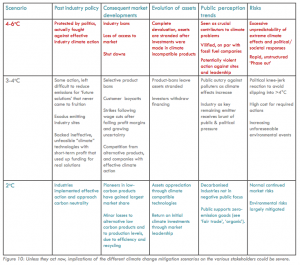 Chart displays the three possible scenarios that may occur based on climate action.

Should industry choose the second path, the outlook would be much bleaker for them and particularly for the world. Path 2 would mean that industry took some small immediate action today but for the most part, simply sat on their hands and hoped that new technology would appear and wipe away their mess. They would have relied on ineffective, unfeasible “climate” technologies with short term profit that wasted funding for what could have been effective solutions. Of course, because of these deliberately misguided and careless actions the planet would increase by 3-4°C. This in turn would mean bigger climate disasters, like massive droughts in Europe thus much smaller crop yields as well as serious flooding along the coast. In turn, industry would face some serious backlash, with customers boycotting, product bans, strikes after wages drop to minimize falling profit margins, and losing to competitive companies with effective climate action. In turn investors would withdraw financing and the public would see industry accountable to the climate disasters that took place. Furthermore, governments would react with dramatic action to avoid going above 4°C thus higher costs would be added. Clearly, path 2 is less than ideal, with severe reappraisals for industry in the future. It is not a good choice if you want continued positive growth with a stable future.

Path three is rather a high risk ‘adventure’ to choose with severe repercussions. In this path, industry would have been protected by politics and lobbying, and fought against effective industry climate action. This would lead to an increase of 4-6°C on earth, where we would begin to experience some terrifying climate disasters. Productivity of all cereals would decrease, leading to famine worldwide and there would be substantial burden on global health services. These severe climate effects will lead to destabilization in many countries, and unpredictable political and social responses would take form. Pollutive industries would be recognized as the crucial contributors to climate problems and would be vilified by the public and may experience potentially violent action against sites and leadership. 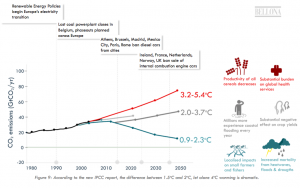 Graph displays the three different degrees and their associated scenarios.

While many people, as individuals, have made changes to their lifestyle to better help the planet, there is a limit to the effect. The Carbon Majors Database published a report in 2017 showing that 100 companies were responsible for 71% of global industrial GHG emissions. It is our responsibility as individuals to make our own positive changes, however it is even more important that industrial companies take responsibility and allow the planet and its people to have a better life. This requires them to take Path 1, and it would benefit everyone in the end. It is scary to think that industry is currently choosing the story that planet earth will live out, similar to a “choose your own adventure” book. It is important that as time goes by, we show our need to follow the first path rather than settle on what would be a terrifying scenario if we play out option two or three.