Climate change finally the most important issue to US Democratic voters. Will it last until Election Day?

For the past few American presidential election cycles, climate change has been the issue candidates can be counted on to steer clear of. But according to two new polls of registered Democratic voters, those who are lining up to take on Donald Trump in 2020 will ignore it at their peril.

For the past few American presidential election cycles, climate change has been the issue candidates can be counted on to steer clear of. But according to two new polls of registered Democratic voters, those who are lining up to take on Donald Trump in 2020 will ignore it at their peril.

One poll, taken last week by CNN, shows that 82 percent of those who plan to cast ballots for one of Trump’s Democratic challengers identify climate change as the most important issue on the agenda. That is, it’s more important to self-identified progressive voters than gun control or repairing the country’s broken healthcare system. It’s even more important to Democrats than impeaching Trump.

The second poll, this one taken by Monmouth University, showed that creating a universal healthcare system slightly edged out combatting climate change by one percentage point. But still, the two polls show that electing a president who will vigorously address climate change is more popular with many American voters than it ever has been before.

That’s an unexpected turn of political weather. Indeed, we’ve grown accustomed to the topic of climate change eliciting mere mumbles from American presidential candidates in every election since 2000.

As summarized by climate activist Bill McKibben in an essay for Politico, major campaign promises to fix global warming were last heard more than 30 years ago – in 1988, from a candidate as unlikely as Republican George HW Bush. But Bush’s promise to “fight the green house effect with the White House effect” failed to materialize after he took office.

Al Gore didn’t do much better. Gore, who later produced the Academy Award-winning documentary An Inconvenient Truth, hardly mentioned climate change during his presidential run against Bush’s son in 2000. When Barack Obama ran in 2008, he sidestepped the topic as well – though in his second term, his administration crafted some of the first policies aimed at slashing power plant and automotive emissions – policies Trump has been trying to undo since taking office.

When 2016 came around, not a single journalist posed the question of what to do about climate change to Hillary Clinton or Trump during their televised debates.

So what is different this time around?

From a political point of view, Trump is worse than weak on climate change. His entire approach to the issue is a cartoonish swirl of conspiracy theories undergirded by the usual Republican cosseting of the fossil fuel lobby. His administration has set out not so much to ignore climate science as to erase it by forbidding mention of it in official documents and on government websites and by scuttling federal funding for global warming research.

While his diehard voters cheer this approach, Trump’s war on the established facts of global warming ­– and beyond – has drawn the disgust of nearly everyone else. In that sense, a vote in favor of climate change is vote for objective, peer-reviewed reality – something many Americans are ready for after suffering through two and a half years of alternative facts.

What’s more is that a groundswell of activists outside the fray of US political parties is demanding it. Even Nancy Pelosi, the Democratic Speaker of the House, has been targeted by sit-ins demanding she sign onto more aggressive climate action.

The bulk of these protests, initiated by the young people Democrats are counting on for votes, are aimed at prodding politicians to support the Green New Deal, a policy initiative spearheaded by New York Representative Alexandria Ocasio-Cortez, herself the youngest person ever elected to US Congress. 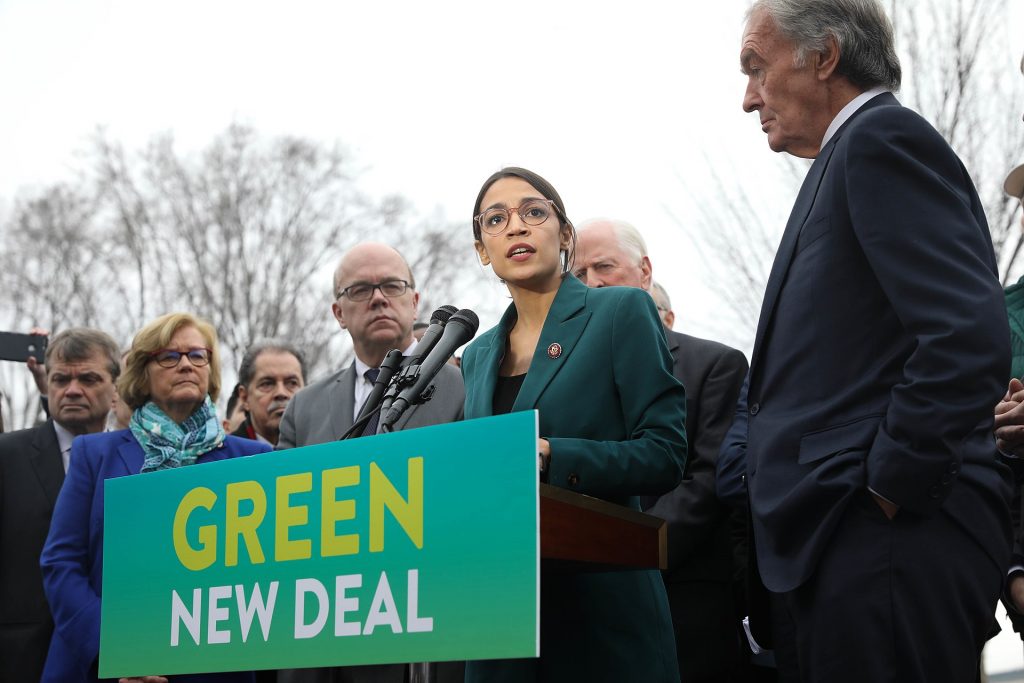 This deal, which would make the US emissions-free by 2050, is expansive and a little vague. But it has fast become a litmus test for the 22 candidates who are jostling to get the Democratic nomination to run against Trump. What could make – or break – the Green New Deal is that it focuses on not just combatting climate change, but addressing deep issues of social unfairness in American society.

By the Deal’s logic, climate change and economic and social inequality are linked and tackling one means tackling the other. In that light, the Deal’s demands of job guarantees within a vast and new green infrastructure – with the promise of universal healthcare to boot – incorporates most of the issues Democrats are concerned about going into the 2020 presidential race. A vote for one issue, Democratic voters seem to be saying, will mean a vote for the other.

So how each Democratic candidate brings together the broad promises of this sweeping deal is something their voters will be watching for. The Sunrise Movement, the grassroots group that helped put the Green New Deal on the political map, are holding 100 town halls across the country, which began last month.

Other powerful environmental groups are jumping aboard to hold the presidential pretenders accountable to their Green New Deal visions. McKibben’s group, called 350.org, will be keeping environmental scorecards on candidates in the democratic field. Part of their assessment of candidate’s environmental bona fides will be whether they pledge to refuse campaign funding from fossil fuel companies.

And already, many have sworn to do so. Elizabeth Warren, Bernie Sanders, Beto O’Rourke, Kirsten Gillibrand and Jay Inslee have all signed pledges saying their campaigns won’t accept any money from oil or coal.

The League of Conservation Voters, the deep-pocketed green group that spent over $80 million in last year’s midterm Congressional elections, aims to ensure the climate is not just a priority, but the highest priority for 2020 candidates, with a new campaign to influence the contest backed by an initial $2 million investment called Change the Climate 2020.

In two of the states holding influential primaries, doing something about climate change should be an easy sell. Parts of Iowa, which holds the first presidential primary caucuses early next year, are still underwater from catastrophic floods, while California just had its deadliest and most destructive wildfire season of all time.

Against that backdrop, groups like League of Conservation Voters want presidential candidates to go further than they have in the past.

They’ve been heartened, for instance, that O’Rourke chose to make a $5 trillion climate plan his first major policy rollout if he is elected. And Harris told MSNBC on Tuesday that climate change “represents an existential threat to who we are as a species.” For her part, Warren has come out against allowing federal land to be used for oil and gas drilling.

But it’s a long time until Election Day. Will the Democrats be able to keep fighting climate change at the center of the debate in what is bound to be an ugly campaign against Trump? According to these last two polls, their votes depend on it. So does the rest of the world.