President Barack Obama in his forth State of the Union address, while taking a strong stance on climate change, offered few concrete measures the US is willing to take to reduce its climate foot-print or overhaul American business to cut its emissions – but he did urge in non-specific terms that America “must do more to combat climate change” for future generations.

Published on February 12, 2013 by Charles Digges 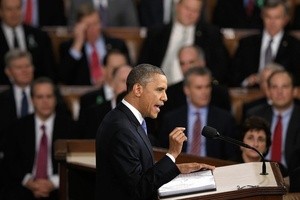 The address, which was widely expected from an ecological point of view to augment promises on combatting climate change laid out in his inauguration speech with specifics, did little to assuage a nervous environmental public.

But Obama may have taken a softened stance tonight in what sweeping measures he could continue to undertake because of his vast powers over the Environmental Protection Agency (EPA) based on his Congressional audience.

Yet, far from his pugilistic inauguration speech, which offered little in the way of bipartisan olive branches, tonight’s address focused heavily on breaking party lines to solve problems as diverse as national deficit reduction to spiraling education costs.

It’s central message hit on restoring the American middle class, levying higher taxes on the wealthy to lower national debt and restoring the US’s ailing economy, which has recently taken an unexpected downturn.

Though laudable goals on the domestic front, which re-establish Obama’s credentials as the president for the American underdog, the speech fell somewhat short of addressing specific environmental measures that would reduce the US’s climate footprint – the second largest in the world.

“The address was a mixed bag of encouraging promises backed by little in the way of actual environmental targets,” said Bellona advisor Svend Soeyland. “We caught a glimpse of Obama’s climate and energy goals, but little was spelled out in concrete terms as to how these goals would be achieved – these will presumably be undertaken by enhanced EPA regulation. “

Obama included a redoubled plug for his emissions cut bill that was shelved by the Senate in 2011 – while simultaneously suggesting that if Congress does not act, he will use his executive power over the EPA to reach his goals.

“The good news is, we can make meaningful progress on [the climate] while driving strong economic growth,” said Obama. “I urge this Congress to pursue a bipartisan, market-based solution to climate change, like the one John McCain and Joe Lieberman worked on together a few years ago,” he said, adding, “But if Congress won’t act soon to protect future generations, I will. ”

“I will direct my Cabinet to come up with executive actions we can take, now and in the future, to reduce pollution, prepare our communities for the consequences of climate change, and speed the transition to more sustainable sources of energy,” Obama said.

This, said Soeyland, was a targeted called to Congress that Obama will continue to flex his muscles to get what he wants in terms of US emissions reductions via the EPA whether a recalcitrant House and Senate decide to join the band wagon or not.

“Obama’s executive power over the EPA served him well during his first term from cutting auto emissions to dictating new coal-fired plans mush adhere to a carbon-free regime,” he said. “Obama’s second term climate goals will likely continue to be products of this executive privilege over the EPA should he continue to face a divided Congress.”

The energy offers Obama put on the table during his internationally televised address offered a hint of American energy independence through domestic oil and gas recovery – which according to Soeyland is short hand for further development of the environmentally controversial process of hydraulic fracturing, or “fracking” – a technique Bellona stands against until further regulation of water contamination and methane releases the young technique presents are implemented.

Obama’s support of more domestic oil recovery also refers to the Keystone XL pipeline, a dramatically greenhouse gas emitting oil project to the Athabasa oil sand in Alberta, Canada that Obama shelved in 2012 for further study – but which, given his bipartisan overtures in tonight’s speech could very well see its reinvigoration, according to Soeyland and Bellona President Frederic Hauge.

“A decision from Obama to continue Keystone XL to the Athabasca Oil Sands would be environmental catastrophic,” said Hauge. “Bringing tar sands oil to market burns more hydrocarbons, which is the dirtiest type of oil, leaving an enormous carbon footprint.”

Where were the climate goals of the first term?

Obama’s speech tacitly tied any climate measures proposed by his administration to job creation, and remained short on details on how America would go about achieving the climate goals he spelled out early in his first term.

Instead Obama gave a nod early in his the address to the bizarre weather trends that have hit the US over the past year, but offered no further road-map on how the US should address them.

He placed strong emphasis on following the science behind such phenomena, but left what America would do on the international stage to mitigate them unaddressed.

“[For] the sake of our children and our future, we must do more to combat climate change. Yes, it’s true that no single event makes a trend,” said Obama. “But the fact is, the 12 hottest years on record have all come in the last 15.”

“Heat waves, droughts, wildfires, and floods – all are now more frequent and intense,” he continued. “We can choose to believe that Superstorm Sandy, and the most severe drought in decades, and the worst wildfires some states have ever seen were all just a freak coincidence,” he said.

“Or we can choose to believe in the overwhelming judgment of science ­– and act before it’s too late.”

But acting before it’s too late is a relative term, according to Hauge.

“Instead it has, under pressure of domestic political issues, chosen to remain on the sidelines, as shown by its performance in recent UN climate summits,” said Hauge.

Despite the US’s non-committal attitude toward international climate treaties and the process toward forming them through the traditional labyrinth of the UN’s annual process of Conference of Party summits, Obama did tout domestic level accomplishments that Bellona both praises – and toward which it takes some caution.

“We have doubled the distance our cars will go on a gallon of gas, and the amount of renewable energy we generate from sources like wind and solar – with tens of thousands of good, American jobs to show for it,” Obama said in his address.

But Obama added that, “We produce more natural gas than ever before – and nearly everyone’s energy bill is lower because of it,” he said. “and over the last four years, our emissions of the dangerous carbon pollution that threatens our planet have actually fallen.”

Praiseworthy as these emissions cuts may be, said Hauge and Soeyland, American’s gas bonanza is still coming from shale gas and fracking, which they both say could be the cause of indeterminate ecological crises – especially as the rest of the world follows America’s example and tests the technology for itself.

One of the most recent sign-ons to fracking is Ukraine, which holds less than a pristine environmental record.

Though Obama was short on specifics about righting the climate course of the US, he held back in tonight’s address on the enormous power he wields to bypass a divided Congress through his power over the EPA – something that was likely best not to advertise before the joint session of the House and the Senate.

Obama’s efforts to pass his sweeping climate-change bill through Congress cratered in the Democratic-controlled Congress in 2010, and new legislation would have almost no chance of success in the current fractious Congress.

Sources close to the EPA told Bellona they expect a proposed rule will be issued by the end of this year, and EPA officials are already thinking about how it can be crafted to have the biggest environmental impact, cause the least economic harm, and stand up to the hurrican of legal, legislative, and political attacks that are sure to follow.

Obama and his team know full well that environmental regulations on energy are deeply politically unpopular ­– throughout his reelection campaign, Obama fought off a fusillade of attacks from Republicans slamming him for supporting so-called “job-killing regulations.”

But Obama appears prepared to take the heat to fight global warming via his secret weapon in the EPA process.

“He’s in the unique position now of never needing to run again, and he’s freer to do and say things that he hasn’t before – in terms of policy action, he’s got to be able to use the executive branch,” Anthony Leiserowitz, director of the Yale Project on Climate Change Communication, who recently briefed the White House on the latest polling on the public’s view on climate change, told Bellona by telephone. “The response I heard is that they’re looking at this very seriously.”

“The EPA is the strongest arrow in Obama’s quiver,” said Bellona’s Soeyland. “We can likely expect him to make further use of this weapon in his second term, unfettered by concerns of reelection.”