Diplomats from over 190 countries agreed on a draft text on green global development on Tuesday to be approved this week at the Rio+20 Earth Summit in Brazil, but environmentalists and negotiators complain the agreement is too weak. 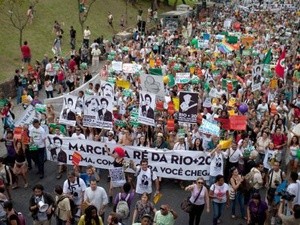 The landmark gathering, also known as the United Nations Conference on Sustainable Development, was hoped to be an anniversary celebration of the first Rio Earth Summit capped off with an agreement that would put the world on a more sustainable path.

Bellona, whose president Frederic Hauge is present at the summit, hopes the gloomy predictions will reverse as the text is discussed by leaders, and sees, however dim, a hope for the text to establish global processes for sustainable development goals (SDGs).

Indeed, the summit’s draft text is supposed to hammer out aspirational, rather than mandatory sustainable development goals in core areas like food security, water and energy.

But diplomats who were present for the final night of drafting the text world leaders are to sign at the three-day summit have told news agencies that what was expected to begin with a bang may likely end with a whimper, and that the 11th-hour text fails to define its goals or give clear timetables toward setting them

The European Union was unhappy with the level of ambition in the text, in particular Denmark, which holds the EU presidency.

“The EU would have liked to see a much more concrete and ambitious outcome, so in that respect I’m not happy with it,” said Danish Environment Minister Ida Auken, according to the BBC

It is “telling that nobody in that room adopting the text was happy. That’s how weak it is,” the European Union’s climate commissioner Connie Hedegaard said on social network Twitter.

“The text “has too much ‘take note’ and ‘reaffirm’ and too little ‘decide’ and ‘commit’. (The) big task now for UN nations to follow up” on this,” she added.

Svend Søyland, Bellona’s senior advisor on international energy and climate issues, agreed and said the arrival of world leaders may yet pull some important elements of the agreement out of the fire.

“This is not an uncommon situation. Tight mandates from national delegations and groups of delegations have made it close to impossible for them to come up with a meaningful text,” he said.

“It now up to heads of state to change the ‘take note’ and ‘reaffirm’ with ‘decide’ and ‘commit.’”

The first Rio Earth summit in 1992 made major advances for a global treaty on biodiversity, and the 1997 Kyoto Protocol on greenhouse gases, which is due to expire this year. The Rio+20 moniker is a nod to the 1992 summit.

Heads of state and ministers including French President Francois Hollande and US Secretary of State Hillary Clinton, will meet with diplomats representing other nations from Wednesday to discuss the text and possibly make some changes to its wording.

Russian Prime Minister Dmitry Medvedev will attend instead of President Vladimir Putin, according to Russian press reports. Indian Prime Minister Manmohan Singh and his Chinese counterpart Wen Jibao, will also be there.

Bellona’s Søyland stressed the negative impact the absence of these three leaders could deal to the Rio+20 text.

“Unless heads of State tighten up the text, they will deal a heavy blow to the UN as a system and its its relevance and credibility,” he said.

“Could someone please ask Obama, Cameron and Merkel to book airline tickets?”

Little chance agreement will be changed

However, US special envoy for climate change, Todd Stern, told reporters on Tuesday he did not expect the document to change significantly after heads of state meet to discuss it.

He described the deal as “a good step forward”

“We don’t have anything that we are expecting to try to drive into the document that is not there yet,” he told news agencies. “I believe this document is done,” he said pointing out that Brazil has “no plan or intention to let the document open up.”

According to Søyland, the inclusion in the text of a process that will eventually establish sustainable development goals “is a ray of hope.”

The UK’s environment minister, Caroline Spelman, praised the deal on SDGs as a “good outcome,” according to the BBC

“We have backed SDGs from the outset and helped drive them from a good idea to a new agreement that will elevate sustainability to the top of the agenda,” she said

But there is nothing in the agreement on what SDGs might promise.

What the current text is missing

Many environmental and development groups are dismayed by numerous aspects of the agreement that they say are missing after months of pressure and discussion.

Activists mounted a huge Twitter campaign on Monday in an attempt to persuade governments to commit to ending fossil fuel subsidies ­– something the Obama administration is pushing for in the US as well as globally.

However, the final text reaffirms previous commitments to phase them out if they are “harmful and inefficient,” without setting a date.

Phasing these subsidies by 2020 would reduce annual global energy demand by 5 percent and carbon dioxide emissions by nearly 6 percent, according to the International Energy Agency.

An eagerly awaited decision on a governance structure for the high seas was also postponed for three years, after the United States, Japan, Canada, Russia and Venezuela opposed strong language to implement it.

The text aslo calls for “urgent action” on unsustainable production and consumption, but it gives no detail or a timetable on how this can be achieved, and no clear direction as to how the world economy can be put on a greener path.

Developing countries might have agreed to go further with it had developed countries offered tangible financial support, but did not do so.

Further, corporations will not be obliged to measure their environmental and social performance. They are merely invited to do so.