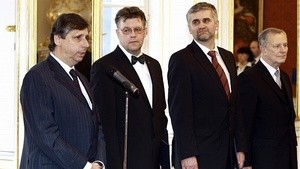 His resignation was a shot across the bow of Czech energy company CEZ’s refusal to make use of the best available technologies in the retrofit of the Prunerov II plant, as requited by law. The Czech state, which holds a nearly 70 percent controlling share in CEZ, has been accused by the Federal States of Micronesia, a Pacific Island state nearly 6,000 kilometres away, of contributing to climate related rising sea levels that threaten island nations worldwide (Read overview of Micronesia’s case against Prunerov II from Times Live).

Dusík’s resignation follows January’s claim by Micronesia against projected extensions at the Prunerov II plant, and just weeks before the Czech government’s parliamentary elections in which the Green Party hopes to secure a sufficient number of seats to guarantee their position in the next government.

The Czech Ministry of the Environment has gained recognition in the European Union for its climate policy work. Dusík in particular, has made a name for himself by refusing to involve himself with “dirty business” – those businesses that contribute to the Czech Republic’s reliance on fossil fuels – or to cave to the powerful lobbies of energy producers and the coal mining industry that have singled him out.

It is therefore no big surprise that Dusík resigned only a few months after accepting the nomination to the Environmental Ministry post to show that compromising on the Prunerov retrofit is unacceptable for him. This demonstration of courage and personal integrity is exemplary.

But why such a fuss about a single power plant?

The reasons are manifold. CEZ is planning to increase the energy efficiency of the power plant by roughly 39 percent by retrofitting it.

Yet the Det Norske Veritas (DNV), a Norwegain organisation for safeguarding life, property and the environment, found in a recent evaluation report commissioned by the Czech Ministry of Environment, that efficiency could reach 42 percent just by using better technology.

Although the DNV report did create some confusion because the Czech Ministry of Environment may have failed to provide all necessary information, it is clear that the already hugely polluting plant could easily reduce its CO2 emissions by using readily available technologies.

To its credit, CEZ did try to show “good will” by presenting an alternative – by sticking to the old retrofit in Prunerov and promising to save the 200,000 tonnes of CO2 elsewhere, a swell choice for Micronesia and Dusík: CEZ is really not getting the point, is it?

But, let’s ask the same question again with a slight rephrasing: Why the fuss over a simple resignation from an issue that lies far from the hearts of most Czechs?

Bellona is concerned that the Czech Republic is increasingly stepping back from its goal to become a consolidated market economy, which uses best available technologies. Instead, it lets state-owned companies continue to burn lignite coal – the most polluting variety – in forty year-old power plants, and Prime Minister Fischer is not even supporting his Environmental Minister in winning a seemingly simple fight.

Why was the 20th anniversary of the Velvet Revolution so modest? Simply because Czechs feel there is little to celebrate as they now live in a country where a simple retrofit of a coal power plant makes a green minister resign. That is the reason behind all the fuss.