When President-elect Barack Obama was sworn in today at half past eleven in the morning US East Coast time, the world officially welcomed an unprecedented shift in US policy and federal and international support for renewable energy and the battle on climate change – and the shift can’t come soon enough. To be sure, the millions who have gathered in Washington over the past few days to watch the culmination of Obama’s historic campaign and victory this morning were not waiting to hear messages on clean energy. But like investors, entrepreneurs, scientists, and engineers in the clean technology industry, they are anxious for change.

Published on January 19, 2009 by Charles Digges 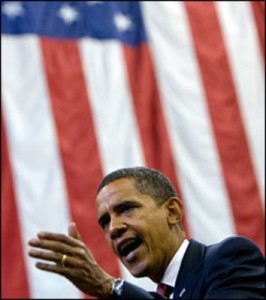 Jim Hansen, a NASA scientist and leading climate expert has cast Obama’s ascension in terms of a ticking clock, saying in interviews that Obama has four years to save the world.

"We cannot afford to put off change any longer," Hansen told the New York Observer over the weekend.

"We have to get on a new path within this new administration. We have only four years left for Obama to set an example to the rest of the world. America must take the lead."

The message is that we can still make changes, but we must act now, and action must be aggressive and dramatic.

The Bush Administration has managed to position the US on the wrong course on all climate issues, from the Kyoto Protocol to scientists like Hansen, who claims that his data on **CO2 reductions was censored by administration officials – only one of hundreds of scientists working within NASA, the Environmental Protection Administration (EPA) and other bases of US climate studies that have made such claims.

Obama has pledged, even before taking office – during which time he has been perhaps the most consulted President-elect in American history – more support toward the climate change battle than Bush set forth throughout his entire eight-year term. The proposed stimulus package, or “Green New Deal,” as the US press has dubbed it, contains $54 billion for clean power – a critical near term injection to ensure the survival of the clean power industry. Billions more have been pledged for more public transportation and clean water.

Obama has likewise called for a total of $150 billion to be invested over the next 10 years in clean and renewable energy source development. Obama has also placed pivotal scientists and policymakers who support his boost in funding for clean technologies in his cabinet, including Steven Chu as Energy Secretary, Lisa Jackson as EPA head, Carol Browner as Climate and Energy Czar, and Nancy Sutley as head of the White House Council on Environmental Quality.

Yet, it is still unclear whether the Green Stimulus Package will pass. Congress republicans and already shoving back. It is also unclear, as yet, whether the stimulus package would translate into the millions of new jobs Obama has promised a green revolution will bring.

In the meantime, emphasis on energy efficiency via intelligent grid investments and cutting mounting energy consumption is, according to Hansen and his colleagues, a smart road to take, as efficiency programmes cost utility programmes half of what building new power generation does, Salon.com reported.

Ultimately, however,  the Green New Deal stimulus package will only take clean power so far. The United States will need to find a way to put a price on carbon, either through a carbon tax or a cap-and-trade system – which is expected, despite what Obama wants, to be the focus of intense congressional debate. Further, both of these initiatives will probably have to wait until the economy has pulled out of its tailspin.

The next six months will be rocky for investments in solar, wind and other clean power projects, the New Energy Finance research group has said, despite the boom in these sectors noted toward the end of last year. But with Obama sworn into office, the United States can finally take the right road during this crucial time in environmental history.