UN commissioned climate report with concrete recommendations presented in US

WASHINGTON – A United Nations-commissioned report presented last week forwarded some of the most extreme measures to combat global climate change since the Stern report of October 2006, suggesting a ban on the construction of power plants that do not include carbon capture technology. 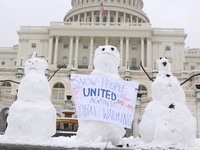 Presented last week in the United States – whose presidential administration has an especially hostile history toward evidence of global climate change – the report recommends a ban on building new plants that do not include technology to capture the carbon they produce so that it can later be disposed of in underground chambers to avoid air pollution.

The report, authored by the private organisation “The UN Foundation” on the UN’s request, also suggested pumping funding into research for renewable energy.

“The report puts pressure on the industrialised countries to spend more on research, and puts pressure on India and China to change their power production. Not in 15-20 years, but now,” said Svend Søyland, Bellona’s representative in Washington DC.

The report by The UN Foundation – which seeks to foster more support within the US establishment for the UN – differs from British government’s Stern Report on the catastrophic economic effects of global climate change, as well as reports by the UN’s own Inter-governmental Panel on Climate Change (IPCC) in that it offers more specific recommendations to politicians and decision-makers.

Banning of coal power plants without CO2 capture
Among the most blunt recommendations – and likely one of the most unpalatable in the United States’ current political climate – is an immediate ban on building new coal fired power stations that cannot accommodate carbon capture technology.

If this measure were adopted, it would, among other things, put a stop the construction of 11 proposed conventional coal fired plants slated for construction in Texas. The proposed building of the plants has caused a stir in the American environmental community, who have pressed hard against their construction.

A group of investors wishing to buy the utility that plans to build the plants has been somewhat persuaded by the environmental outcry. If the deal goes through, the investors say, they will build only eight of the 11 proposed plants.

International agreement
The report also recommends an international agreement that sets a limit for the increase in actual global warming, suggesting that government’s come to an accord that the worldwide temperature cannot exceed that of temperatures measured before the industrial revolution – which came into full force between 1830 and 1840 – by more than two to two and a half degrees Celsius.

The UN Foundation report also addressed the issue of “climate refugees,” or people who would be displaced by significantly rising sea levels and other environmental hardships. Would they, the report asks, be accorded the same protections offered by UN conventions on political refugees? And the report indicated that such a refugee surge would be significant – if sea levels increase by as little as three feet over the next 93 year, 130 million people – almost the population of Russia – would be displaced.

More funding to science
In order to combat these looming catastrophes, the report recommends significant worldwide increases in funding research for new energy technologies. The report even quantifies that grants funding such research must be increased by three to four times. For the Untied States, this means spending some $45 to $60 billion annually as opposed to the current budget of $3 billion funding such research.

Decisive among this work, said the report, is research on the capture and underground storage of carbon gas.

“The goals can’t be reached unless we get a global tax on climate gas emissions,” said Harvard University’s John Holdren, one of the report’s authors, in remarks reported by Reuters.

“The global community can only succeed with the depth and scale of the measures needed if an incentive is initiated – a price on CO2 emissions, either in the form of a CO2 tax or a system for quota trading,” he said.

“The US would rather go its own way, but this is a strong signal. The most decisive will in any case be how many large companies demands binding and predictable emission limits in the coming months,” said Søyland.

“But this report comes at a very favourable time here in the United States. Many companies are calling for binding emission limits, the largest unions support emissions cuts and investors view reduction of future CO2 emissions as an important factor when they choose to invest in energy companies,” Søyland added.